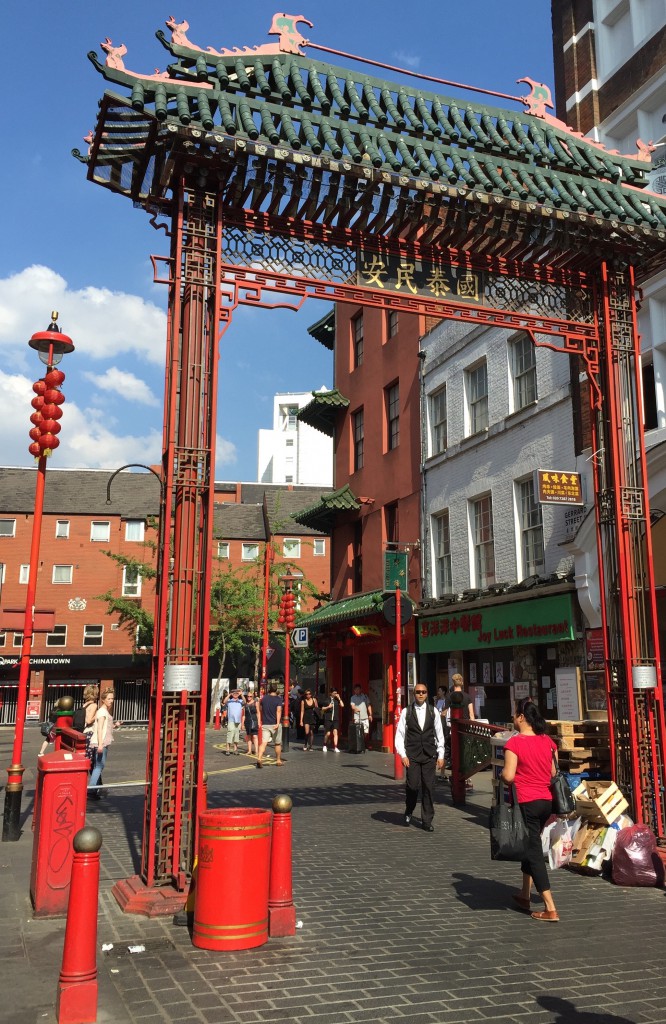 As we reach the narrow and empty street of London’s Chinatown, I couldn’t help but smell this tart whiff overwhelm me.  “This is it?” I ask my parents. We stand there astounded for a good two minutes. It is only when an old lady pulls on my white t-shirt that I feel present again in this moment. She accosts with the evasive question, “are you Chinese?” in Mandarin.

I shake my head and reply, “sorry, I don’t understand”.

She nods her wrinkly petite head and walks away. Her disappointed and surprised pair of aging eyes haunt me for the rest of the day.

Another old man pulling a ragged trolley bumps into me while asking if I speak Chinese. I almost want to reveal that my parents put me into Chinese school when I was a child, but I don’t. It feels like a betrayal to the western and white dominant society that has influenced me for the past 20 years. It feels like embarrassment.

Nobody ever wanted to play with the kid who ate rice during hot dog lunch days, wore clothes that have embarrassing floral patterns, did homework once school ended, and had a name with a million components and translations (you couldn’t call someone small fish right?).

Everyone wants to belong to the same monochrome crowd. Somewhere in the 20 years of my life, I’ve adopted a Canadian Born Chinese (CBC) identity. My friends say I belong in the common slang group: “banana”, where a person has yellow skin on the outside and a white personality on the inside. However, like most bananas, you can’t get a balance of both colours forever. You tend to rot when you are not peeled after a long time, revealing the forbidden treasure inside of you. At that point, I am a decaying mix of yellow and white.

I want to belong, and you can only belong if you are understood. So, when the next person asks me why I don’t speak Chinese, I give a shy and weak smile because I still don’t understand.

Recently, I travelled to London, coincidentally to their own Chinatown, and I was so astonished by how different it was from  Vancouver’s Chinatown.  It takes a couple steps to tour these simple streets, filled with people of all ethnicities, mostly a mix of British people and Asian people. I walk down a path and feel less importance than if I walked down Vancouver’s own Chinatown. I am seen as a spectacle, a sparkling jewel through their musty and littered streets because I am a tourist, a foreigner, a stranger in this community. I don’t know where I’m going; I don’t know anything about this place, its history, its beginning, its future, anything.

I walk through the street in wonder, looking at all the different restaurant or store plaques as if they’re ancient museum art. In Vancouver’s Chinatown, streets upon streets are flooded with Asian people because it is their place to roam. It is only during summer time where more tourists try to endeavour through the territory. The rest of the time, you see busy housewives fight for the best fresh fish of the day or homeless men pleading to be recognized. No one is adapting to anything, they are just how they are.

In London’s Chinatown, I see people of different ethnicities trying to order Chinese food. They pick fruits and vegetables that can only be eaten in Chinese dishes: the leafy vegetables like “choy sum” or “bok choy” and even the different melons like hairy “chi qua” or bitter melon. Since there aren’t any generic fast food restaurants around, some tourists actually squirm. “Rice for lunch? That’s ridiculous, the kids can’t eat this,” I hear a muscular man in white Nike shorts and a pair of basic sunglasses whisper to his wife. He carries the youngest boy on his shoulder, followed by his wife and daughter, through the buzzing street and hails an iconic black cab. Rice isn’t a common lunch food for most people; it is nothing compared to fish and chips.

Eventually my mother’s feet start wearing out along with my grumbling stomach, and we decide that it’s actually time for lunch. We pass the overflowing Chinese restaurants along the street, with an occasional shoebox Chinese herbal drugstore sandwiched in between. We finally find a quieter but reputable restaurant; we made the judgement based on how fancy the menu looked and how neat the restaurant was on the outside. Bad Stereotyping, I know.

As we enter, we are handed “whitewashed” menus, highly influenced by more western recognized dishes like “sweet and sour pork” or “beef and broccoli”. I don’t see the traditional soups or dishes, — marinated black fungus chicken soup or sichuan dry fried green beans entwined with little minced meats, — that my grandma makes for me at home, recipes that she learned from her mother, grandmother, and great grandmother. It takes a good ten minutes for us to decide on dishes we would never order back home in Vancouver, but would still be safe to eat at this point (It didn’t even taste good in the end). It is then that I realize that I don’t see the real and authentic Chinese culture in this so called “Chinatown”. It is all very purified, into a bland portrayal of the culture I grew up to respect and value.

After lunch, we decide to give this Chinatown one last chance. We stray from the bumbling food area towards the very few gift shops and bakeries. T-shirts are manufactured to commercialize and promote Chinatown, as if outdated and tacky designs somehow represent the culture that this town holds. When I reach a bakery, in hopes of buying my breakfast for the next day, a family from Australia asks me what a “lotus seed bun” is, despite the sign having both Chinese and English written on it, as if the appearance also doesn’t give it away. Here, in this part of Chinatown, I am used as a translation tool.

As the sun grew more yellow and radiant, my parents tell me, “it’s too hot, we don’t want heatstrokes do we?” We marvel our way out of this little Chinatown, back to the subway. Before we reach the opening, I turn back to take one last picture of the grand gate that meekly illustrates a part of what this Chinatown holds. While on the subway, I reflect on why I rarely visit Vancouver’s Chinatown. I wonder if it’s because I don’t like being assumed that I can speak Cantonese/ Mandarin just because of the colour of my skin, and having that represent all that I am. I wonder if it’s because I hate that Chinese history, as well as Asian History, is being camouflaged more and more by Western Society. However, Asian Canadians have come a long way. Despite being overshadowed by the pressures to be something we’re not– like the cake-faced dolls in over-exaggerated costumes that we saw in the rare gift shop — we are proud of our identity. We don’t have as much to prove as we did maybe a hundred years ago. Our culture is seen as a benevolent and bejewelled privilege. Our culture is ours to determine and discover.

After a week of observing this “white dominant” city, I realize that I am so proud of my Asian Canadian identity. Although I used to try to disguise myself in order to belong, I couldn’t wait to return to a community that is almost as yearning to learn more about this ancestral background as myself. Even though I have yellow skin, I’m more than just a colour or even a tool to be used. I am worth just the same as any other colour, cultural identity or racial roots. After being misinterpreted/mistaken as a person from China at the airport just before our flight, I whisper to my mom, “it’s time to go home.” I think she understood that in Chinese and in English.