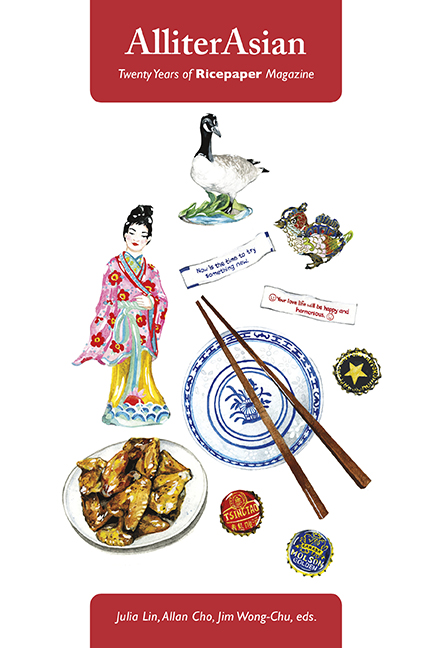 The long May evening was tapering to a close when the five speakers took to the front of the gallery at Centre A before a crowd of eager listeners. Crecien Bencio, Carolyn Nakagawa, Jackie Wong, C.E. Gatchalian, and Rita Wong read from their pieces in the Alliterasian anthology.

Twenty years after Ricepaper’s beginnings as a newsletter for the Asian Canadian Writer’s Workshop, Julia Lin, Allan Cho, and Jim Wong-Chu sat down to compile the best pieces from the magazine’s two decades.

267 pages of poetry and stories and non-fiction revolving around questions of identity, ideas of belonging, sexuality, and heritage found its way into print.

Here are some thoughts from some of our contributors, including Jackie Wong, Carolyn Nakagawa, and Rita Wong.

“Jim Wong-Chu assigned the story to me, as he was guest-editing an issue of Ricepaper celebrating Aboriginal and Asian writers. I was glad to write it, as the connections between Aboriginal and Asian communities in this city are widely felt but rarely documented. When I was assigned to this story, I had just met Jim Wong-Chu as I had interviewed him about neon history and Chinatown for the Museum of Vancouver’s first digital exhibition called the Visible City, which launched in spring 2013. I’m still interested in urban history and the inner city, but my work these days is focused on teaching, plus freelance writing and editing work.

Carolyn Nakagawa, ‘Research Update’ and ‘The Good Ones’

“I wrote my two poems in the anthology, “Research update” and “The good ones”, while doing research on Japanese Canadian history and culture for my coursework in UBC’s Asian Canadian and Asian Migration Studies program. Researching a community that my family belongs to but rarely spoke about was a complicated experience for me – I was both learning new things and constantly searching for things I would already recognize. Meanwhile I was still an English literature major taking creative writing classes in poetry (ACAM is a minor) and was continuing on this parallel life where my heritage wasn’t addressed – alongside the life where I was studying my heritage academically, and the life where I was trying to process what all of this meant. So both pieces were about me filtering these two outer lives through my emotional investments in both Japanese Canadian identity and in literature.”

“Writing History” is an article about a panel in 1998 where writers Sadhu Binning, Phinder Dulai, Betty Li and Susan Nishi discussed questions of how history and fiction are socially constructed. [It] is part of a much longer ongoing dialogue about the role of the writer, our responsibilities in society.

“Journey to the West” is a poem about how everyone has a responsibility to protect the beautiful coast on which we live—how those of us who are uninvited settlers or unsettlers on unceded Coast Salish homelands can become better guests by respecting Indigenous values and world views. [It] came about because I’m very moved by the incredible and beautiful efforts of the Tsleil Waututh Sacred Trust to protect this coast.

“[Finally] “body burden” is a poem expressing the ways in which pollution is interconnected and inescapable – when we poison the air & water, we inevitably also poison ourselves. “body burden” is a term which refers to the hundreds of chemicals that are now in our bodies, which were not there prior to World War II. It’s important to voice this and explore it, so that we can be psychologically prepared to deal with it.

“I love water, land, people, and hope people understand how our well-being and future rely deeply upon the health of the watersheds we live in as well as those we don’t live in. But there is so much that needs doing, such as stopping the Site C Dam from destroying Treaty 8 forests and farmlands. When you learn from water, there is so much interconnection and relationship to honour. Vancouver, where I live, gets roughly a third of its electricity from the Peace Region already. Though it’s been said that wars of the future will be fought over water the way they now are over oil, I believe deeply that water can also be the path to peace, not war, and I act on that belief to the best of my abilities.”

After the readings, Jim Wong-Chu, co-founder of Ricepaper, and the ACWW, was visibly nostalgic as he briefly described the magazine’s trajectory in front of the bar behind the gallery. He spoke about its simple beginnings before becoming a full-fledged print magazine, but over the years the various associated demands led to the decision to switch to our current digital format.

“Our job now is different; take Ricepaper and bring it back to the original idea of being a newsletter.” But his job was not over after that night-he would have to depart of an eastbound flight to Toronto the next day to launch the anthology there.

Ricepaper has changed over the years, and the launch at Centre A was a milestone of sorts. Old met new on East Georgia, the best pieces from the last twenty years appearing in print while we began the transition to an exciting new future. For those of you who have been with us all this time, thank you so much for your support; and for those of you who are just discovering us, welcome aboard.

Alliterasian is now available for sale from Arsenal Pulp Press.