With all the increasing development in Chinatown going on, many of its residents are concerned about the fact that these changes may irrevocably affect their neighborhood. 105 Keefer Street is currently the heart of a controversial development project that affects the adjacent memorial to Chinese-Canadian war veterans, and has serious implications for the future of the neighborhood. Vancouver author Edwin Lee writes about the layout of the area and the gas station that once existed there in this extract from his book Sum Yung Guys. 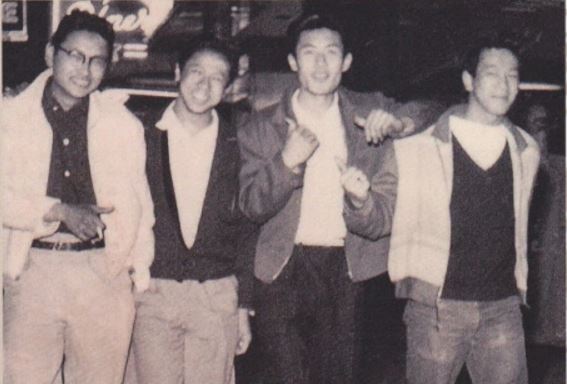 The [Columbia] corridor ran two blocks through the center of Chinatown from Keefer to Hastings Street and stretched to False Creek where a major overhaul took place in the mid-seventies. Land had become expensive and business expansion was limited. The area was transformed from a desolate no man’s land by filling the creek to add more development and to enlarge Chinatown. A committee was organised to focus on a Chinese Cultural Center. Historically the cultural organization was founded in 1973, with government Funds, coordinated with fifty Chinese organizations.

As a young boy growing up, this grassy knoll hidden behind Chinatown seemed like taking an adventure; walking through an unkempt dirt trail alongside False Creek. The area was laden with barges, fishing boats, power crafts, and even the odd houseboat, tied up to a small dock. Riding the trails alongside the creek shore with my bike I would encounter hobos using cardboard boxes to frame their shelter.

Creatively they constructed two sturdy tree branches, dug them into the ground, and used an empty soup can dangling in the middle of their campfire to reheat their meal. The bubbling odor of gourmet food almost seemed palatable. It had come from the restaurant’s garbage in the alleyways. With their million dollar view of water and the boats in False Creek, this was their “Paradise”. This is now the present location of the Chinese Cultural Center, and the over-pass is now called the Georgia Street Viaduct.

A stone’s throw distance from False Creek unveiled the Chinese Opera House. The two story old red building was where the Chinese Operas performed on week-ends. Both actors and musicians formed the famed “Wah Mee Sing Association”, which was similar to an Actors’ Guild in America. Many of these members were ordinary blue collar workers and housewives who had gifted talents.

The fabled stories composed of love with lots of action and drama, similar to an Italian opera. Their colorful silk costumes designed in intricate patterns were finished by hand-sewn sequins. The women’s costumes enhanced feminine movements that were created by adding light silk fabric extending beyond the hands. Their expressive use of hands and fingers controlled the delicate flow of silk. The head pieces and Chinese slippers were equally significant, often using a tiara banded around the head to appear like jewels. Wigs were used by both sexes. In order to dramatize the story, heavy make-up was used for the men and a softer look for the women.

Walking through the aisles to a seat, the crunching sounds of stepping on melon seed shells and paper wraps from packaged junk food seemed normal. The stiff wooden seats tested our backs; they were hard and uncomfortable. A full orchestra pit was situated in front of the stage with an array of Chinese string instruments and a set of drums to enhance the dramatic scenes.

Next to the famous Opera house was a Gas Station, with a small grocery store previously run by Ron’s father, Richard Chan. The four Lee brothers took over his location a few years later. The Lee Bros garage had a couple of gas pumps, but their main source of income was mechanical and body work. The four brothers, Harry, Hubie, Henry and Horace all looked like “Al Jolson” in make-up, immersed with grime from crawling under the vehicles on that dirty concrete floor. They were everyone’s friend and nothing was a challenge for them. They practically lived at the garage; it’s a wonder their marriages lasted since they were hardly ever home.

Like a band of brothers, they contributed towards the construction of the sixteen and twenty-six foot fishing craft belonging to my uncle Ken and his partner Joe Eng. I pitched in as the gopher to sand the framework of the hull and I managed to learn a little about fiber glassing. The fumes left you higher than smoking marijuana.

Together with my Uncle they formed the “Chinook fishing and hunting Club”, a real gung ho group of local Asian sportsmen. In fact if given a choice they would rather fish and hunt than eat.

The featured image comes from the cover of Edwin Lee’s self-published book. If you are concerned about the developments in the area, more information regarding this can be found at the Carnegie Community Action Project, the Chinatown Concern Group, and other interested parties. An online petition will be available soon.