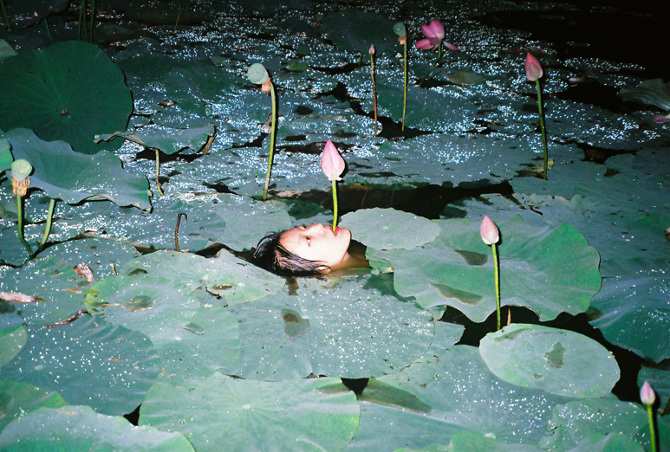 Good morning. Today, I’m using our web platform and the permission of the Ricepaper team to get a little personal.

A week ago, Chinese photographer Ren Hang took his own life. I didn’t know him personally or even speak to him, but his photographs and his attitude had such an impact on me. I know I’m not alone in this. There is power in art and there is power in words, but sometimes one can’t be used to describe the other. And as hard as I try, I still can’t summon the words to describe what I feel when I look at his photographs.

On the surface you see the naked bodies of his friends shining in the flash of his film camera, with penises and lips so red they remind you of what lies under their pale skin. Sometimes they’re accompanied by animals, animal parts, plants or trees. Other times they’re twisted or folded around each other in the weirdest positions. They are set against a plain wall, the city, or a fragment of natural landscape devoid of questions regarding their nakedness. Their gaze, into the camera and out at you, is always honest about their realness and the trust they had in Ren.

All that can seem so simple. But there’s something I feel so strongly from it. Perhaps it’s because as a half-Chinese girl, it’s empowering and uplifting to see the naked bodies of Chinese boys and girls. Perhaps it’s the unique poses that befuddle me so. Perhaps there’s a magic laced within I can’t understand.

I learned after the fact that Ren Hang wrote poetry too. There’s also a segment on his website with writings about his depression.

I’m not going to tell you to do or think something because life is short, or whatever. I wanted to bring your attention to him, just him. Ren Hang was 29 when he died and it pains me to know I’ll never see more work from him. He absolutely blew my mind.

This post was originally published in Ricepaper Magazine‘s March 3, 2017 newsletter.