Almost a year after a complicated return to Kuala Lumpur, Ricepaper editor William Tham reflects on family history and experiences in Malaysia. This is a follow-up to Muddy Confluence I: Impressions. 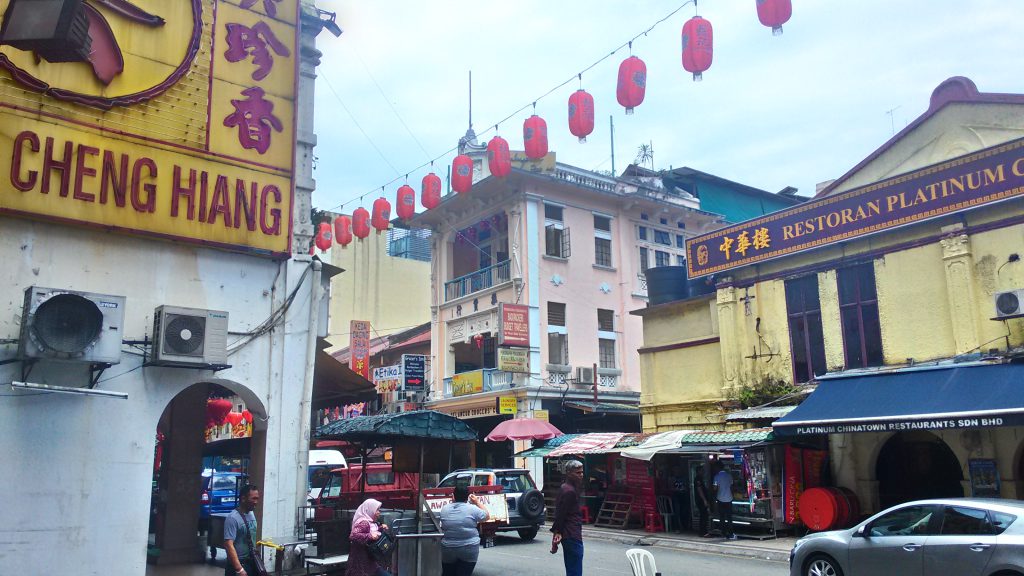 My father tends to avoid going down to the city with its endless traffic jams and uninspired food. But when Hari Raya arrived we drove down into the heart of the capital, emptied of its usual crowds. It was strange being back in KL again with my parents in front, driving through the same streets that I vaguely remembered from years before. It was like being a child again, except that I was a stranger in a familiar city. The friends that I had known were scattered, some of them still studying and living abroad while others had been forgotten, reverting from faces and personalities to vaguely familiar names. I had barely seen any of my relatives either-those fragile ties kept together by a network of dinners and reunions several years ago had finally splintered.

As we drove through the city my father eagerly pointed out familiar places-there in the alley was where he had gotten his hair cut! And just close by was where the young man who may or may not have been a licensed dentist extracted one of his teeth! And there was the corner coffeeshop where our relatives still ran a business that had lasted fifty years, the regulars drifting indoors under plastic fans in the drowsy afternoon heat, calling for Tiger beers and lager and cigarettes to while the day away! And over there-did we see it?-was where a cinema had once stood, the site of a massacre in 1969 when exiting patrons had been slaughtered by vicious mobs in the wake of race riots that had seized the city on May 13th. My father recounted people breaking curfew to sit on the curiously empty streets at night while soldiers flown in from Borneo patrolled the city with rifles.

Even today the country seethes with unspoken animosity. Words must be chosen carefully and spoken with caution. In the shadows a network of informants continues to operate under a system first put in place during the last days of colonial rule, now conveniently deployed to stifle dissent.

It was like being a child again, except that I was a stranger in a familiar city. 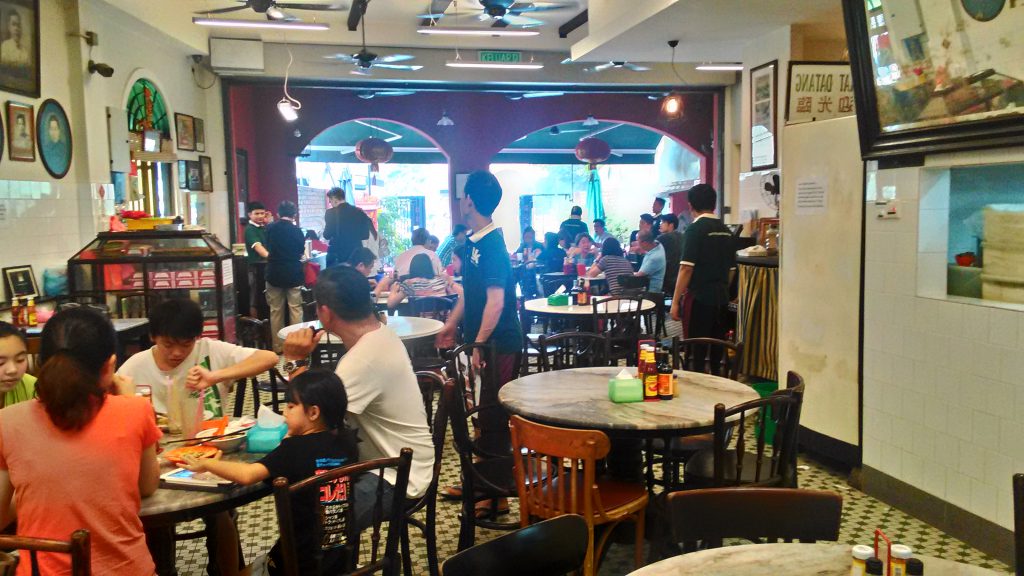 Jalan Sultan-Sultan Road in English-loops around Kuala Lumpur’s Chinatown, bustling with hotels and restaurants housed in century-old shophouses. This was where my father had lived as a kid, fighting the local children while attending classes at St. John’s. He had told us many stories as we grew up, reminiscing about the filth of Chinatown and his many misadventures, and how he had been horrified by his old digs when he returned on holiday from medical school in Australia. I had slowly pieced together his old stories and some of them found their way into mine. They formed the backbone of the crime dramas that I wrote from the comfort of Vancouver, gangsters without choices fighting for survival in a dangerous city that could turn on them with lightning speed.

It had been raining when we drove down. Overtaken by curiosity, I came down by myself a couple of days later on a dizzying sunlit afternoon. I walked down Jalan Sultan, trying to find Unit No. 60 but to no avail. Wandering down the road I looked like one of the tourists even though I was born in a nearby hospital. Somewhere in the vicinity was where my grandfather had operated a restaurant in the old days. Flushed with success from his hawker stall, he had turned his hand to a grander project. His Chinese restaurant came equipped with a stage, and was located on the fourth floor of a building. There he had a longstanding rivalry with the restauranteur on the third floor, whose staff constantly waylaid diners on their way up. So when the owner was found murdered the police had questioned my grandfather, suspecting that he had a motive for the killing.

But despite the competition, my grandfather’s restaurant had an unbeatable advantage.

Rose Chan, the famed ‘Queen of Striptease’ herself, was a returning guest performer on his stage. The Suzhou-born cabaret performer who had shot to fame after a wardrobe malfunction in Ipoh’s Majestic Theatre returned to sing Cantonese ballads from time to time, accompanied by her band. My father, still in primary school, recounted being seated with the rest of the children at a table while eager men packed the restaurant, fighting to see Rose Chan herself. These were the seedy days of Kuala Lumpur, with the amusement park at Bukit Bintang and the cabaret shows and streams of Commonwealth troops who thronged the city in anticipation of war with Indonesia. One of Rose Chan’s adopted daughters, who sat through the performance watching her mother dancing and singing, fell in love with the guitarist, his short hair slicked back. Later on the performances stopped. Rose Chan moved to Australia and later back to Malaysia to continue a colourful life while my grandfather’s restaurant shuttered.

Wandering down the road I looked like one of the tourists even though I was born in a nearby hospital. 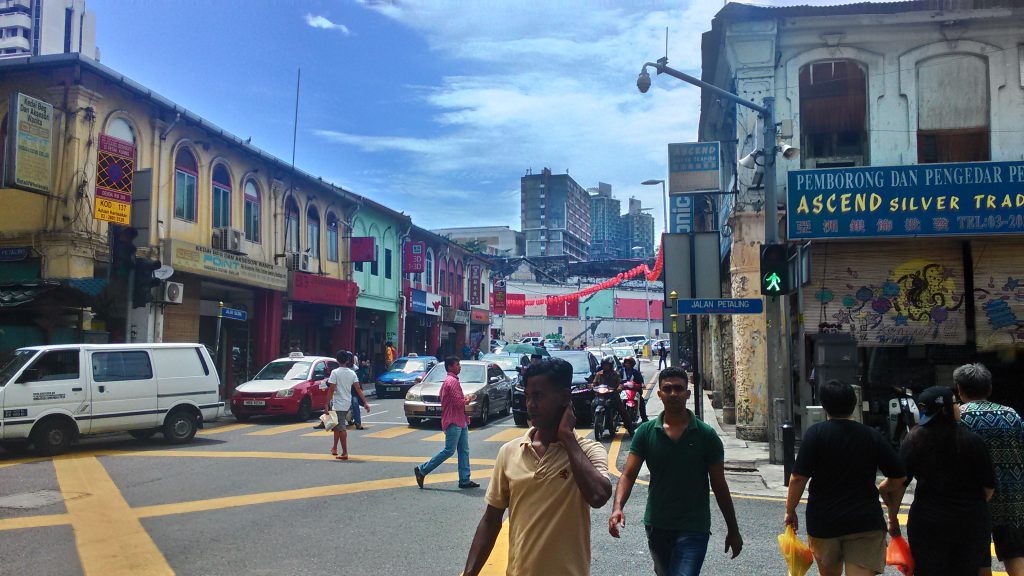 I paused to photograph Jalan Sultan. The Chinese residents were steadily leaving the area, and the restaurants had hired migrant workers from Burma as replacements, these workers wandering the pavements at lunch hour. Plain paper advertisements promised to remove liver spots, ring worms, black moles, and freckles in Chinese and English. Florists set up shop in alleyways, much charging less for their bouquets than the malls in the suburbs. And the old shophouses were refurbished, prettily painted for the visitors who left with the impression that the country was as harmonious and tolerant as the Tourism Malaysia brochures had promised. It was not very true, of course. To be Malaysian is to be suspicious of anyone and everyone else.

In one of those shophouses my father’s family had slept in one of the many miniscule rooms that had been partitioned out by the landlord, a pet chicken clucking in a cage with them. The house was constantly flooded and sanitation was dodgy at best. Outside in the back alley were armies of rats, cockroaches, and street food sellers, while drug dealers occasionally hid packets of heroin indoors when the cops gave chase. Next door to them lived an old woman who had once been wealthy, owning several shops and plenty of money, but after she had partitioned her property to her children they left her to fend for herself. When she died my father and his siblings were terrified, their imagination fuelled by the lurid Chinese ghost stories that they had grown up with. Spirits returning as butterflies and hungry ghosts released from the gates of Hell each year. Adding to the spectacle of death were the boarding houses where old folks, many of them amahs who had arrived from China to work, paid for bunks once they knew they were about to die, carried out again in caskets to the cemeteries…

It was not very true, of course. To be Malaysian is to be suspicious of anyone and everyone else.

Those were just some of the many stories that I had heard. Somewhere along the line my father became a doctor and the family left Chinatown for good.

“I have a lot of stories,” my father once told me. “You can write them down for me one day.”

Hi William, I’m a Malaysian from KL, and thank you for the pieces you’ve written on the city. Your imaginings and articulations of Kuala Lumpur are quite palpable, although I sense a darkness, a tinge of despair with these two pieces of your work regarding KL. Do you think this particular sentence is quite heavy, and carries quite a bit of judgment/suspicion/ill-will regarding Malaysia? “To be Malaysian is to be suspicious of anyone and everyone else.” In my opinion, it’s quite a sweeping statement – it would be good to have more explanation/elaboration on it.

Hi Rachel, thank you so much for your comment. This would be a good chance for me to clarify that particular sentence. When I was growing up in Malaysia I was always surrounded by relatives and friends who were consistently biased, racist, and judgmental–it didn’t help that pretty much every national or cultural institution reinforced it. This is a systematic problem that almost 60 years of Independence has sadly failed to resolve. Even after moving abroad many Malaysians I met still behaved the same way. While that particular sentence sounds harsh but it’s ultimately a subjective opinion that draws from the kind of environment I was raised in. I would say that Dr Farish Noor’s books offer a more detailed insight into the issues that I was trying to express. ‘What Your Teacher Didn’t Tell You’, adapted from his public lectures at the Annexe Gallery, was a huge inspiration and help when writing these articles.