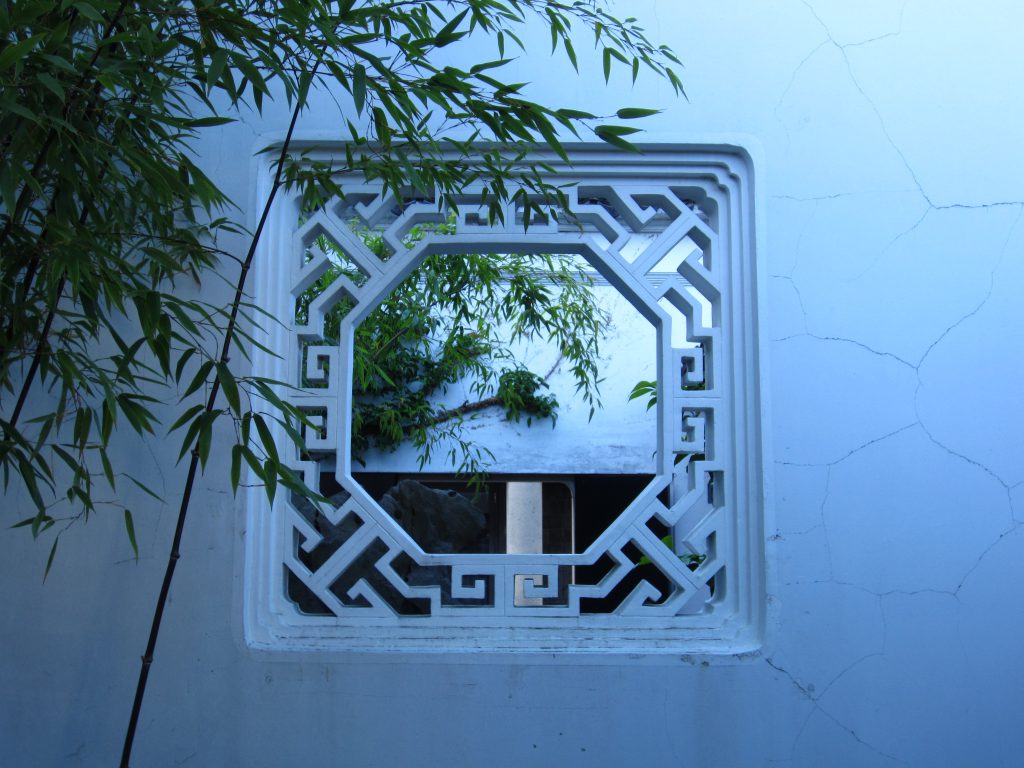 I have been spending a lot of time in the garden.

It is surprisingly large despite being confined to an area smaller than a quarter of a city block. Its corridors encircle a central courtyard where a pavilion with a tapered roof sits atop an artificial mountain. The pond has been temporarily drained and the brown clay that helps create green-jade reflections lies exposed, softened by the falling rain. Things which were never obvious before suddenly become clear. But despite signs of ongoing restoration the garden is still an idyllic escape from the city. Distant sirens of police cars from several blocks away fade out and the absence of large crowds is welcome.

I walk through this garden of forking paths, the soles of my shoes making little sound on terracotta tiles arranged in familiar herringbone patterns. Corners are never just corners—in each one there are surprising elements tucked away, like the calm recesses of the scholar’s courtyard or flexible bamboo shoots swaying in cold wind. It is mid-spring but there are few signs of seasonal blooms. The seeming lack of vibrant colours means that the garden looks largely unchanged across the seasons, as if awaiting capture in a long-exposure photograph. But there are always subtle differences in texture and mood as the weather changes. Things can appear and disappear unnoticed, often arranging themselves in unexpected configurations.

I look up. Beyond the garden, designed to replicate the stately Ming Dynasty architectural style, the apartments and skyscrapers of downtown Vancouver peer over the latticed roofs. I look around and I realise how accurate everything looks and feels, as if I am once again in one of the old gardens of southern China. For all I know the same craftsmen who built the garden in time for the 1986 Expo could have been involved in restoring its famous inspirations in Suzhou, thrashed by decades of war, rebellion, revolution, and eventually the tourist trade. It is curious how memories of my brief time in China still come back in sharp, vivid flashes, even though that was two years ago. Most of the details are vaguely faded, fused together by the humid heat of that summer, but others are vibrant as if they are still happening.

Despite signs of ongoing restoration the garden is still an idyllic escape from the city.

The garden is named in honour of Dr. Sun Yat-Sen, widely considered one of modern China’s greatest leaders despite a history of starting failed uprisings and not being involved in the decisive Wuchang uprising of 1911. During his years of exile, Dr. Sun had traveled widely across towns and cities where overseas Chinese set up homes. The Pacific Northwest was one of his many destinations, and he toured Victoria and Vancouver enthusiastically in order to raise funds for the eventual revolution. He once lodged on Pender Street under an assumed name, not far away from where the garden now stands. In the theatre on Shanghai Alley he made impassioned speeches about the need to donate, despite the heckling of some attendees who simply did not believe that he could ever be successful. A revolutionary with no money, no army, and not even the right language to communicate to the people—how could he ever succeed?

But when the news of the revolution eventually broke out on his cross-Canada trip to Montreal, he left as fast as he could, eventually returning to China where he became the president of a Kuomintang-governed Republic that would shortly find itself divided into factions vying for control. Dr. Sun’s exploits would go on to inspire the unconventional adventurer Morris Cohen of Edmonton, who later adopted the nickname ‘Two-Gun’ when he sailed into China to train the persecuted former president’s troops in firearms, claiming to be Dr. Sun’s aide-de-camp and carrying a pair of automatic pistols during his exploits.

I first heard about Two-Gun at the old Sun residence on what was once Rue Molière, in Shanghai’s former French Concession. The English-language exhibits were enthusiastic about Dr. Sun’s Canadian connections, and devoted many panels to telling the story of his Canadian odyssey, including details on Cohen, whom they called Ma Kun. Cohen would join a group of Canadians who featured prominently in China’s modern history and pop culture, sharing the same ground as the physician Norman Bethune and the celebrity Dashan. Outside the tranquil garden of the house, the streets of the city now bore proud revolutionary names. Double Tenth. Red Flag. People’s Road.

It was another bewildering episode in what was the beginning of a strange summer working in a university just north of the Yangtze River, where in the end everything would stop making sense. Classical gardens and tourist traps would get jumbled up, their distinguishing features vaguely playing on my mind. So did people and their personalities, different facets interchanging unpredictably. I eventually left China feeling like I understood it less than before I had arrived. Perhaps that was what Two-Gun felt while sitting in hotels in his later life, telling exaggerated stories of his exploits to his companions under the rule of the new Communist regime.

Walking in circuits around the garden was an exercise in recollecting the features of the places I had been. I recognised elements here and there, but putting them back together was another story. Pavilions, courtyards, and the intricate arrangement of lattices over rafters appeared in uncanny combinations. I knew them—but they were not the same, like the people I met along the way.

I eventually left China feeling like I understood it less than before I had arrived.

Winter had been gloomy, and spring so far had not been much better. The weather was sometimes miserable and for a brief spell I found myself wishing I had a beer every morning. But with the hint of summer on the horizon it was a good time to start anew. To do so it would be necessary to try to remember that some things had to be safely deposited in the past. The garden, with its familiar features, could serve as a personal repository of memories and possibilities. Contained within white walls in a corner of the city, it was a place that I could enter and depart at will. Within its hidden halls and ornate moon gates I could project any number of recollections and speculations into the spaces within. It was close enough to a replica of a real place from a real time, but ultimately it was just an imagining of the past.

The limestone rocks, worn and riddled with curious holes, stared back at me on my way out. They were once submerged in the waters of Lake Tai, shallow and vast and bristling with pearls. Some of those rocks adorned the old gardens of Jiangsu Province and now others found their way to a coastal city an ocean’s distance away. In preserving the sense and feel of another place it is necessary to be a curator of sorts, to choose only the essential details and to forget the extraneous ones.