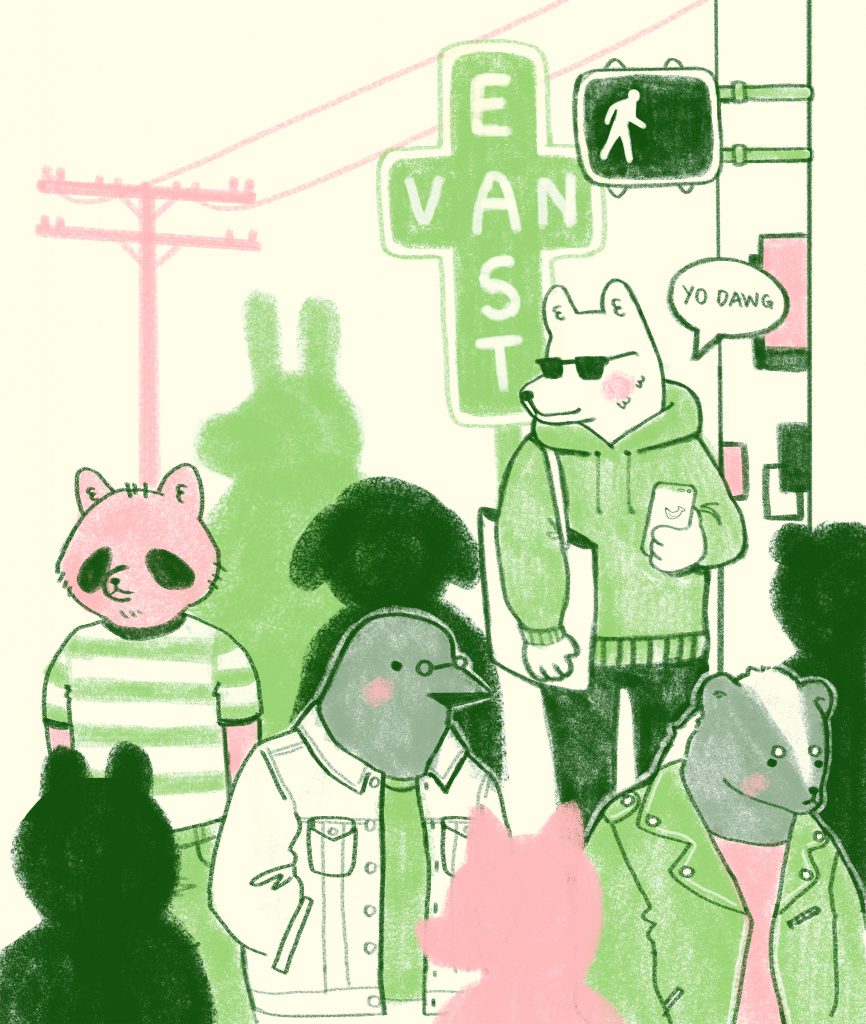 I respected raccoons the same way I respected people with guns. I was not entirely athletic nor did I possess exceptional martial arts ability. Raccoons were synonymous with rabies. I didn’t stand a chance.

My first encounter with raccoons was when I bumped into my seemingly non-existent neighbor and his belligerent Pomeranian. The raccoon family of three cornered us and for a second gauged our value. They left me alone and chased after the plaid-wearing neighbor and his third generation purebred pom. Since then, I neither heard nor seen them again. Then again, I’d neither seen nor heard from any of my neighbors in the first place.

I lived next to raccoons while my sister lived next to crows. When we both lived in our parents’ apartment in Burnaby, we had both raccoons and crows for neighbors. She resided in a crow-infested neighborhood in East Vancouver with her husband. I was a resident in the area for a year and I had my share of crows. For some reason that year, I also had a few raccoon neighbors.

“My roommate’s cat was almost mauled by a raccoon,” I said.

In any case, urban wildlife was strangely polite here in Vancouver, and they also didn’t seem to care about your presence. Maybe because people were rich and those who could afford to live here ate organic things. That trickle-down effect meant that the wildlife also ate organic food and probably ate things grown within a 100 mile radius, which explained the fat and docile state of the wildlife.

One thing I noticed with urban wildlife – in less than a second, both parties (myself and animal in question) quickly sized each other up and we eventually became locked into a hormonal mortal combat. In Toronto there was an excess of “fight” in any given critter leading to myself being in a constant state of “flight”. In Vancouver such phenomenon in my experience rarely occurred. What generally happened was an extended siege battle where nobody fought or fled. They lasted for a few minutes just enough for a brief exchange like weather inquiry or opinions regarding currently binge-watched shows, be it Game of Thrones or House of Cards.

Such silent conversations happened in my head and I’m confident that I could communicate my intentions 60% of the time because I neither died from rabies nor am I missing any appendages. I had walked away from 100% of my animal encounters unscathed. The 40% where I communicated wrong was because I added obscure pop culture references into such silent conversations. If most humans I encountered in my lifetime didn’t understand me, what more could wildlife? There was this one time when I bumped into a giant raccoon on the way home.

After you sir, I said.

No after you, the raccoon said.

I insist, go ahead, I have time.

No, I insist as well.

This war of politeness lasted a good minute. Then again, I was being practical. I didn’t have a gun and the raccoon most likely had rabies.

So, you seeing anyone right now?

That sucks. Have you tried polyamory? Works for us raccoons.

That’s too bad. Your food is great. Oh yeah I gotta run, happy hour in Tim Horton’s start in thirty. I’ll grab you a long john.

I’m good, I already went above my sugar allotment today, don’t let me keep you.

The raccoon ran off after that. Later that day, a half-eaten long john sat near where the raccoon and I had a Canadian standoff. Since the raccoon kept his promise, he was probably a good guy despite his questionable mating habits. When I was in Toronto, down at Scarborough, I bumped into a raccoon searching the trash. He chased me until I reached Markham. I guess he couldn’t afford to hang around in that side of town.

I respected skunks the same way. If I ran into a skunk, I usually engaged it in polite small talk, and respectfully declined when it asked for change. He would tell me how his day progressed before he moved on. Skunks sprayed people all the time. In 2016 alone I sold 78 bottles of hydrogen peroxide and I only worked thrice a week. Most likely those people flipped the bird or threw something at them. Vancouver skunks were the most polite urban animals I’ve bumped into for a while. All you had to do was be nice and treat them with respect. Toronto skunks, they sprayed first and asked questions later.

If most humans I encountered in my lifetime didn’t understand me, what more could wildlife?

I’ve had one run in with a coyote. It was a dog day evening, I walked home to Burnaby and a coyote bumped into me while on the same path. Yet again, I had to go through an awkward silent encounter with the beast.

Yo dawg, the coyote said.

You mean your pack?

Can’t say I have. Have you tried near Metrotown?

Can’t go there man. Pigs be savages. I’m on my way to New West right now.

Have you sent them a text or something? I’m sure you’ll bump into them sooner or later.

Then the coyote ran off. Poor guy. A little rough on the edges but I prefered them to dogs. Overfed pups either too stupid or too vicious, with a growing sense of entitlement.

Bears– one of the reasons why I stayed away from Coquitlam. Transit there took a good hour, everyone hung out at Roosters, and all the kids were into EDM.

I heard from a customer once that a bear ran into their cabin, ate all their food, and left a massive shit in the middle for everyone to see. I didn’t think that was a bear, that was her ex gaslighting her. A bear would most likely knock and attempt to switch you over to another phone plan.

A bear chased a co-worker once and he didn’t run. Bears ran at 45 mph, outrunning the average Canadian. It didn’t want to rip his head off– it merely wanted to recruit him to a MLM business. All he had to do was play dead, listen, and the little prick gave me as a reference. I received a call from an “unknown” caller who was most likely the bear’s supervisor. I didn’t answer, I heard they’re good at closing and I almost became a proud owner of a year’s subscription to green tea packages.

Closest encounter I had with bears was a time I rode a Greyhound to Kelowna. I observed a pair of young adult cubs in an alcove licking their paws and generally being carefree. I appreciated that moment because sooner or later they would be exposed to a random Whole Foods organic green bin, nitro cold brews, and avocado toasts. Such lifestyle changes and the unsustainable current habitat situation in the area would definitely lead them towards an incurable sales habit.

In any case, urban wildlife was strangely polite here in Vancouver, and they also didn’t seem to care about your presence.

Back to crows– my dad also attracted crows, not in a good way. When he was in Burnaby, a crow dive bombed him. This happened with different crows in New Westminster, Surrey, and in his smoking spot in White Rock.

“Dad, crows lean left. They would most likely vote NDP.”

“Now that I think about it, your mom was never attacked.”

“See. And crows gossip. They send a tweet out and you’re Persona non grata.”

My dad voted Trudeau in 2015 and strangely enough, the crows left him alone. Seagulls, however started to poop on his car.

I was in no way a shaman nor as the new age left called it a/an “[insert animal here] whisperer”. I became sensitive to wildlife communication since I had my vegetarian days. Those usually fell on a Tuesday and Thursday.

They said spend too long in the West Coast and you grow soft, spend too long in the East Coast and you grow hard. I was not warming up to Vancouver in any way but I fear I became stagnant. I meant to move to Toronto because though comfortable, I feel I didn’t fit in here. I had no steady friends and when someone from my social media contact list asked to hang out, I usually flaked or they did it for me. I didn’t do winter sports, didn’t like the outdoors, nor hiked.

Sometimes I wondered if Toronto was the right city for me. Though every time I thought about that squirrel who nearly ran me over at Yonge Street back in 2009, I decided to put up with a little loneliness.

I still respected raccoons though, now more than ever.

Vincent Ternida has been a finalist for Writer’s Guild Canada’s Diverse Screenwriters Program West in 2012-2013 and a second rounder for Austin Film Festival’s television spec script contest in 2013. When he’s not writing for his web comic Over The Counter, he’s working on short stories or a  new screenplay. Vincent lives in Vancouver.