I meet Tetsuro Miyazaki near Shinjuku Station. I arrived in Tokyo the day before, Tetsuro a few days before that. I’m jet-lagged and feeling haggard after an entire day spent in transit from Ireland. There are probably better times to get my photo taken.

Miyazaki orders two iced coffees. He says we will sit on the terrace, all in Japanese (of which I know very little). We sit, and I ask how fluent he is. “Pretty fluent. But you know the server just said, oh you speak such good Japanese!” (I didn’t, which should demonstrate how little Japanese I know.)

“They don’t mean it as belittling or condescending, but it is,” he says. “Why shouldn’t I speak fluent Japanese?”

And why should I? is the logical flipside of the question if I’m asked by other people whether I speak Japanese, or am met with regretful or what-a-pity reactions. But of course I also think it’s a pity. I’m trying to learn, but there’s a particular type of self-consciousness around attempting to speak it precisely because I feel like I should already be able to. I’ve developed a sort of Japanese-jealousy when I meet other hāfus who do have some fluency. It’s often revealing: how much of one culture or another were you raised with? Are you “more” of one nationality or another? Does being bilingual make you feel more double rather than half? 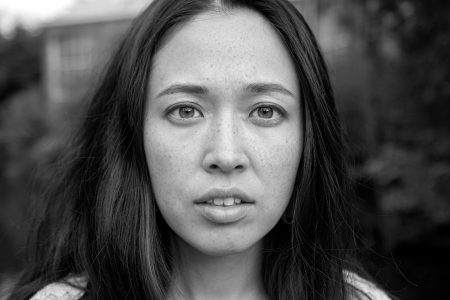 I’m not meeting Miyazaki for answers, but for more questions. Miyazaki is running a project called Hāfu2Hāfu, which began when Miyazaki began speaking to and photographing hāfu folks in the Netherlands, where he currently lives. Hāfu is a widely used term for half-Japanese, with duburo or double also used, but more rarely. Miyazaki is Japanese-Belgian; I am Japanese-Irish.

Hāfu2Hāfu was born when Miyazaki began to wonder what defined hāfu as an identity, what we have in common and what differences we have. The answer to this question turned out to be another question: what would hāfus like to ask each other if they had the chance?

So while Hāfu2Hāfu is ostensibly a project of portraits and interviews, it’s not the latter that’s shown; it’s the questions that arise from it. It’s surprising and thought-provoking, not just for those who read them, but for those who ask them. The questions are varied, some of which I have considered in the past, some I have never thought of before.

“Do you value the sense of humor at the same level in both countries?” asks Gianna Tomiyama.

“Who are you attracted to?” asks Zenn Kato.

“Often the question people come with is not what they really want to ask,” Miyazaki says. “It’s during our conversation that it starts to reveal itself, and then I try to pin it down to one simple question.”

I find this difficult (long letters easier than short ones and all) but Miyazaki is like the best of editors: he tries to understand what you want to say and then helps you say it as clearly as possible. It’s a vulnerable process—after all, it’s our own questions that preoccupy us, not the answers.

Miyazaki is only in Tokyo for three weeks, but he organizes meet-ups and events, and I attend several of them. I meet people who are half-Finnish, half-Kenyan, half-Moroccan, and we ask each other: what in your character do you think is Japanese? What religion were you raised with? Where do you feel like you belong? We are curious about our intersections and our negotiations. There are exclamations of “me too!”—the recognition of shared experiences. It may be that many of us have become accustomed to explaining our identity with rehearsed answers that we are eager to question each other and to answer more openly.

For Miyazaki, the idea of these choices is particularly distilled in practicing kendo. “When the kendo masters come from Japan, the Belgians high five them and hug them, but I don’t know what to do. I try to be Japanese, so I can’t high five them, I want to bow but that doesn’t feel exactly right. I’m not comfortable as either. Even now, it’s like experiencing vertigo, looking over the edge. Or it’s like a bruise, you touch it to see if it still hurts.”

It’s a feeling I’ve experienced myself, in situations when differences are thrown into relief, or when you feel as though you have to choose between identities. In fact, shortly after meeting Miyazaki, I went to an Irish music festival in Tokyo where I felt this acutely, finding myself neither Irish nor Japanese enough.

So why does Miyazaki keep practicing kendo?

“I made the choice to continue when I was sixteen. Kendo is the endless repetition of failing, because there’s always something you can do better. You’re never going to complete it but you’re going to die trying.”

Very Japanese, I say, because that’s a trait I think I have (in a milder form, maybe) that I do associate with my Japanese half. But now I wonder, is it reductive to attribute this to one nationality or another? Is it true? An element common to mixed-race experience seems to be this debate between dualities. There is an instinct to define parts of ourselves as one thing or another; but there is a resistance to that, too, a desire to find a synthesis rather than a choice. 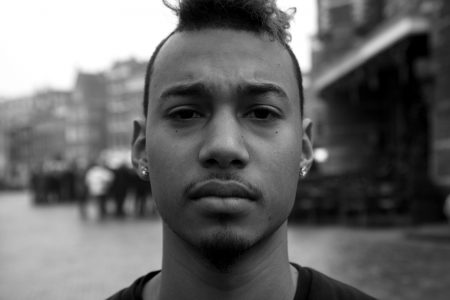 Miyazaki brought the project to the Hapa Japan Festival in Los Angeles earlier this year, where it connected with attendees, so much so that Miyazaki was encouraged to go further. “There was some drinking, dancing, and I said that I should photograph a hāfu from every country. Everyone said, yeah! And the next day, I wondered what exactly I had promised.” There are 192 sovereign states. As less-than-sober promises go, it’s an ambitious—but not regrettable—one. And Miyazaki gained support: on June 12th the Hapa Japan Project at the University of Southern California announced their partnership, funding Hāfu2Hāfu to help it expand globally.

When I first meet Miyazaki, he’s about ten percent of way through his goal. “But it’s the easiest ten percent, you get the most common ones first. It’s a bit like catching Pokémon.” Three weeks later, Miyazaki has photographed twenty-six people, and will be adding them to the Hāfu2Hāfu website in August. “I’ve never worked so hard, and I’ve never enjoyed work so much. Because I’m hearing people’s stories and they’re telling me personal things, so it requires a lot of focus. And I’m telling them my story, too. I have to be very present.”

It’s the situation Miyazaki and I are in now: what begins as interviews becomes a discussion of assumptions, reductions, and stereotypes; and how they occur and how to move beyond them. As he says, “That’s what I would like it to be. It shouldn’t be one-sided. It should be a conversation. It should be an exchange.”

Perhaps that’s an ideal of identity we can reach for: not a conclusion or the epiphany of being more of one thing or another. Half and double implies separate states, but an ongoing conversation between both reflects a more accurate state of being—that identities are often neither fixed nor definite. In speaking to other hāfus, in posing these questions, I found that there were very few firm or straight or easy conclusions—not now, at least. There were no answers, really–only stories.

Clara Kumagai’s fiction and nonfiction has appeared in The Stinging Fly, Banshee, and The Irish Times. She is currently working on a young adult novel set in Japan. She is from Ireland, Japan, and Canada. Follow Clara on Twitter @clarakiyoko.

HOW CAN YOU HELP?

Hi Clara, I am an Irish Japanese male also. Fantastic article! If you’d like any furthur participation in this study please do not hesistate to contact me.

Hi! My mother is Fafu! African American & Japanese! She has written a book (The Silk Box) about how her parents met in Japan! Would love to send you a copy!

Hi Clara,
I really love your article and I am taking one course which is the relevant topic in University now. I really like your point about “How much of one culture or another were you raised with? Are you “more” of one nationality or another? Does being bilingual make you feel more double rather than half?”. I am living in Vancouver which is a multi-culture city with many immigrants. People living in here have different colours but speak the same languages and taking same educations. As an immigrant, I have experienced the cultural differences in here. While the impact of the Chinese and Western cultures has brought a lot of inconvenience to me, but it has also allowed me to treat my life in more different ways. I work hard to learn the language and adapt to life.
The answer to “Does being bilingual make you feel more double rather than half?”. For me definitely is a good thing, I willing to learn new things and cultures. In here I can think about things in two different ways, a Chinese thought and Western thought, I can find the difference between two cultures.