Out by the farm, fixing the roof flying off of the house because of a storm named Janis, he feels something press against his leg. Rain drops, crashing against the aluminium roof, sound like voices. He listens and laughs, looking up to the sky, whispering a prayer for a time that isn’t now.

When I was growing up, my mother would send me to my lola while she left for work. Lola was young, with her hair lightly streaked with greys and blacks, her tanned skin and wrinkles impressing themselves onto her sooner than what age asked of her. Lola wasn’t my actual lola, both my lolas died years before I was able to meet them. Both my lolos died before I was born too. When my mother met lola, she found that lola reminded her of her mother. As time came by, my mother began to call her nanay instead of tita, which she graciously accepted. She was a nurse back home, but here she nannied for children with parents who took care of other children and cleaned hotel rooms.

She lived in a large house, with a garden full of lilies and carnations. Two of her favourite flowers. When she wasn’t taking care of the other children, she would be tending to the garden, whispering prayers into the leaves and petals around her garden. I would go out and play, searching for pill bugs and running around on my own. I imagined adventures in jungles far away from here, fighting mosquitos and dragonflies the size of Nissans. Some days, when the garden is quiet and the cars aren’t too loud, I would be able to hear voices. Voices that spoke in a language that I’m now no longer able to understand. Whenever I tried to speak to them, I was never sure whether they were speaking to me or to someone else. To recall any of what these voices said is beyond me, but their intonations sounded like blades cutting through air. I always felt most comfortable in the sounds of their voices.

Lola only spoke in Illocano. She refused to learn English, she didn’t trust the words in her mouth, but she would be able to understand me and the other kids she took care of, even if we switched between languages. The television was always on in her home. My grandmother would ask me to come in and help her cook adobo while Sesame Street played in the living room.

As time came by, my mother began to call her nanay instead of tita, which she graciously accepted.

I found ways to bruise and hurt myself, leaving me with scrapes across my body. Never intentional, but I would always have a small cut on my arm or finger. However, one time my leg was bruised up and bleeding from smashing my shins against a sharp rock around the gardens of lola’s house. My mother found me on the ground, coming back from work, and she immediately came to me. She looked calm and methodical. I felt it wash over. Blood and bruises no longer shocked me, but I had a struggle moving. I was still, uncertain of the consequences of where I was or what I was doing. My mother carried me through the bulbous plants of lola’s garden, and the voices muttered and whispered and inquired.

Mom propped my leg upon a chair and lola would come in, putting coconut oil on her hands, like she already knew that this was going to happen. She would rub the oil on my leg and begin to massage and press against my wound. I always cried whenever she did this. The pain of the cuts and the bruise left me with nothing else to do but to cry out. As she pressed and massaged the bruise, she would lull me to submission. Like a song. Hilot, she would sing. She used the word as a place of healing. Hilot, Hilot… Hilot, Hilot… 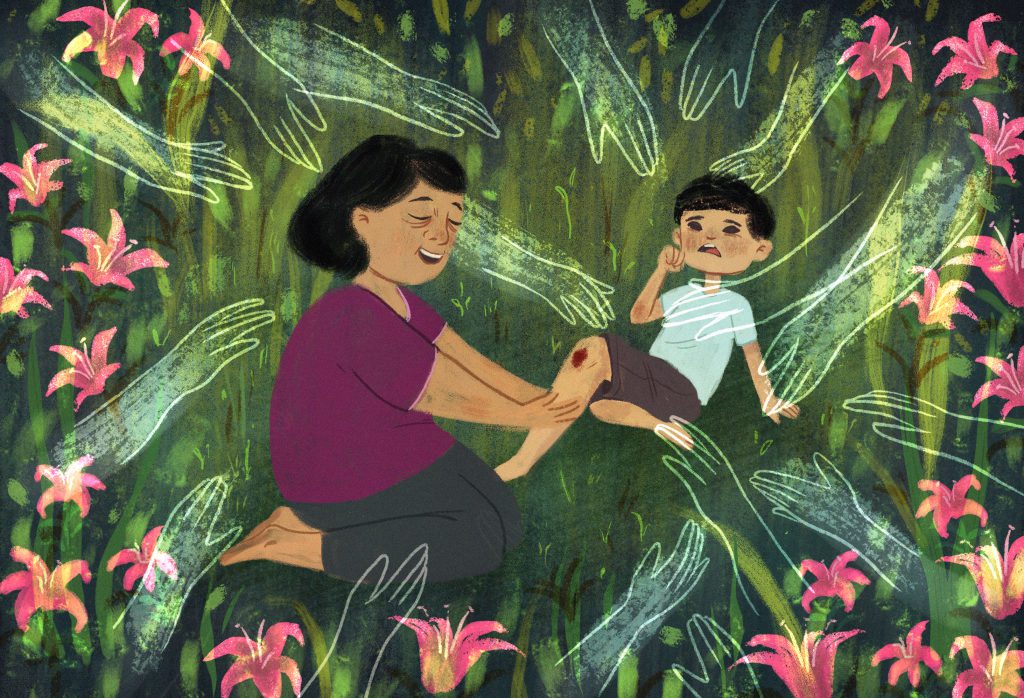 Lola told me that my screams would be heard across thousands of years. She told me that the pain that we feel and the cries we cry and the joys we experience are heard. Not only by us, but by our family in the past and the future. She told me my lolas heard my cries and my pain out in a place that isn’t now.

I stayed like this for a few days. She spent ten minutes of every day, pressing against my leg and singing the same words. I would also scream and cry. Every night, my mother would carry me on the bus, because walking would hurt too much, and by our next transfer, I would be asleep. By the fourth day, I stopped crying. Lola’s lullabies lost their song, but the affirmation remained. By the sixth day, I was able to run like my usual self.

I went outside. I sat down and I listened to the voices in lola’s garden. A collage of sounds that I understood then. I remember hearing laughter. Tones of voice call out ba lik by an. What does that mean?

I felt something poke inside my stomach. As if it was a light kick.

It is on the way to work when Magdalene thinks of her father again. The first thing she thinks of was his voice in heavy rain; the percussive hits across their home made of concrete while he read Annabel Lee out loud.

Magda’s family lived in Tarlac, where they ran a chicken farm. She helped feed and raise the chickens from birth to eventually selling them. Much of the chickens they were unable to sell became her family’s meals. Though the chicken tasted gamey, Magda felt an appreciation for them.

She thinks of the warm days she spent at home in December, compared to where she is now. Though the snow was non-existent, the cold breeze of winter weighed heavy. Nothing she had back home would prepare her for the cold air of the Pacific Northwest.

Magda feels a kick inside her stomach. She lightly rubs her stomach, hushing the baby, which feels like it’s coming sooner than she’s anticipating.

The baby’s father is kind, and wants to help take care of it. She appreciates the sentiment, but she isn’t sure if she trusts him or not. They’ve been seeing each other for a little while. She hasn’t heard from him in a few days. She left a message on his voicemail, with an inquiry about housing.

He isn’t Filipino, and she only knows a handful of things about him. He worked at a factory that made the prepackaged meals on airplanes. He played chess with a lot of the guys down at the beach. They met at a club while she was on a date with someone else, but he was adamant and had a penchant for dance, which she admired. She wonders if he would feel comfortable with going back home and raising the baby there. The bus doors opened, and Magda makes her way to the hockey stadium. She stands outside, watching people peter out. She isn’t sure whether or not the team won, she just hopes she is able to get into the stadium without being late for work, which her boss called her out on several times. He casually flirts with the idea of easy replacement, telling her there’s plenty of people who would be grateful for the work she’s taking for granted. Six other women stare at Magda in a line up.

The seven women adorn themselves in blue collars. They are also given rubber gloves, a broom, and a dustpan. They sweep down the scraps of food and trash over the course of seven hours, five if the trash isn’t heavy. With the six other women — Anna, Carmela, Trysta, Imelda, Esmerelda, and another woman named Magdalene; Magda spoke in Illocano, Tagalog and English, depending on who she spoke to. The other Magda spoke exclusively Cebuano, with brief traces of English, so if Magda wanted to tell the other Magda that there’s a handful of popcorn to sweep up, she would have to tell Esmerelda, who spoke Bikol, Tagalog, and Cebuano, to tell the other Magda about the popcorn.

He casually flirts with the idea of easy replacement, telling her there’s plenty of people who would be grateful for the work she’s taking for granted.

Asleep that night, Magda dreams of Tarlac. Night fallen over her concrete home. There was no rain outside, but the sound of heavy pouring beating down on her home’s aluminium roof is present. The heat blistering and beating upon her, she realized she wasn’t used to being in the heat as much as she did when she was young. Her home was full of guests. Family she recognized and people she felt vague recollections of. On the chair where she remembered her father sitting, was a young man that looked exactly like her father, reading her father’s collection of Edgar Allan Poe. She calls out to him in English, but he calls her mother in Tagalog.

He touches her face, her hair. She places her hands on his. He nods and smiles. She closes her eyes. Voices rise and crescendo. Ba hay.

Magda wakes up. Her room is cold in her basement apartment. She holds onto her stomach, feeling the baby kick. She stares up at the ceiling, whispering a prayer for a time that isn’t now.

Moses Clyde Caliboso is a poet, playwright, rapper, writer, performer, and barista. His work has been on display with W49, Urban Ink Productions, and the Arts Club Theatre Company’s LEAP program. He considers some of his influences and inspirations to be Frank Ocean, Pablo Neruda, Junot Diaz, Lydia Davis and Carlos Bulosan. His favourite cafe in Vancouver is Aubade Coffee.