As the cinematographer behind some of Wong Kar Wai’s earliest and best known films, Christopher Doyle’s colorful camerawork defined the look of Hong Kong for a generation. With over 80 films to his name in three decades of filmmaking, ranging from Zhang Yimou’s martial arts epic Hero to Gus Van Sant’s 1998 remake of Psycho, Doyle is legendary for his versatility, his eccentricity, and his dedication to helping first time directors and Hollywood outcasts. In recognition of not only his wide body of work, but also for his ongoing contributions to the field, Doyle was the subject of the Pierre Angénieux Excellens in Cinematography tribute at the 70th annual Cannes Film Festival in May of this year.

His 2015 film, Hong Kong Trilogy, sees Doyle returning to his roots. Told in three parts, the film explores the changing landscape of the city through the eyes of three generations of Hong Kongers: Preschooled children, Preoccupied youth, and Preposterous seniors. A collaboration with producers Jenny Suen and Ken Hui, Hong Kong Trilogy grew out of interviews with actual Hong Kong residents, from primary students Red Cap and Egg Tart Angel, to Canto-rapper Beat Box and feng shui master Thierry. Filmed in part during the height of the Occupy Central protests (better known as the Umbrella Movement), the film freely mixes documentary and narrative storytelling to create a unique portrait of a city at the crossroads.

Nick Stember: Admittedly, I’m a huge fan of your work, but I wonder with something so politically charged if you feel like people expected you to be giving answers? You know, Christopher Doyle makes a big statement, like Michael Moore or someone like that.

Christopher Doyle: The point is to embrace the image: whether it’s the image on has of oneself or where one hopes to arrive (as an artist, a banker, a good mother, or whatever). It’s not how society and the tabloids need to “closet” you: it’s a volition, hope, and intention to be more than you would be alone that allows a public persona to help you to hurdle through to a very free and giving space.

NS: In interviews, Jenny Suen (co-producer on Hong Kong Trilogy) has talked about wanting to create a space for people who wanted to express themselves. That strikes me very optimistic way of looking at film these days, when everyone is so focused on money and awards. It reminds me of the underground music bar in the second part of the film. They aren’t really doing it for anyone else, are they? Is there something about Hong Kong you think that makes places like this possible, or more likely?

CD: We are a city by the sea. The sea might be polluted with plastic now, and we must clean it up. The sea changes, so we have to shift with the tides. The best is that the sea is a woman, as I believe our Hong Kong is: Hong/ Xiang = fragrant, Kong / Gang = Harbour…it’s like the embrace of a lover: all we have to do is be true enough to her.

NS: You’ve spent more than half of your life in Hong Kong, and I wonder how you see yourself as fitting into the city.

CD: How is the city accommodating me? I ask through the films and this conversation. You tell me.

NS: Aside from Drunk Kevin, there are a lot of outsiders in this film. I thought it was interesting how you pulled together religion and art in the character of Thierry, the feng shui master. Did you and your producers go looking for people in specific professions? Or was it more random than that?

CD: There are people we wish we were, and even want to be. There are films about Wall street bankers, and prostitutes and people with lots of guns…and then there are films that celebrate slumdogs and the BBC Travel Show with Ade Adepitan who is a black guy in a wheelchair. The function of our works it to celebrate who and what you may have seen in passing and give it / them the integrity they have … and we all need to share. 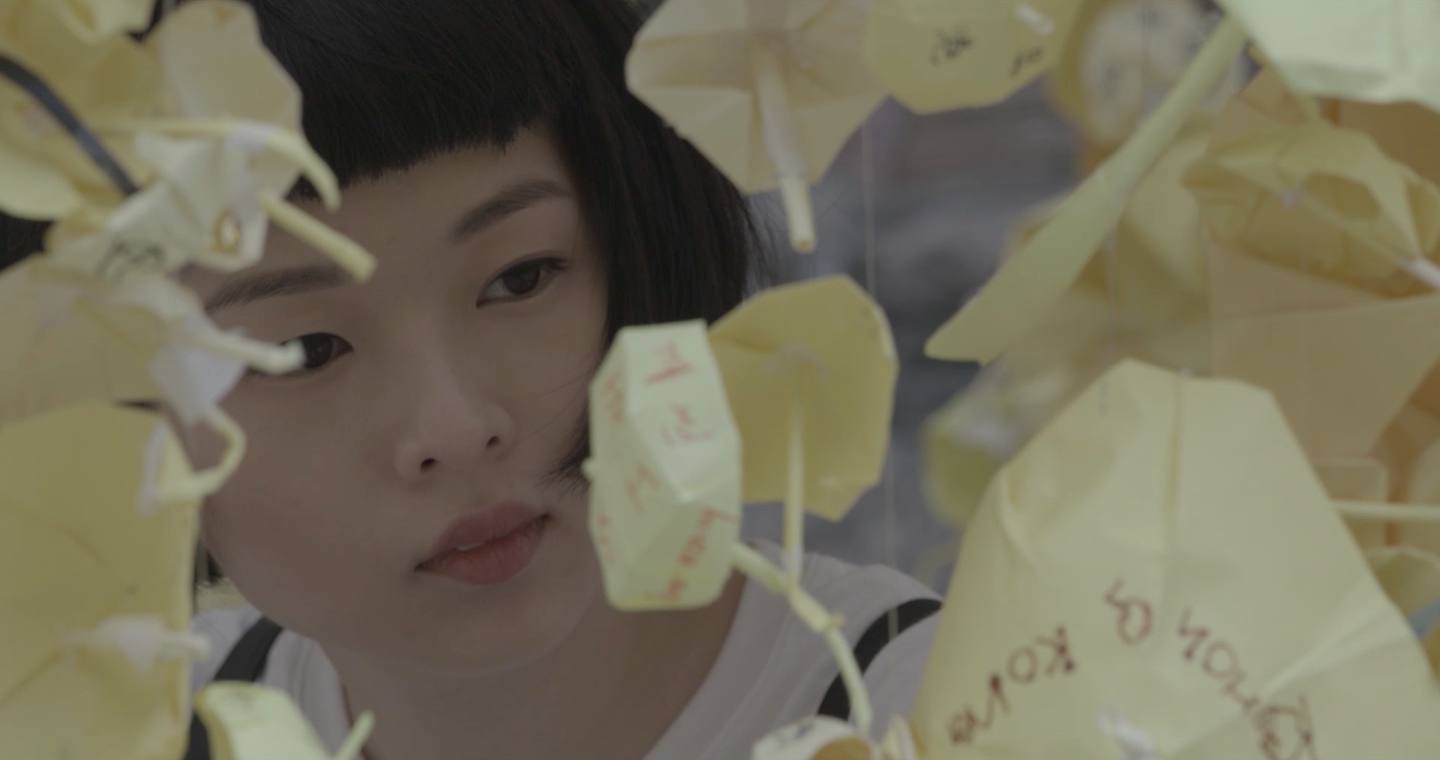 NS: I was really struck with the palette you use in this film–so many pastels and grey skies. We usually think of Hong Kong as being a very neon city, probably in part because of your work with Wong Kar-wai, and also places like Nathan Road. But you really seem to have captured another side to Hong Kong here. Is it more of a New Territories side? Or just being selective about where and when you shot?

CD: To me the so called “style” of a film (including all of my films, including the WKW ones most know best) comes from where it is set and what that space suggests. Budget and time and weather and all inform the “look” of my work . This film is the way it is because this place and these people took us there .

NS: I was also surprised by the number of static shots you used. It’s a very photographic film, almost like being in a gallery of moving pictures. When you come to a new project like this, how to start to work out the vocabulary of shots that you’re going to use?

CD: Never. As I said above the space informs the work. The money and the people give it this and that to work with. In the case of Preschooled, Preoccupied, Preposterous (what we prefer to call the Hong Kong Trilogy) the voices and the interest and the experiences of those who fill the film are those who made it the way it is. Static or hand – held or referring to someone else’s film are pretexts that never enter our process. PPP is exactly what we believe film must be: Personal / Poetic / and Political…not necessarily in that order

NS: I imagine being your own director gives you more freedom here. Have you ever felt pushed to make work in a more flash or commercial style?

CD: Send me the check and then we can talk.

NS: You’ve mentioned in other interviews that music plays a big role in your life, and I noticed that there’s a lot of music, and also poetry and lyrics as well. You close out the section on the Umbrella movement with an artist quoting a Li Bai poem:

花間一壺酒 In the flowers, a jug of wine

獨酌無相親 Drinking alone, without another

舉杯邀明月 I lift my cup and toast the moon 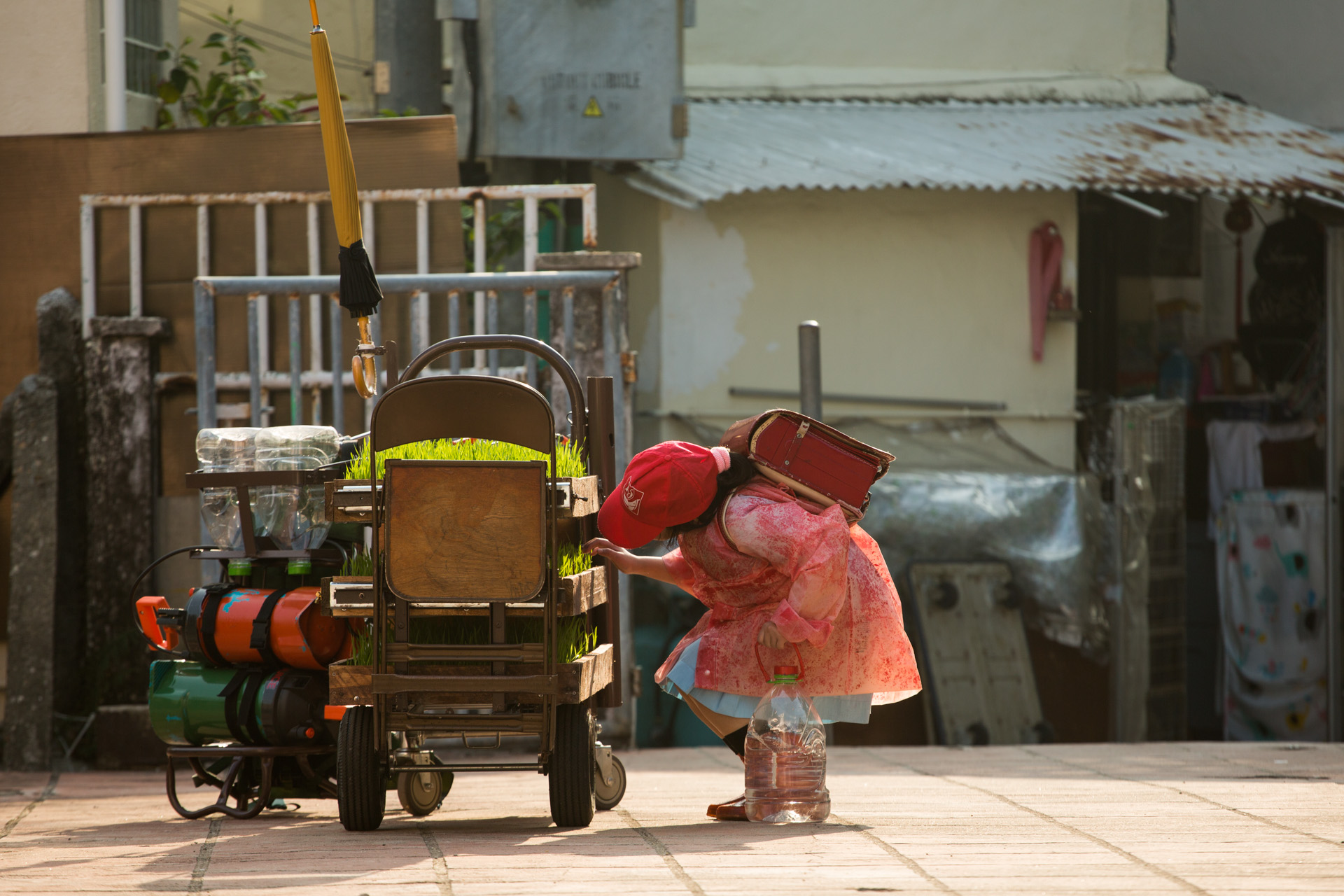 對影成三人 With my shadow, we make three

月既不解飲 But the moon does not drink

暫伴月將影 While the moon waxes and wanes

行樂需及春 And so I enjoy the spring while it lasts

我歌月徘徊 I call out in song to the moon above

我舞影零亂 Dancing, my shadow and I a pair

永結無情遊 Together forever and never

相期邈雲漢 We’ll meet in the stars

CD: Li Bai is supposed to have drowned trying to embrace his reflection in the water of the lake his drinking boat was crossing. I wish to make images drunk on ideas that you see yourself in. I want the audience to need to drink and blah blah with friends because of our film. 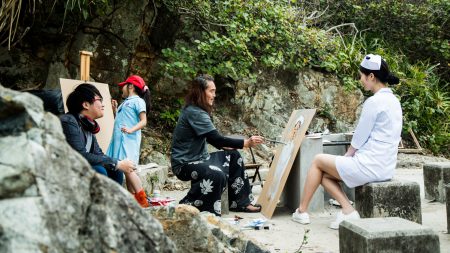 NS: The way the artist interprets this is a sort of hopelessness, saying “After what happened, what are we left with? Nothing.” But at the same time the fact that the people are still there seems to refute this hopelessness, in a way. Are you optimistic about the future of Hong Kong? How do you read this poem?

CD: I am an optimistic pessimist. I am a recovering Catholic. I believe that all the photos posted on social media actually make me a better image maker and make us all more open to what an image can share. And most importantly I believe if you love and trust and engage in a person or a place or an even very lofty idea it/they/ the place will give you so much back.

NS: Your next film, The White Girl, is another collaboration with Jenny Suen, “a tropical-noir love story set in the last fishing village in Hong Kong.” Do you see this film as being a sequel in a way to Hong Kong Trilogy? Or is it something completely different?

CD: I live in film … so The White Girl is another chapter in my and Jenny’s lives. We are not Fast and Furious numbers 6 ,7 and 8 … and yet yes we are celebrating the spaces and the people of a space that has given us so much. The wondrous thing is that one does actually grow in oneself in working and sharing with people who matter.

NS: With all that you’ve accomplished, do you have any regrets?

CD: I wish I could be Du Juan.