‘From: Joyelle and Isabelle, our daughters’ by Michael Yip3 min read

Alissa Cho doesn’t write “From: Aunt Alissa and Uncle Stevie” on the Christmas presents anymore. She and Stevie fight too much now and she worries if she writes their names side by side then whatever is inside the Christmas wrappings will get broken. Instead, Alissa writes “From: Joyelle and Isabelle, our daughters.”

Alissa hears from her sister that her nephew, Xander, doesn’t want gifts this year because he told a friend at school that he is a Buddhist. Xander’s friend told him, “Buddhists don’t get gifts at all.” Alissa bought Xander a plastic Buddha, then wrote “From: Joyelle and Isabelle, our daughters” on Buddha’s belly. 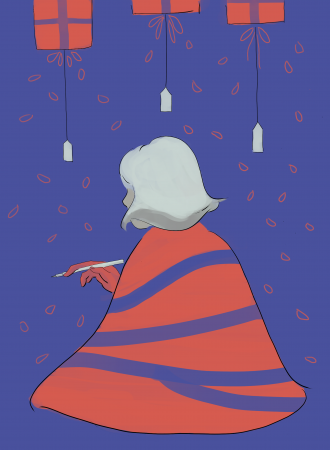 ​“I did not buy that for Xander,” Joyelle says.

​“Me neither,” Isabelle says. “That is from you. Take my name off it.”

​Alissa writes her daughters’ names on every present that she gives because it wouldn’t make sense to write her own name and Joyelle’s, or hers and Isabelle’s, and Stevie’s name wouldn’t fit beside the others either. All those holes in the drywall are from punches. Scabs across Alissa’s knuckles, and across Joyelle’s—Joyelle fights with Stevie too, are still oozy at their edges. The only people in the house who get along are Joyelle and Isabelle. That is why it makes Alissa happy to write “From: Joyelle and Isabelle, our daughters” on the Christmas presents. That way all the cousins know that Joyelle and Isabelle still do things together.

​For fifteen years, when Joyelle and Isabelle are in their twenties and thirties, Alissa cannot write “From: Joyelle and Isabelle, our daughters” on Christmas presents anymore because she does not see her sisters at Christmas. Papa’s will was a stinker. But then someone else’s will was shitty too—a third cousin who did not run away when the rest of them ran away from communists, and who actually wrote about money in their will, lots of it, millions—and everybody comes together again. Alissa uncaps a ballpoint pen and scribbles “From: Joyelle and Isabelle, our daughters” on every Christmas gift she buys. Alissa stacks the presents in a laundry basket and she drives, with Stevie, to her sister’s.

​Finally, Alissa thinks. Everybody gets to taste my chicken again. Finally, I get to move the furniture and tell my sisters all the holes across my walls are from my moving furniture again.

​But when Alissa shows up at her sister’s, only one of her two daughters is there: Isabelle, the younger. Isabelle says, “Mom. I don’t know why. All I know is that Joyelle is not coming.”

So Alissa turns around. She yells at Stevie. They are going home. At home, Alissa uncaps her ballpoint pen again. She writes new tags for all the presents. She yells at Stevie. They are going back to her sister’s, where she will finally get to see the babies that she’s only ever heard about in emails that are never sent to her because she can never remember the password to her email. Alissa will give those babies’ presents to their parents, nieces and nephews who Alissa will not recognize because the last time Alissa saw them they were in their twenties, in good shape, and still had two breasts instead of one. And Alissa will say, “Here. This is from Buddha. Blame Buddha. The end.”

Michael Yip grew up in Alberta. He has spent much of his life working in libraries. His writing and visual art have appeared in dandelion, fillingstation, and NōD magazines. His favourite animals are all the silly ones.