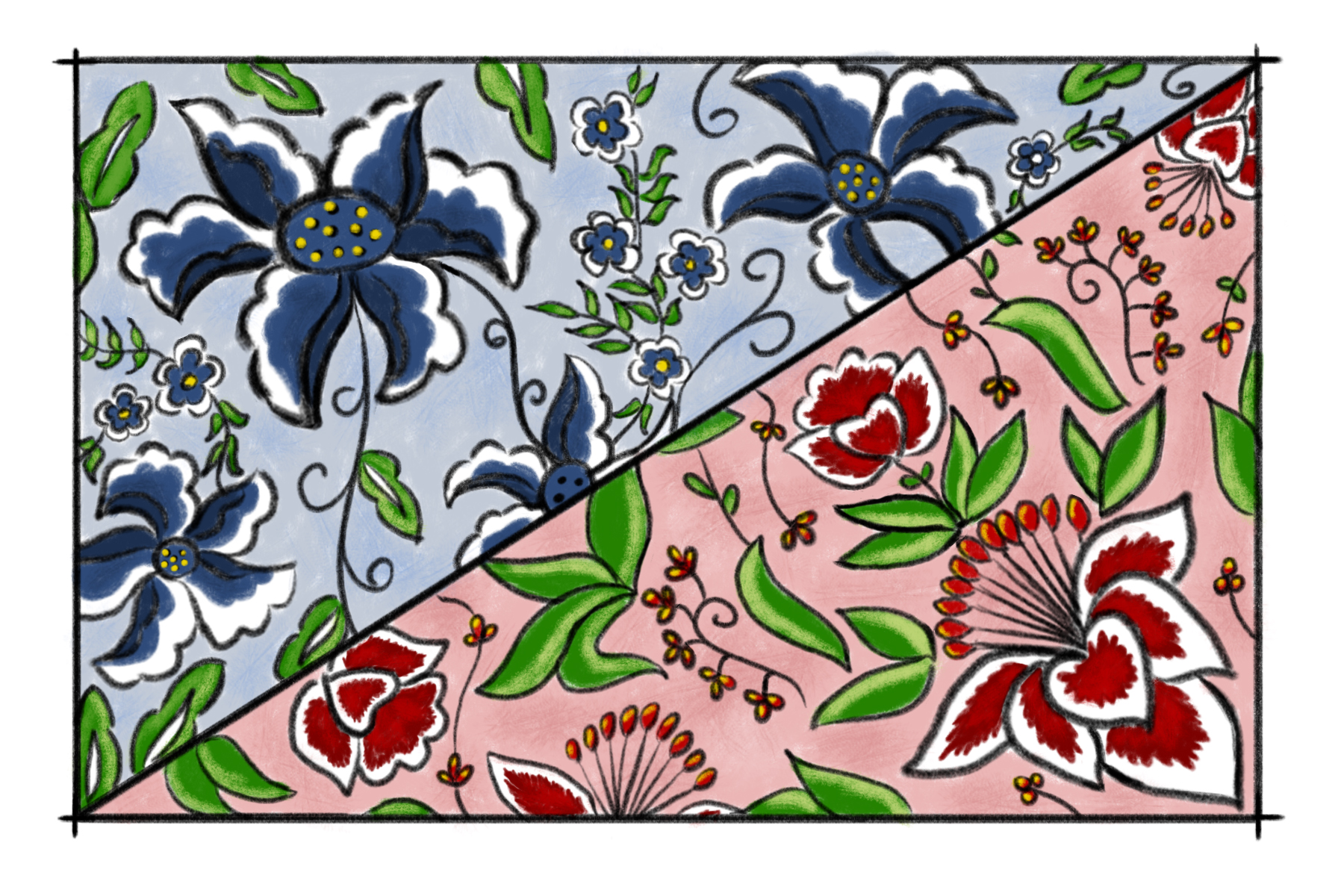 “Good combination,” Bibik Swee Neo said to herself while fastening her navy blue kebaya sulam with her favourite kerongsang rantai given to her by her late parents as a wedding gift in 1960. Her kerongsang rantai consists of three-linked brooches with a ballerina design, the tutu encrusted with intan or the rose diamond. The craftsmanship of the ballerina was so detailed that Bibik Swee Neo took this particular kerongsang as her ultimate choice to match with her huge collections of kebaya; the intan breathed sophistication to the everyday — to the simple kebaya biku, and to any of her intricately-embroidered kebaya sulam. After all, the great must always match with the great.

Growing up in the 1940s, the desire to pick up tips needed to make herself presentable and the skills needed in maintaining a functional house was so deeply entrenched in Bibik Swee Neo’s mind since a potential mother-in-law could gauge her femininity by just tuning in to the rhythm of her pounding the sambal belachan or by looking at her beading works. When one could already risk herself to be a spinster for the rest of her life just through the assessment of the sounds of the mortar and pestle and a glance at the products of the threads and needles, Bibik Swee Neo could not bear to imagine one failing to master the aesthetic sense of matching the sarong kebaya, not knowing how to pin the kerongsang ‘the Nyonya way,’ or leaving a strand of one’s hair untied. She certainly did not want to be a disgrace to her mother, who had dedicated her lifetime to mould Bibik Swee Neo in becoming a perfect wife and daughter-in-law.

Like her mother, Bibik Swee Neo emphasized the ideal looks of a nyonya throughout her entire life — she spent an hour donning herself with her nicely starched Pekalongan sarong and hand-made kebaya rather than putting on the modern, buttoned kebaya and ready-made sarong. She valued her hand-drawn sarong because the Javanese artisans were able to animate the motifs of birds and butterflies as if the nyonya attracted them. She beaded her own shoes to match her sarong kebaya. The importance of being a nyonya — both in appearance and way of life — did not become loose even after Bibik Swee Neo got married. She would continue to wake up at 5am, this time, to start preparing meals for her husband and her parents-in-law instead of learning to fix her appearance and honing her embroidery and cooking skills.

Bibik Swee Neo continued to honour her deceased parents through her excellent beading works and cooking skills, even when she hardly had any time for herself after giving birth to her son. Perhaps it was fear, or the need to prevent herself from becoming a disreputable matriarch in the community. It was not until when she reached the age of 60 that she reluctantly gave up beading as her eyes could no longer bear the strain of having to do the bead works at night. The European glass beads were too tiny to be seen by her and she did not want to end up like her close friend, Bibik Annie, who suffered from hemifacial spasm due to the over-stressed nerve around the eyes. Bibik Swee Neo certainly did not want to harm herself because she had yet to see her grandchild.

“Any news on your daughter-in-law?” Bibik Kim Neo asked while waiting for the food to be served at the wedding dinner of Bibik Annie’s youngest son.

“Macam sial, not at all. It has been two years since they got married and the stomach is still flat,” Bibik Swee Neo swore at the inability of her daughter-in-law to conceive and what bad luck she was.

“Oh mak lu! Did she go for a medical check-up?” Bibik Kim Neo adjusted her brown Pekalongan sarong that was specially bought for this wedding dinner.

“The doctor certified that they are both healthy. My son must be healthy because my food consists of so much spices! The cinnamon, turmeric, and lemon grass that are used in his favourite food — chicken rendang and beef curry — are all good herbs in maintaining the general well-being. But I have doubts about his Cina wife.” Bibik Swee Neo had no confidence in her Chinese daughter-in-law’s well-being.

Bibik Swee Neo was soon distracted by the laughter and noises coming from a group of youngsters. They were taking selfies, ‘groupfies’ and numerous pictures of their outfits against the stage, which was decorated with red lanterns and red cloths. Bibik Swee Neo glanced around them and quickly initiated a new topic with Bibik Kim Neo, who was busy chit-chatting with the other ladies over how ridiculously pricey a kebaya could cost nowadays compared to the 1960s and 70s.

“Kus semangat, I do not want to see any obscene scenes today,” Bibik Swee Neo was praying hard that her imagination did not materialise as the body of an ideal nyonya could only be seen by her husband.

“The embroideries of their kebaya look dead as well. Aiyooo, I would have thrown it into the dustbin if my daughters dare to wear such rubbish,” Bibik Kim Neo further pointed out that those kebaya were mass-produced and could never measure up to those hand-embroidered ones.

“This kind of button-up kebaya is so ugly to be worn. And look at the girl in pink kebaya biku. How can she match that with a choker and jeans?” Bibik Putih pointed at a young girl’s modern interpretation of kebaya as a jacket puzzled her.

“Macam anak sundal! My daughter-in-law wore such rubbish during Chinese New Year! Tak seronoh langsung!” Bibik Swee Neo could not stop herself from telling a piece of her mind over the unusual use of the sarong kebaya for the name of sarong kebaya was called such for a reason. 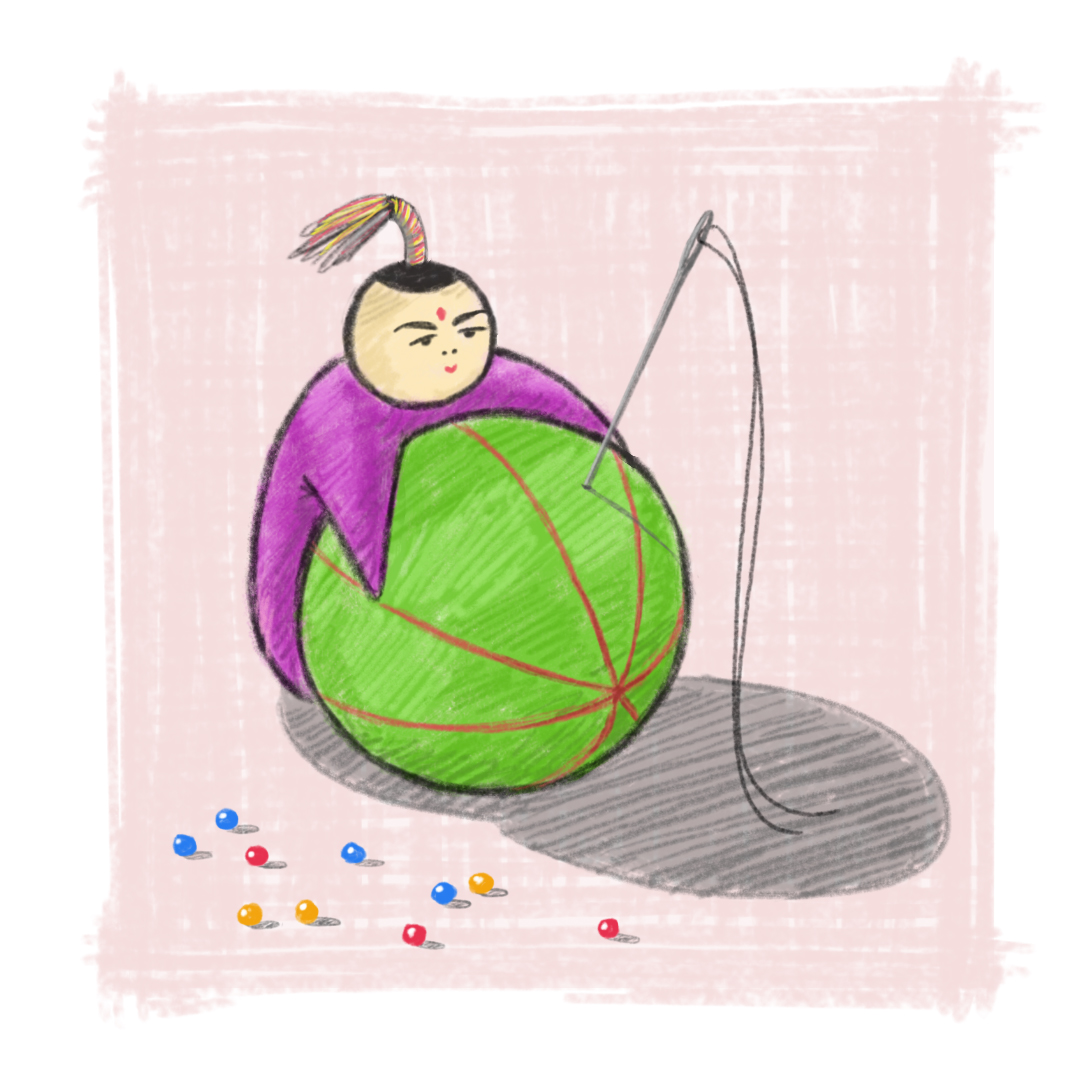 Looking at the youngsters, Bibik Swee Neo shook her head and thought about the time when mastering the colour coordination between the sarong and the kebaya was as essential as knowing how to fold the sarong and pinning the blouse with the kerongsang. The sarong should remain straight and the colour of the kebaya should complement with the sarong’s in creating a soothing and harmonious image to the wearer. A striking red kebaya with yellow sarong would never go out of style even though Bibik Swee Neo gradually preferred the muted colours such as the navy blue kebaya and maroon sarong that she wore now. The wedding gave her a good reason to display her gold rings, gold necklace and her hong buey earrings that earned its name from the shape of the phoenix’s tail. The idea was to look like a Christmas tree — colourful, flamboyant, and dangling with various ornaments. Pairing the kebaya with jeans was like a cowboy — nothing feminine. And what are women if one exudes no femininity!

“Let’s give a round of applause to the newlyweds, Ben and Christina, and their parents!” The emcee’s deep voice brought Bibik Swee Neo back from her deep thoughts. Amid the applause and chaos, she noticed the frail Bibik Annie trailing behind her son and daughter-in-law. Bibik Annie’s frail look reminded Bibik Swee Neo how vulnerable life could be and hence, she needed to make sure that her daughter-in-law gave birth to a son before she passes away.

Bibik Swee Neo consulted the famous fortune teller at Cheng Hoon Teng Temple since he was revered for his accurate predictions. After all, she had lost her patience after two years of disappointment. She needed to make sure that she left a good name — a responsible matriarch — when she exhales her last breath one day.

“Give me your name and your birthdate,” the fortune teller was ready to pen down on a pink paper.

“Khoo Swee Neo. I was born in 15 November 1941 at 5.05pm,” Bibik Swee Neo replied softly as it was taboo for others to know about one’s birthdate. They believed one could use it for black magic if someone managed to collect your hair and nails as well.

“The Year of the Snake. So, what’s the name and the birthdate of your daughter-in-law?”

“She was born in the Year of the Pig and you are a Snake. Snake and Pig are naturally not compatible. And you were born at the time of You. So, you are blessed with wealth but you have difficult relationships with your family members. And your daughter-in-law is a Pig, so the strained relationship between you two is doubled,” the fortune teller flipped through his astrology book while jotting down the details in an illegible manner.

“What do you want to ask?” he looked at Bibik Swee Neo, who was dumbfounded by the allegations.

“May I know when my daughter-in-law will get pregnant?” Bibik Swee Neo held her handkerchief so strongly.

“Your zodiac sign dictates that you are a powerful one. You have great observational and analytical skills and you rarely show it. Your daughter-in-law was born with a friendly persona and she is good at socialising. You will think that her personality is childish and for her, she thinks that you are incomprehensible. What’s your son’s zodiac?”

“He was born in the Year of the Tiger,”

“There you go. Snake is in opposition with both Tiger and Pig. It is fate. Your daughter-in-law will give birth one day, but only in your absence.”

“You will be born as a human again in your next life. But just one advice: Be kind to all earthly life. Kindness can change your destiny,” the fortune teller said, adding that Bibik Swee Neo’s previous life was a butcher and she had to repay her sins in this life.

“And your absence will be replaced by the birth of your grandchild.”

“And she has a mole at the right cheek just like mother’s. Mother would be thrilled to know because she said the mole at the cheek brought luck. Oh no no no, stop crying you little baby,” Jimmy, Bibik Swee Neo’s son, said.

Peter Soh has a love-hate relationship with his Peranakan identity ever since the television drama The Little Nyonya popularises the forgotten Peranakan community. While he takes pride in his hybrid identity, he hates it whenever he is asked by the “Peranakan enthusiast” about how many pieces of antiques he has at home. He has written his annoyance through stories such as A Man’s Kebaya and Being a Peranakan and the stories are featured online in Malaysia and Singapore. The Curse of Bibik Swee Neo is his third Peranakan short story.

Meghan Ang is an animation graduate from Emily Carr University. She often incorporates motifs of nature and the home in her work, and draws much artistic and thematic inspiration from her ethnic heritage. ➤ behance.net/muu-muu / @__muumuu__