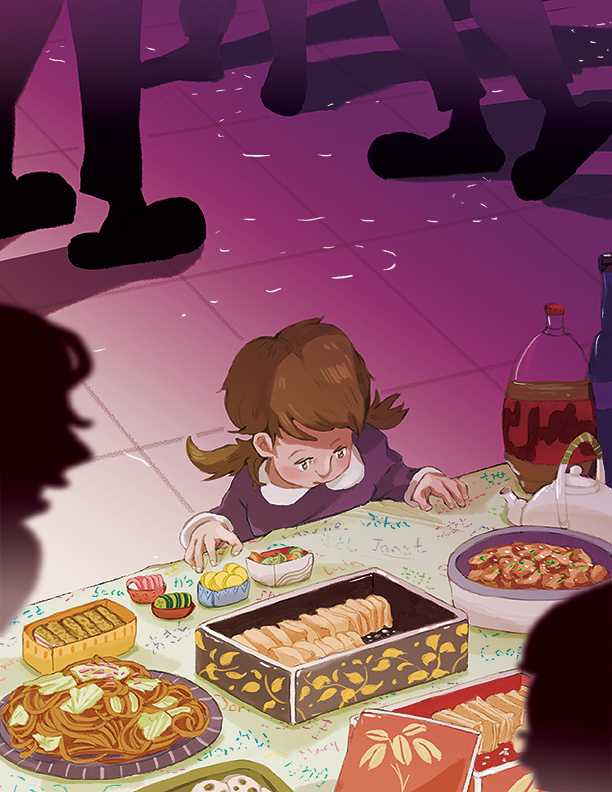 It was the winter I turned ten. The Japanese New Year fell in early January and was the occasion for our annual family reunion. That day, the tidy red-bricked home held a mix of non-English speaking Japanese and non-Japanese speaking English and the honey-tinted children of their unions, lending the hushed place new life with scrambling, laughing and screaming.

As guests arrived, the usual segregation emerged. In the living room sat Great-grandma, the matriarch, a small yet ponderous Fuji of folds and flesh surrounded by Great-aunties and uncles who nodded and smiled kindly but spoke only their native tongue. In the dining room sat the gaijin like my father and the sundry Caucasian relations, always convivial, Sapporo beer in hand. Grandma efficiently floated between the two worlds while we, a clutch of hyperactive children who had been in the car too long, left no corner of her home untouched. We loved its steep narrow staircase, velvety patterned wallpaper, and secret doors.

I was the sole girl in the group of cousins and mock WWF wrestling was low on my list of interests. I couldn’t wait for Auntie Yoko to arrive. That meant, well, vocabulary quizzes. Though she and Mum were both teachers, they were polar opposites. Where Yoko loved to tell stories, deal biting one-liners and commandeer the karaoke machine, my mother was the one who asked the questions, laughed along and set the stage for the star. Mum wore fine woollen knits from Ports International in eggplant and teal. Yoko’s bold, floor length, gold lamé skirt of one holiday season suggested her basking in a pool of gentle flames. Mum was sensible; she would calmly listen to a problem, assess the situation and deal with it deftly. It made her an excellent mum, but that day I was looking for entertainment.

“Let’s see how our prodigy performs today, shall we?”

Auntie Yoko spoke as if she was addressing an audience and not just me. It was one of her quirks, like the way she was averse to seriousness and answered questions with snippets of songs.

“Good try, though it’s just as well. The flame that burns twice as bright burns half as long.”

If she could look back from wherever she is now, I think she would appreciate the sad irony of her comment.

The pinnacle of the reunion was the food. As a sansei, or third generation Japanese, Mum rarely cooked the food of her cultural origins. She could master any North American confection or baked good on par with Julia Child, but she avoided raw fish and sushi rolls of any sort. So, this was our annual opportunity to gorge on the Eurasian cornucopia that the dining room table had become.

The lacquered trays of red, black, and gold bore seldom-tasted delights such as rows of what we called ‘bags’ but the adults called inari, seasoned tofu sacks filled with cool rice which we doused with o-shoyu and noisily consumed. Bowls of rice, peppered with sesame seeds, slivers of seaweed and shreds of carrot lay ready for our consumption. Smaller vessels scattered around the table would overflow with tsukemono; salted wilted cucumber slices, tart, dried purple eggplant and deep red pickled ginger. Yakisoba lay heaped in a steaming mountain which usually resulted in a battle over its last glistening noodles. We would hover, making our mental selections, snag a surreptitious sample, await the parental go-ahead to fill our Royal Chinet.

As usual, the kitchen was the busiest room in the house. Hide and Seek was in full swing and I knew I would be difficult to find among the procession of Great-aunties and distant cousins, their slippered feet snap-snapping as they padded in and out. An empty, though typically spotless dish cupboard lent the perfect place for me to crouch. I pulled my knees up and waited.

Soon, Mum came in followed by Auntie Yoko; I heard the sound of plastic wrap pulled back from a newly arrived dish. Their high-spirited tones and laughter had dropped to low, short comments.

“No, I’m not telling Charles anything.” Auntie Yoko sounded angry.

“Yoko, it was twenty years ago. He seems intent on meeting you and Charles is going to find out soon enough.” My mother was gentle, encouraging.

There was a long pause and I was afraid my thundering heartbeat would give me away. A guilty sound, the sound of a snoop. But soon their retreating snap-snaps were replaced by the pounding steps of smaller feet and with a yank of the door and a shriek of delight, my hiding spot was found.

There was a smattering of Western foods for the gaijin. Spare ribs, salted salmon and the infallible chicken teriyaki piled on raku platters carefully brought from kilns an ocean away. Bowls of white rice steamed beside a stack of chopsticks and a clattering of silver-plated forks for the less dexterous of us. Dad and Uncle Charles used to camp out on the dining chairs, observing the diminishing dishes and teasing us when we took more.

The dining room was painted a 70s ochre and the walls were lined with shelves dotted with kokeshi, those tiny, limbless, painted wooden dolls saved from childhoods before the war. The chairs were pulled away and set up around the house for the two encampments and the table carefully spread with a large, creamy cloth, the one reserved for these occasions. Each year we gathered, Mum would ask everyone to write their name on a portion of the cloth and then, when time permitted, she would carefully stitch over the letters with a different coloured thread. This living, evolving artifact would in time became a rainbow-hued commemoration of family gatherings and witness to those past and present.

And then there were the desserts. Exotic fare, foreign treats with fun shapes and textures. Sembai; we’d cram in handfuls of the tiny star, flower and oblong shaped crackers baked to crisp perfection in o-shoyu. Omochi; a dense, chewy patty of sweetened adzuki beans wrapped in a sticky sheet of beaten rice. And for those with less adventurous palettes lay the ubiquitous jello mould suspending bits of peach and pineapple, the officially designated gaijin dessert of the 1970s.

As empty dishes were packed for home and last hugs squeezed to those we would see a year hence, Mum set to spraying the stains soaking the stitched table cloth. I think back on that tablecloth because one name is missing. A name that should have been there, legible and acknowledged in coloured thread alongside the others, twenty years ago that day.

Shawne MacIntyre is a writer of Japanese and Scottish descent, living in Vancouver. She has spent the last 15 years as a fine art appraiser but has since come to her senses and is working on a series of historical fictions for tweens.