“Well, when we do nice things, we should do them without expecting anything in return,” said Auntie Guan, looking at me with her kind eyes.

I was sixteen years old, skinny and awkward, with large wire frame glasses that would always slip down my small nose. In the Toronto suburb where I lived almost all my life, I’d just joined one of the big public schools after twelve years of attending a much smaller private institution. The brown-bricked, almost windowless building contained long hallways lined with yellow metal lockers, illuminated by fluorescent lighting. The sound of Cantonese filled the school, due to the many students also of Chinese backgrounds from Hong Kong, many of whom, with their worldly ways and flashy clothing, seemed more like adults to me. Faced with all the unknowns, I hid behind the dirty lenses of those oversized glasses and t-shirts. A skinny, shapeless kid clutching her plastic binder and textbooks as if they could shield her from a world where it was not yet cool to be a geek.

Back in the house-which-never-felt-like-home, I was sitting with Auntie Guan at the round marble table in the kitchen with peach walls. Our conversation was punctuated by the sound of Karel, the green Amazon parrot, climbing around his golden metallic cage with his leathery grey claws. A tiny, feathered Sisyphus going round and round, occasionally squawking to draw attention to his fate. It was just one of the many after-dinner talks that we would have at that table over the years.

Originally from Guangzhou, China, Auntie Guan had come to live with us when I was in high school and was the same age as my dad—the same age my mother would have been if she was still alive. During the week, this optimistic, patient lady with her round face, large eyes and short black hair would do the cooking and cleaning in her pastel tracksuit-like outfits made of thin cotton jersey. On the weekends, she would go downtown to live with her son, who was just a few years older than I and looked very much like her. She had left her friends and the rest of her family behind, hoping to make a better life for him in Canada.

While I walked around in a dissociative daze, blanketed by a feeling of powerlessness, Auntie Guan observed household politics around her with keen eyes. She illuminated things that I could not see as a teenager with her critical thinking skills snuffed out by an abusive, neglectful childhood.

“Don’t talk like that to your dad,” she once whispered in the kitchen. “He doesn’t care how you talk to your stepmother, but he doesn’t like it when you talk to him like that.”

She was a much-needed beacon of warmth and safety in a house that was like the haunted house at Niagara Falls—sometimes scary, but mainly just plain cold. The adults who were supposed to care—largely absent and absorbed in their own lives—couldn’t care less.

“What kind of sweaters do you like? What colours do you like?” she asked after noticing that I always seemed to be wearing the same clothing to school: the oversized dark-blue sweatshirt and the loose, faded pair of black jeans. I must have said “I like orange,” because soon after, she began knitting me a sweater with a happy, orange-coloured yarn that she had bought herself. I don’t remember ever wearing the sweater¬—bright colours were for confident kids, while people like me blended in with the darkness. And some time later, a latch hook picture of Donald Duck I made somehow transformed into a big, fluffy pillow, with pink-and-white checkered cloth backing.

The adults who were supposed to care—largely absent and absorbed in their own lives—couldn’t care less.

Years later in 2016, I would visit Auntie Guan in Guangzhou for the first time. With my eight-year-old son and a friend of Auntie Guan’s, we walked around the ancient city, the historic capital of Guangdong province, its streets lined with old banyan trees and their long, dark aerial roots hanging from their branches like the beards of wise, old sages.

“Auntie Guan, remember when I was scared of ghosts, and you told me about the Chinese saying, ‘He who does not wrong others does not fear the knock in the night?’”

She chuckled because I’d gotten some of the words wrong, showing that familiar benevolent smile. Skin can wrinkle, hair can thin, but a kind heart always shines brightly.

“You really taught me a lot, Auntie Guan,” I said, to which she said something like, “Not at all.” Deep inside, we both understood how much she had shared with me.

After visiting a famous Buddhist temple with around two thousand years of history, we stopped at a warmly-lit vegetarian restaurant just down the street. The smoke from the temple’s joss sticks followed us into the restaurant, which was filled with wooden furniture and some Chinese Buddhist decorations. While sharing the food—meatless versions of savoury, aromatic Cantonese dishes¬—we revisited my dysfunctional childhood, with all the characters and drama, in that house-which-never-felt-like-home.

“Nobody else would understand what was really going on,” Auntie Guan said, after we had put down our dark wooden chopsticks. “But Auntie Guan lived with you and understands what went on, what you went through.”
Afterwards, we wandered around some side streets, buying miniature incense coils and bracelets made of large tiger eye beads, polished smooth and shiny like marbles. We also stopped by a little outdoor stall with waist-high stalks of sugar cane sticking out of a plastic garbage can—meanwhile, like the orange sweater, the bottle of dark green sugar cane juice we ordered for my son remained untouched. We then stumbled into a store where I tried on a light purple, cotton cheungsam.

“Wah, your mom looks like a Miss Hong Kong,” said Auntie Guan’s friend to my son. Auntie Guan smiled on the side.

“You’re too hakhei,” I said. “I’m already thirty-something.” I could sense how proud Auntie Guan was, proud that the ugly caterpillar she had once known—the one living in a small, colourless world, hiding behind dirty spectacles—had transformed into a butterfly, flying around the world, painting her life in bright colours.
Soon after, my son and I had to board the train at the bustling Guangzhou East station for Hong Kong. “Auntie Guan, let’s do this again next time, when you are visiting people in Guangzhou, and we are visiting people in Hong Kong,” I said before entering the crowded passengers-only area. There was plenty more to see in this city, full of the history of us Cantonese people, people scattered all over the world since the nineteenth century. A city Auntie Guan had told me so much about when I was a teenager when she shared her life with me, a life full of ups and downs like the rolling hills of Switzerland, memories that included the Cultural Revolution and the opening up of China.

“Yes, yes,” she said, nodding and smiling in her gentle way. “We could also go to Foshan or meet in Hong Kong,” I said.

While sharing the food—meatless versions of savoury, aromatic Cantonese dishes¬—we revisited my dysfunctional childhood, with all the characters and drama, in that house-which-never-felt-like-home.

In June just over two years later, I am sitting at a different table, the solid oak dining table of my flat in Switzerland. The minimalistic mood of the typical Swiss white-stucco walls and unfinished white ash flooring is offset by piles of papers, books, magazines, and the dirty dinner dishes sitting in front of me. I haven’t sent Auntie Guan a WeChat message since Chinese New Year, when my messages seemed to have gotten lost in the horde of forwarded greetings. I scroll through the “Favourites” album in my smooth Samsung, looking for a photo without any funny faces from my son or bad poses from me—filters can only do so much. I decide against choosing an “usie” I’d recently taken at a classical music concert. That could’ve been taken anywhere! Find something Swiss-y!

Instead, I choose another ”usie,“ one taken later that evening with the colourfully-lit Culture and Convention Center of Lucerne in the background, along with a near-perfect reflection of it on the black mirror of Lake Lucerne.

While I sit on my king-sized bed the next evening, I receive a notification from WeChat. Wearing my red-and-white striped pajamas, I swipe and unlock my smartphone. One last message before going to sleep.

“Hello, Angie. This is Auntie Guan’s son,” the first message reads. “I’d like to thank you for the care and friendship you’ve shown my mother.”

“I’d like to inform you that my mother passed in the hospital on June x, from cancer,” the second message says.

The third message contains a link to her page on the Mount Pleasant Group’s website. I click on the link, and a screen opens with a picture of Auntie Guan, wearing a red jacket and her signature smile. Below the picture are the details of her funeral. She is going to be buried at York Cemetery, the same place where my mother was buried more than thirty years ago. 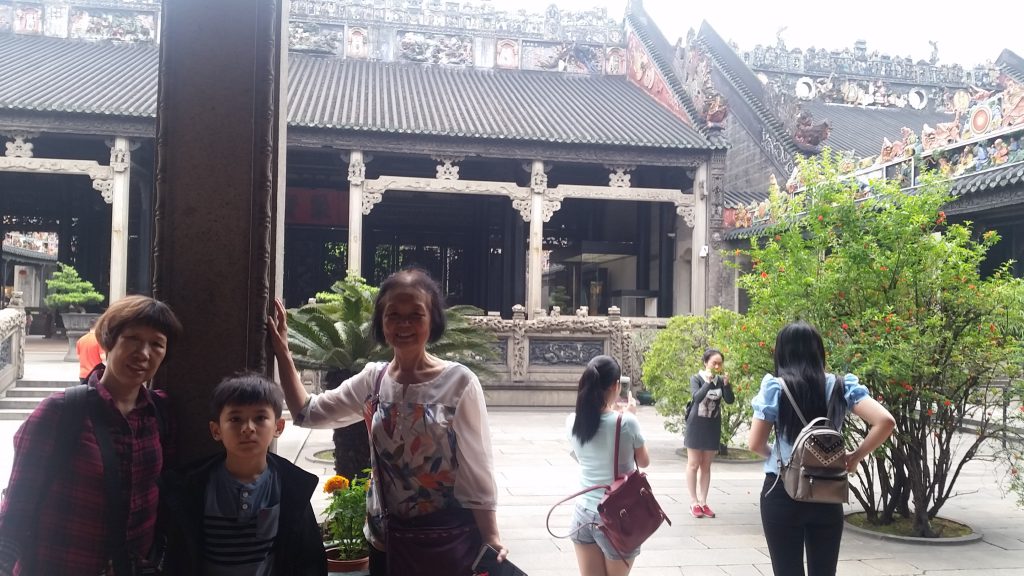 Angie Ng is a Chinese-Canadian feminist writer and activist with a Hong Kong Chinese background. Born and raised in the Greater Toronto Area, she left Canada after studying at the University of Toronto and has since lived in many different cities. She has a PhD from Durham University in the United Kingdom and appeared on BBC’s 100 Women list 2017, as the founder of SlutWalk Hong Kong. She is currently based mainly in Switzerland.