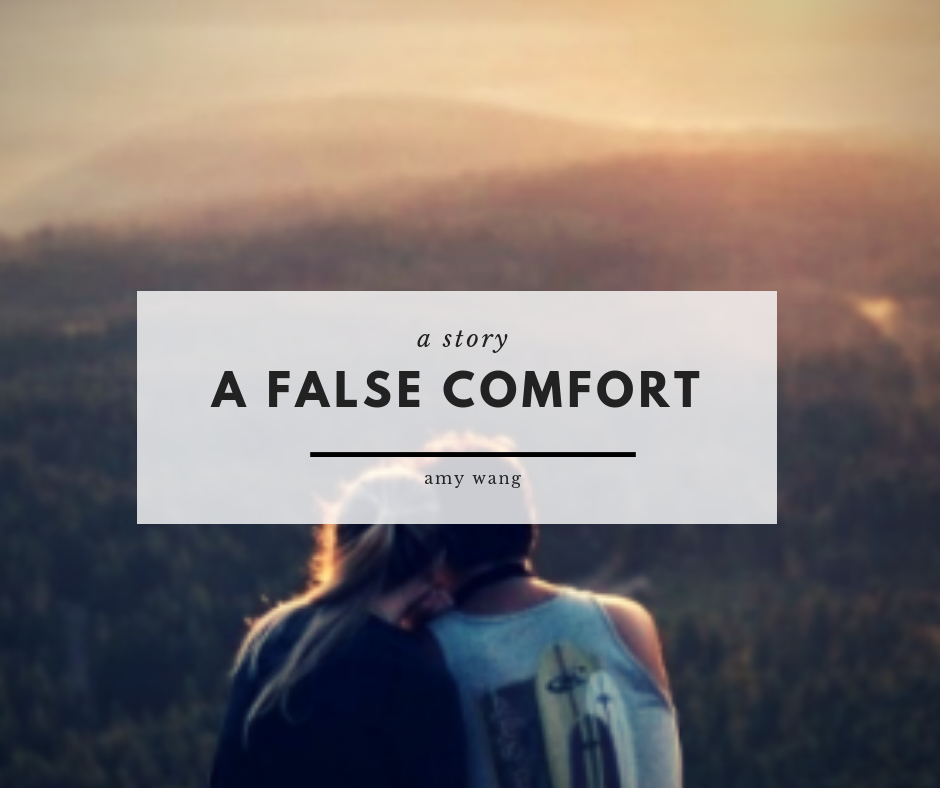 A year before I leave him for the last time, we take a trip together. Rachel is three, and we drive down to Maine in the summertime. By this time, I feel as though I am sleep-walking through the most important moments of my life, willfully dulling the bad memories in such a way that affects my ability to recall the good: Rachel’s first steps; her unrelenting and charming babble-turned-chatter; the night Matthieu and I decide to conceive again. The ocean air awakens me from my long mental slumber; as soon as I am confronted by the vast, unending blue before me, I only want to submerge myself.

I spend an hour on my own—time is a precious commodity with a young child—bobbing up and down in the water, covered in goosebumps. When the clouds roll in, the fog obscures the horizon, so that I am no longer able to distinguish water from sky; there is only grey surrounding me. Teeth chattering and hands wrapped across opposite shoulders to retain some measure of warmth, I make a commitment to myself to stop running. I will return to the hotel, I tell myself, give Rachel a kiss, and make a plan.

Far in the distance I hear someone calling out my name.

By this time, I feel as though I am sleep-walking through the most important moments of my life, willfully dulling the bad memories in such a way that affects my ability to recall the good.

My mother died two days before my 30th birthday, quick and quiet at the brush of midnight. An hour prior to her death, my mother’s last words to me had been “you’ll need to lose weight if you want to find a husband.” She needn’t have worried, for over the course of the next three seasons I lost 25 pounds, revealing new planes on my face that made me look at once sparser and more substantial.

It was during this period of mourning that I met Matthieu. Tall, bearded and Quebecois—the type of man my mother would have frowned upon. “Not Chinese,” she would have said in a huff the moment Matthieu left the room. Even worse—Matthieu was a bassist for a jazz band, working as a barista during the day for the same grimy coffee shop-cum-bar that commissioned him for cheap entertainment in the evenings.

Matthieu wasn’t much of a singer, but his friend Nina was. When they performed, I found my eyes drifting towards her more often than they did for Matthieu. Despite her Kansan, churchgoing background, there was something feral about her when she opened her mouth wide to sing.

One night, I requested a song for her to sing.

“You know it’s like … the most heavy song ever, right?”

She studied me. “Alright. I’ll play it second to last.”

And so she did, cuing only the pianist with a whisper after a successful and forgettable cover of “Ticket to Ride.” The audience, dwindling to moony couples and cracked-out businessmen, was restless, whispering among themselves as an asynchronous collective. Love was the only topic they had come to hear songs about: its absence, consequences, and disappointments, and then again, its endlessly-propagating rewards, all id and no ego, and the last thing anyone wanted to be reminded of was the kind of pain that didn’t manifest itself in navel-gazing melancholy.

But Nina, she had arrived somewhere. Her voice had weight to it; it travelled. The lyrics were inextricable from their history but this time, crucially, it was Nina’s melody, freely improvised, that arrested me in full force. I sat transfixed, refusing to look over at Matthieu, who I knew had been stealing furtive glances at me all night.

It was during her post-show glory that Nina liked to divulge all her secrets.

“You know,” she said, “Matthieu was never this peaceful when he was with me.”

“What? When were you guys together?”

“Many years before, don’t worry.” I was worried that she felt the need to tell me not to worry. “It was when we were still in school. It didn’t last—obviously. We weren’t right for each other.”

My mind spun with questions, but I asked the only one that mattered at the time. “How did it end?”

“I don’t know, we just sort of broke it off,” she said. “I mean, he was going through a tough time, Matthieu was. Less well-adjusted.”

She blew a line of smoke, tilting her face away from me. “Leanne, don’t worry so much. I’m telling you this to make a point. He’s happier now than he’s ever been, and I’ve seen him go through his fair share of women. The good thing about you is that you’re relatively sane.”

I laughed, despite being uncomfortable with the characterization. “Yeah, we’ll see about that.”

Love was the only topic they had come to hear songs about: its absence, consequences, and disappointments.

“T’es fou? Come back here, you crazy woman.” Matthieu’s voice tears me from my reverie. He’s at the shoreline now, holding Rachel to his chest with one hand, waving at me with the other. I am far enough from him that I can pretend he is here for someone else: another woman who isn’t plotting her escape, who would stay to make it work. Time suspends itself in the water, and for a few moments I consider what it would feel like to drown. Matthieu would have to set Rachel down and retrieve my body from the undertow, swimming until he reaches an approximation of where he saw me last. He would tire from treading water, angry waves crashing overhead, salt burning his eyes and still he would try to call out for me.

And I, meanwhile, with brine in my lungs, would be submerged down below. Gulping water; larynx spasming; my trachea engorged. Anoxia, as I know it best—I am a lab biologist by trade and know very well the effects of oxygen deprivation on mice—within 30 seconds I would be brain dead. In the aftermath of Matthieu’s outbursts, usually in the violet hour between dusk and dawn, I dream about dying. Death by overdose, death by accidental blunt force trauma, but none more poignant and vivid than drowning; at some point, there has to be a moment of stunning clarity just before the precipice; the last, worthless gulp before the lungs flood with water.

Would he swim out for me?

Or would he simply watch as I disappeared?

A strange thing about Matthieu, or perhaps not so very strange at all: he is always protective of Rachel even as he allows himself to hurt me. It is perverse but almost touching, and this alone, I suspect, is what still binds me to him.

Most nights at home during my pregnancy, I would lie prone on the couch, Matthieu’s hands on my stomach as he embraced me from behind. We liked to watch and re-watch scenes from Lost in Translation, and I would laugh when Matthieu made atrocious impressions in a thick French accent.

“You’re ridiculous,” I would say, and laugh despite myself.

“You are.” I remember turning towards him, managing only a half-hearted adjustment on the couch, belly up like a half moon. “You should stop before I laugh Rachel out of me.”

“Is she kicking now?” He asked, sitting up. “Do you think it’s ok for us to laugh this much?”

“Yes, of course. Do you want our daughter to grow up without a sense of humour?”

“Well, if she isn’t funny then she’s not a true Fournier. I’m just making sure everything is okay avec mes femmes.”

No longer a woman or his woman; I was one of two, never again an island unto myself. When he asked if I was hungry, he was asking after us both; even when he made love to me, I felt as though we were three bodies moving in tandem, Matthieu so pre-occupied with not hurting Rachel that I once complained I couldn’t feel him at all.

“You bitch,” he whispered, as though speaking softly would dull the blade of his words. “Don’t say that to me again.”

And then, as ever, when I was left crying, he would return with an apology. No pause between I love you and I’m sorry; the two have become synonymous in my mind.

Anoxia, as I know it best—I am a lab biologist by trade and know very well the effects of oxygen deprivation on mice—within 30 seconds I would be brain dead.

Shivering now, I take one large breath, diving face-first into the white-crested waves, and head back towards the shore.

Not knowing which version of Matthieu to expect, I ready myself for his worst. But he only takes off his sweater and hands it to me, retreating to our room with Rachel in his arms. I look back towards the water, wanting to memorize its greatness, and am reminded of the first time I was this close to the ocean. I was fourteen, in the Bahamas with my parents on a similarly overcast day. In a petulant mood, I camped out on a lounge chair with our belongings, fully clothed and an outlier among tourists trying to make the most of the day.

My mother, after lathering herself in sunscreen, was finally convinced by my father to tiptoe into the water. I turned to read the book I had brought with me and was quickly lulled to sleep. When I woke, bleary-eyed and dazed, I tried searching for my parents, but only white beach chairs were around me, left behind like skeletons on the sand. I began to walk towards the water, finally spying them in the distance, farther than I would have ever imagined the two of them venturing out.

Ba! Ma! I called out, but there was no way they could have heard me. So I just stood there, watching my mother, who had never learned how to swim, attempt to kick and splash in the ocean in my father’s thin arms, looking happier than I had ever seen her. I couldn’t have known then that in another two years, my mother would file for divorce, citing irreconcilable differences, and that my father would make a shadow attempt at creating another family before his new wife left him too. I thought myself invincible and felt certain that I would find something better than the shoddily constructed relationship my parents seemed to have, feeling outrage when my mother, after years of heartbreak, still took my father back in, seeking false comfort in something she already knew to be broken.

Amy Wang is a Chinese/Korean-Canadian writer based in Toronto.