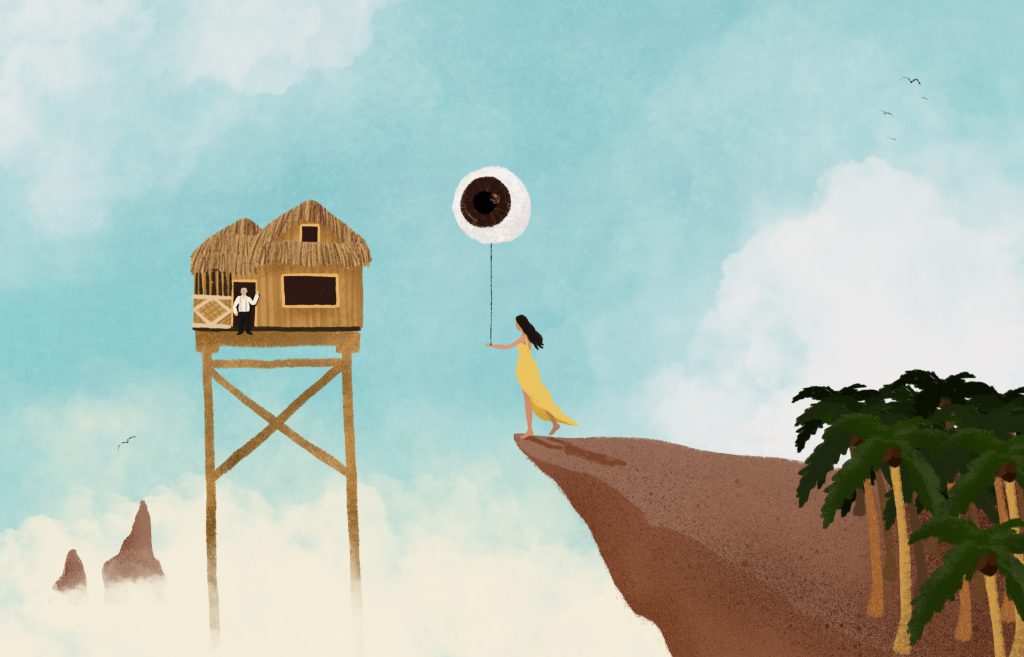 The death of Benjamin occurred curtly past the midnight of November eleventh. Twelve years, a short amount for those of his kind has lasted longer than the love of the young marriages told about in the stories by my grandmother. The inevitable graying, she used to say, once a thing like this happens to you, unfolds in moderation, but does not fail in succession.

First, the wood of the tocador[1]  will lose its sensuous concentricity. The kamagong[2] will soon look more like a yakal, made dull, lacklustre, cheapened. Once dense, it will turn hollow; a knock on its side will reverberate a distant echo in approximately the key of B minor. The smooth, unfinished walls of cement, my grandma iterates, already gray, will gradually turn into a shade of domestic eggshell. The floors, despite any effort with a walis tambo[3], or any dusting with an old shirt by way of jerking the foot back and forth in a wiping motion, will gather more dust than was ever possible for an enclosed space. You will sneeze at once, you will sneeze again, and you will sneeze infinitely. The space, she adds, in fact, will cease to be enclosed; windows of capiz, once emanating a gentle eerie light with its tiny frames of mollusk, will at once fall off its hinges, shattering on the ground below as if they were never connected in the first place.

Just as she had described, upon Benjamin’s death, it all happened. In the beginning, it wasn’t so terrible. The cavernous drawers were altogether manageable; and although the walls had an air of malaise, it was really the taste of nausea that was the bother. The floors, at first merely gathering dust, in time were swarmed with long strands of hairs, too. In trying to walk too quickly, a bundle of strands would trip me over; and yet the pain of falling was none compared to the feeling of ticklish tresses between the gaps of my toes.

In an attempt to combat the cold, I plastered large posters on the wall. Darlings and idols, amassed over the years, have finally come to some sort of use. Except nearly every evening, a strong gust of wind would blow a hole straight through them as if a ghost. Thereby, at once, I came upon the idea of manufacturing a Frankenstein plug to fill the break in gluing together: an anthology of Spanish poetry, Blood on the Tracks, a Björksnäs bed frame, some heavy blankets, socks with avocado print on them, and a number of articles collected in a trip to Europe about four years ago.

I would be lying if I said that I didn’t try to revert Benjamin’s death. I heard once that you could fashion a real, working heart, by putting together an unopened can of liver spread, processed cheese, some fried galunggong[4], all soldered together with bits of bronze. Careless that I was, I forgot the part about it needing to be consecrated. Consequently, and though it was in vain, I remembered that I had lost the phone number of my pastor anyway (it was useless, of course, to ask a stranger to bless your makeshift heart).

Then, I remembered the uncle of my grandfather, who was said to be a babaylan[5]. I imagined him, as my father had once told me, whispering mysticisms to the foreign occupiers in the jungles of Luzon rendering him invisible to their eyes and ready to strike. (If a tree falls quietly in the forest, maybe it was never there). Or how, in demonstrating the grit of the spirits residing in his body, he would bite the head of beer bottles with his bare teeth, ingesting the shards of glass with a gulp. (I am, therefore I bite). And so, with these in mind, I called for his magick. In a silent appeal for nearly a day and a half, I prayed to the ancestors of my ancestors.

It was, however, to no avail. So I made up my mind that, perhaps through time; due to an insincere intention or a pure lack of faith, the magic of the ones who gave me my name, in fact, perchance, had an unprecedented date of expiration, which my father had swept in the emotions of his recounts to me, forgotten to disclose.

Still, in feverish hope to revive my only and beloved Benjamin, following a number of other futile shortcuts and tactics, I had finally decided to consult an expert on the matter. Upon a lengthy discussion of options (of animation, which was a no, on his part; of modifications, which also resulted in a resounding no, on my part; and naturally, I refused to submit Benjamin to any kind of freezing or skin-mounting), we eventually came to an agreement on an affordable and yet luxurious Memory Foam™.  As I do anticipate, the temporary depression upon any kind of petting will inevitably deform the look of Benjamin. A crater upon his visage is certainly not ideal in conveying his resurrection. The incremental return to its original state, however, following the slightest bit of pressure, shall have the effect of Benjamin responding as if in vital motion (an advantageous feature).

Admittedly, when I was told that it would be difficult to hide the scars of the incision, I could not hide my dismay. I did not, by the slightest means, want to be reminded of his cadaverous state. I knew that my wishes, however dire, were idealistic- quixotic even.

As such, the expert offered me a kind of compromise: if I truly wanted this illusion to be grounded in reality, I must then commit the ultimate sacrifice of renouncing the privilege of having both of my two eyes. Through the surrendering of one eye, one measly eye, for the benefit of Benjamin, I would then be rewarded in two ways.

The first is that, in seeing through only one eye, the left eye, my perspective would be entirely skewed in a sense that I will no longer be able to, so much as I try, notice the scars of the incision. No matter which angle I attempted as a point of vantage, I shall not see it; it will not be there. The second is that, in donating my other eye, the right eye, to take the place of Benjamin’s right eye, I shall have the rare and gratuitous honour of seeing the world as it appears from the perspective of Benjamin. Dubious, I know. I was also curious about how this would unfold.

Nonetheless, I had consented to the operation before the expert could enclose to me as to how exactly it would transpire. What can I say, when the serpent gives you fruit, what else are you to do but to extract that fruit dry?

As you are reading this, I can only imagine that you are anticipating the results of my decision. I shall make no further delay in telling you. This double vision, a kind of simulated mirror of the world, as an effect of having each eye in two separate locations, has been miraculous and has entirely transformed the procession of my life. I have become the cinematographer of my own perception; a kind of ad hoc Creator. At any given point, I can choose to close my right eye and view an event from the West, or close my left eye and view it from the East, or see through them both in concurrent discord (which, I have to say, produces a refraction of lights, colours, and shadows, a show most pleasing to the senses). The mode of having such a malleable vision is quintessentially surreal- the possibilities of which are incalculable. Its application in any sort of activity involving the visual is manifold; its resources, inexhaustible until I perish (and I have Benjamin’s immortality, now, to thank as well).

My preoccupation in testing the limits of this newfound ability has, as an understatement, served well to pass the time. Things do not quite appear the way they used to. They are the same, and yet different, but in the good sense of the word. The Graying is still there, though somehow, the double vision makes it appear less dismal, and more ephemeral. If I shut one of my eyes, I could fully neglect half the room.

Best of all, not only have I encased Benjamin into an ultimate and solidifying permanence, (and lately, I have also been considering my very own transition) but I have also acquired this cutting-edge vision: effervescent, imprecise, absolute to which, not even the latest model of a mirrorless Canon camera can compare to.

[3] A broom native to the Philippines made of soft reed

[4] Tropical fish in the Indo-Pacific region

Lyn Medina is Philippine-born and currently working in the Simon Fraser University (SFU) World Literature department. Her work aims to connect a culturally rich pre-colonial past to a disenfranchised present in a manner that attempts to be both sensitive and light-hearted. In order to pay the rent, she might also be found in an open-kitchen restaurant someplace, cooking eggs and acquiring third-degree burns.

I’m so proud of you Lyn Medina ❤️😘