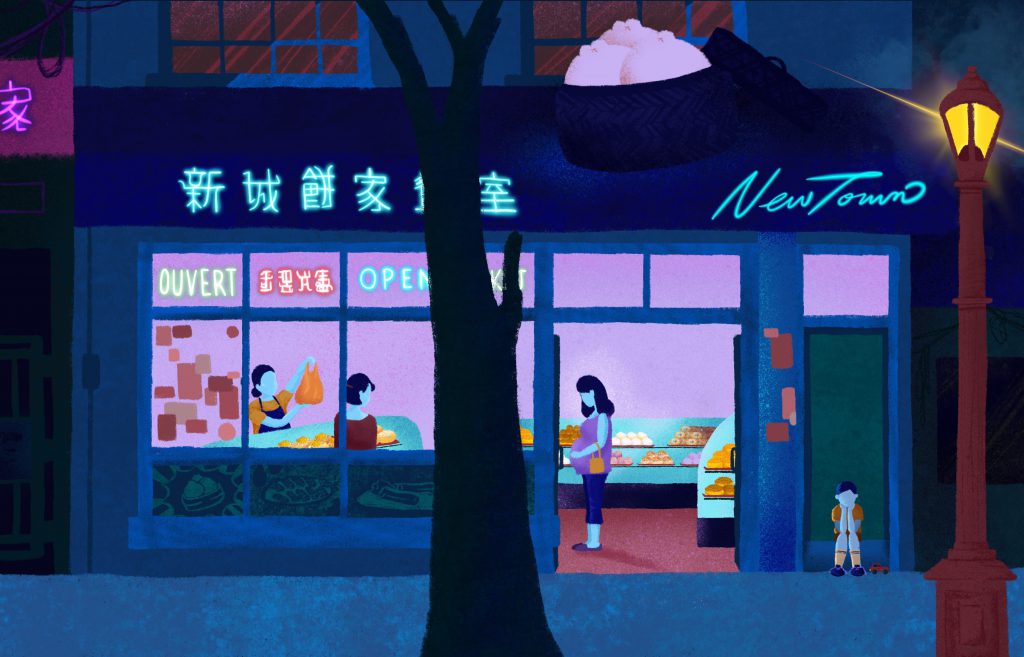 Tala was pregnant, but then she was not. Three times this happened. The first time she was pregnant, she was two days late, and peed on a stick. The first vertical line appeared and then a second. There were no reasons not to share the news; Tala hadn’t thought of miscarriages or defects. She told her husband, Angelo, and they posted the news on their social media. Those they knew who still used phones to talk, they called. This included Nanay, Tala’s mother, who still lived in Tondo. Nanay received dialysis three times a week and didn’t qualify for a Canadian visa.

Tala heard many warnings from her mother—no shellfish, finish all the food on her plate, avoid looking at unpleasant things—so the baby wouldn’t be born early or ugly. But Tala had an uneventful and easy pregnancy, and her water broke at 39 weeks. A few hours later, Christian was born and Tala wasn’t pregnant anymore.

Three years later, Tala was three days late. This time, a positive sign appeared on the test to confirm she was pregnant for the second time. But vertical line was faint, so she dragged Christian with her to her doctor. Dr. Guerrero made Tala take another pregnancy test. In the clinic bathroom she struggled to keep Christian from touching anything while she peed in a container. Her urine was a cheerful yellow and she covered it with a jaunty orange cap.

In the examination room the doctor told Tala her pregnancy test was negative.

“I don’t understand. The test was positive this morning.”

“It’s negative now,” Dr. Guerrero repeated. “It sounds like you had a chemical pregnancy. I’ll write a req for a blood test to confirm the negative urine test.”

“Okay,” Tala said, and thought, I was pregnant with chemicals?

The doctor left the room and Tala felt a wetness between her legs. She returned to the bathroom and found she was bleeding. Heavily. She ripped toilet paper off the roll and shoved it into her underwear as she scolded Christian for playing with the door handle. Tala didn’t need a blood test to confirm she wasn’t pregnant anymore.

On the way home, Christian asked for a happy meal. Tala went to the drive thru at McDonald’s and ordered.

“Boy or girl?” the speaker asked.

Tala was horrified. “I-I-I don’t know. I was only four weeks.”

The speaker cackled with background noise, then a voice asked, “For the happy meal toy. Boy or girl?”

On the phone that night, Nanay asked Tala if she had eaten prawns.

Tala couldn’t believe her mother thought something Tala ate could have caused a miscarriage.

Nanay continued in Tala’s silence. “Ay nako! I told you no slippery foods! The baby will slide right out! Next time no prawns, no shrimp—are you drinking coffee? Remember caffeine is bad too! Are you getting enough rest? You’re always go-go-go.”

Tala ended the call and held the phone to her chest, giving it the hug she craved and wouldn’t get from her mother.

A year later, Tala was pregnant for the third time. She waited eight, nine, ten, eleven days past her expected period date until she finally went to the dollar store. Tala strolled down the aisles filled with colourful plastic—toys, gardening supplies, Tupperware—until she found the hygiene section. She bought two pregnancy tests.

With the first test, the second line was faint. She was suspicious this might be another chemical baby so Tala waited until the next morning to take another test. In the silence of the bathroom, the absence of a second line screamed at her.

In the living room, Christian and Angelo were watching a TV show. Tala told them she was going out. She’d been walking for half an hour before she was engulfed by a sweet-smelling cloud. She saw she was standing in front of the New Town Bakery and went inside. She wandered throughout the store looking at the different baked goods. Tala picked up a package of three oblong buns, golden and freckled with sesame seeds. She remembered how much she loved these as a child; they were her mother’s favourite too. In Tondo, they’d wake up early to go to the local bakery to buy coconut buns straight from the oven. Tala recalled the bliss on her mother’s face as she bit through the airy dough to get to the buttery coconut filling. Tala looked at the package in her hands and wondered if they would be any good.

The door tinkled and a pregnant woman came in. She grabbed a variety of pastries and Tala noticed the way the woman rubbed her belly as if to say, just you wait, all these goodies you’ll get to eat later. Tala saw many pregnant women—her sister, her friends, her neighbours, her colleagues—and they didn’t bother her. Looking at this woman, Tala wanted to punch her in the face. It might have been the way she stood as she dumped her selected treats on the counter, scratching the back of one leg with the other foot, looking like an elegant type of bird.

“I’m sorry. Cash only,” the cashier said, looking at the debit card the woman held out.

“There’s an ATM down the street.”

The woman sighed. “Okay. I’ll be back.” She brushed by Tala on her way out. “Sorry.”

Tala stared after her. You stupid bitch.  The thought both surprised and pleased Tala so much so that she whispered it aloud, “Stupid bitch.”

“Ma’am?” The cashier called out.

“Do you want to buy those?”

Tala looked down at the package in her hands. She hadn’t realized it, but she had squeezed it; the three coconut buns were flattened in her hands.

“Do you want to try this mamon? Just baked an hour ago.”

Tala stared at the open box the cashier held out. Inside were four plump circular cakes.

“No, thank you.” She walked up and placed the squashed package on the counter.  Tala looked at the coconut buns beside the pregnant woman’s pastries.

“The woman that was in here. Can I buy this for her?”

The cashier shrugged and rang up everything, her fingers gently tapping in the prices, as if she were to press the numbers too hard, they’d cry.

At home, Christian opened the New Town Bakery bag. “What are these?”

“Coconut buns. They were my favourite when I was your age.”

“Sure,” Tala said, and went into the kitchen. She grabbed three plates and placed them on the coffee table.

Christian laid a bun on each of the plates. “One for Mama, and one for Papa,” he said. “And one for me! Perfect!”

Melisa Gregorio is a writer whose work focuses on strong Filipina characters. She is the daughter of first generation immigrants: her Tatay is from Gapan, Nueva Ecija, Philippines, and her mother is from Whitehaven, England. Her parents met in Vancouver at a disco and married a year later. Melisa lives in Port Coquitlam with her husband, Brendan, and son, Malakai. In addition to being a writer, Melisa works as a master’s-prepared registered nurse whose areas of expertise includes nursing education and clinical informatics.

Katya Roxas was born and raised in the Philippines.  Katya is well-versed with the sacrifices and opportunities that come with being an immigrant. Through her experiences, she strives to break the barriers of cultural misrepresentation by creating honest and inclusive visual expressions.