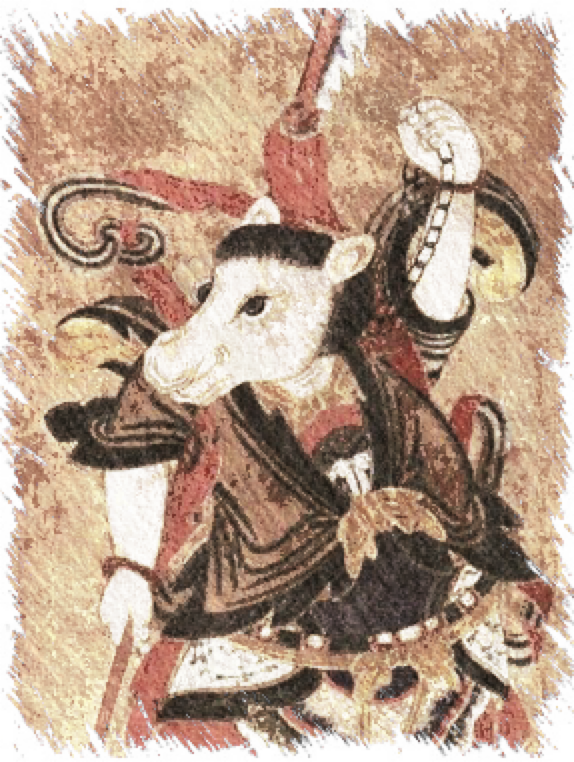 Author’s note: The dialogue in this story is written in colloquial Malaysian English (of the variety spoken in the Klang Valley). Malaysian English often eschews English grammar in favour of Chinese, Malay and Tamil grammatical structure. Verbs and nouns from the local languages are also commonly used.

They laughed the cackle of the hopeless under the moonlight which they did not notice. It paled next to the street lights which illuminated a signboard. The signboard read:

Mui clutched her stomach. A reflex from her time spent as a living person.

Ah Lim slapped the tarred road repeatedly with his palm.

Mui greeted it with two appreciative stomps of her right foot.

Ah Lim could not reciprocate as he had expected to wipe tears from his eyes.

The lull in their dance of despair gave Mui time to catch her non-existent breath.

Mui stood, hunched over in a floral samfu, on the lonely road that led to the cemetery. She hovered over Ah Lim who sat on the curb, upright, in short-sleeved white shirt and black slacks.

‘Sometimes, sit here. Sometimes, sit there. Over there, that side, also quite nice.’ He gestured to a lush green tree on the other side of the road with the tilt of his head.

‘Serious la. Want to go to hell also not so easy. You remember when I had to fill up the form to get my driving license?’

‘So, did you actually go there or not? Is this like that time you said you got go to work but you went to play mahjong?’ Mui asked, accusingly.

‘Please la. I got go. Look, I have the form.’ Ah Lim dug out a piece of paper from the left pocket of his slacks. The paper had been folded many times with uneven lines.

Mui sat down next to him to get a closer look. ‘Aiya, two columns only. So difficult meh?’

‘Wait wait. So you mean you went to hell and then left? How come they didn’t catch you?’

‘What ox-head. Where got people use English name wan,’ Mui said as she smacked her palm onto Ah Lim’s forehead.

‘Sshhh..’Ah Lim dodged out of the way from Mui’s palm and put a finger to his lips. ‘Don’t say it. They might hear you if you say the real name.’

‘You really yau mou kau chor. Where got such thing! You mean they don’t understand English?’

‘It’s been working for me. Thirty-five years. You want to try, you try la.’

‘Ok ok fine. Then how did you get this form?’ Mui said. She snatched the paper from Ah Lim’s hands.

‘Wait, this is your first night, is it?’

‘Ya, I just died yesterday. Finally. After lying in bed for two months at the hospital.’

‘Oh, then you still have six nights.’

‘Six nights for what?’

‘Six nights for Ox-head and Horse-face to catch you! They will visit you on the seventh night and bring you to…’ Ah Lim looked around nervously. ‘I think it should be okay if I say this in English, the Court of Hell. That’s where you get the form. After I got the form, I just slipped away when they were not looking.’

‘But gods have eyes everywhere what?’

‘Cheat people wan. Also, too many dead people. Long time to wait for your turn to get in. Just like getting driving license.’

‘Ok so,’ Mui said as she read the form. ‘The first column have to fill up your good deeds. Second column is bad deeds. Why are you taking thirty-five years to fill this up?’

‘I have been thinking. You know when I started a strike at the mill?’ Lim averted his gaze from Mui to stare at the tree across the road.

‘How can I forget? You didn’t tell me then suddenly say your boss hire samseng to kill you and made us run from Singapore to KL in the middle of the night. I was carrying five months old Ah Ying on that bus that keeps stopping at every bus stop in Johor.’[3]

‘You’re still mad at me,’ Ah Lim said, still not looking at Mui.

‘Of course, I am still mad at you!’ Mui shouted. ‘You stopped working when we left Singapore and I had to do everything! Now I am sitting here thinking of how to fill up your form.’

‘I know how to fill it up! I was going to put starting a strike in the good deeds column. And then I thought about it… That’s why it has been so difficult to fill up this form.’

‘Please la. You just wanted to feel like the big man.’

‘Oh? Blame me la now? If you like communists so much, should have stayed in Toishan.’

‘I was not a communist! I was a socialist!’ Lim insisted.

‘All I know is you were on the blacklist!’ Mui said. She gazed down at the piece of paper in her hands. ‘Like that la, put start a strike in good deeds and make samseng want to kill family in bad deeds.’

‘What about you? What are you going to put down as your good deed?’ Lim asked.

‘Oh easy. Number one, raise five children alone while husband say he is socialist not communist. Number two, work three jobs at the same time after husband make samseng want to kill us. Number three, steal fried rice from school canteen, wrap in many layers of newspaper and hide in dustbin behind school so Ah Ying can take it home when she finish work while -’

‘While husband got drunk,’ Ah Lim finished the sentence for her as he took the form back from her.

‘Put that under your bad deeds.’ Mui reached over and pointed her index finger at the column labelled ‘Bad Deeds’.

‘I know but I only drank so much because I couldn’t get work.’

‘You couldn’t get work because you drank so much.’

‘And because you hit me. With that broom. And then you swear at the children. Are you going to put that under your bad deeds?’

‘Scold a bit is not swearing at the children and I barely brushed you with the broom.’

‘Mui,’ Ah Lim said. He turned to look Mui straight in the eye. ‘You used to brush me off the bed with the broom and then hit me with it even after I got up. Then you will go to the crying children and yell at them to shut up. Then sometimes you will yell tiu lei lou mou even though you are their lou mou.’[5]

‘Is that why Ah Ying still hates me?’ Mui said.

‘Sei lor. We are not going to get into heaven, are we? First must go through each floor in hell. Eighteen floors, right? Then only can reincarnate.’[6]

‘Why do you think I sit here so long?’ Ah Lim said, a slight smugness in his voice.

‘So, your plan is sit here forever? They are going to come for me on the seventh night, like you said.’

‘I never got my citizenship. Did you?’

‘No. Tried three more times after you died.’

‘Three times? But you were born here!’

‘You know why la. I never found my birth cert.’

‘So, we have always been illegals. Running around sounds better than getting your tongue ripped out in that place where they punish you for gossiping. I got talk bad about you to Ah Kien. Many times.’ [7] Ah Lim looked at the ground.

‘Then there’s that place where you drown in a pool of blood. What’s that for ah?’

‘Not giving face to others. I think.’

‘Oh,’ Mui said. It was her turn to look at the ground. ‘You remember we used to go to Rex Cinema? Before Singapore and before I had Ah Ying.’

‘Ya, is the wantan mee stall still there? Still good?’

‘Don’t know but you know what, forget about this form. Let’s go try,’ Lim said.

Lim stood up, offered his hand to Mui and wriggled his eyebrows at Mui twice.

Mui took his hand, stood up and rolled her eyes at Lim once.

Lim waved the wrinkled form at Mui, inviting her to take it.

Mui accepted the invitation by grasping it from Lim’s hands.

They let it fall to the ground.

When the remnants of hellish bureaucracy landed on the tarred road, they both stomped their feet upon it, successively, repeatedly, until all of the past fires were extinguished.

[1] ‘Yau mou kau chor’ means are you kidding me? in Cantonese.

[2] Ox-head and Horse-face are guardians of the underworld in Chinese mythology.

[4] ‘Give face’ means to show respect to someone. A colloquial Malaysian English with origins in Cantonese.

[6] ‘Sei lor’ literally translates to ‘die’ but is closer to ‘damn it’ in this context.

[7] One of the 18 floors in hell is The Chamber of Tongue Ripping. It awaits those who like to gossip.

Booi Carlyn writes from the confluence of cultures that is Kuala Lumpur. She hopes to harness the chaotic energy of her wonderfully frustrating city to generate stories. Her short stories have been published in Shards and Touchstone Literary Magazine. She was nominated for the Best of the Net 2021.