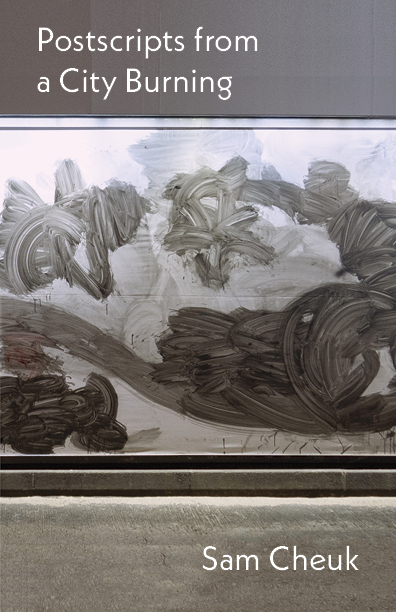 Postscripts from a City Burning

As authoritarianism spreads with Russia’s invasion of Ukraine it would be too easy to forget about human rights issues in China and specifically, Hong Kong. Sam Cheuk, the author of the poetry collection Postscripts of a City Burning, hopes the world will keep a candle burning for Hong Kong. His book is a collection of diary-like, untitled poems, or “postscripts,” which describe day-to-day Hong Kong’s existence in the midst of the increasingly brutal government crackdown on the 2019 anti-extradition law and pro-democracy protests. Among the difficult questions, he poses in his poems is how do you love the city of your birth, yet leave it behind? Sam Cheuk effectively uses satire and surrealism to express his uncertainty, his anger, and despair about the destruction of freedom-loving Hong Kong.

After teaching in Hong Kong for twenty years myself I can relate to Sam Cheuk’s remorse about leaving former students behind.

In the next stanza of the poem Sam Cheuk shows us the bravery of young protesters facing possible reprisals in prison:

“They announce their names, / yelling ‘I will not kill myself’ / while being dragged away.”

Cheuk’s guilt and grief come through strongly in the final stanza of that poem: “The student is still / messaging me via / an encrypted app, assuring / he’s safe for my sake.”

In 2014, a significant number of my own teenage students joined Hong Kong’s 79-day pro-democracy sit-in, Occupy Central. Many of my colleagues and I allowed students involved in Occupy to hand in assignments without attending class. It is hard to convey how heartbreaking it is to watch as young people fighting for freedom of expression and assembly are beaten, tear-gassed and jailed. Yet, Sam Cheuk does so in his beautiful and powerful poem-entries in Postscripts of a City Burning.

Joining the protests is one way to feel you are doing something meaningful. In 2019, I did so myself five times. In Postscripts of a City Burning Sam Cheuk recounts his innumerable protest experiences. He participated at a much greater risk to himself than I ever faced. When I asked him about his protest experiences he downplayed the numerous times his shoulder was dislocated during conflicts with police.

As he prepares for another night on the streets, Cheuk’s narrator riffs on the traditional trope in Chinese poetry, “sea of clouds”:

He is driven by the impulse to protect “those whom I can call / brother, sister… faithful / as your native son” Like Hong Kong’s beloved son Bruce Lee, hero of the protesters and many Hong Kongers, Sam Cheuk tries to flow “like water”, but feels as “unabided.” (37-38).

Sam Cheuk’s intense empathy for the protesters leads him to inhabit the persona of a young woman preparing to leave her home to join a protest. In a letter to her family, she explains that her commitment to the protests is more than “teenage rebellion,” expresses her filial guilt: “If I don’t return then you’ll probably / be reading this right now. // In case I’m missing, let me say again…you have done nothing wrong…sorry I was an ungrateful daughter.” (71-72)

Through Sam Cheuk’s eyes we also briefly glimpse the humanity of the police. “Don’t call them dogs,” he tells a young protester. “…they are people / who have reasons of their own. //  Reasons that put a baton / to the nape of your back.” However, his deepest empathy is reserved for protesters: “Keep going, add fuel..” [ga yau] he urges, “Where you stand, winning / or not, at least you’ll leave / a shoe print.” (39)

During the 2019 protests described in Postscripts from a City Burning, Sam Cheuk was not working in Hong Kong. Although he was just visiting, he dreamt of teaching his Hong Kong students Milton’s poem of loss: “‘Methoughts I Saw my Late / Espoused Saint’ to ears foreign / to its sound, too young to know the longing / it cleaved towards….” (69)

When Milton awoke from the dream of his deceased wife which inspired the poem, he confronted her death in a new way. Perhaps Sam Cheuk is saying that during the 2019 protests he awoke from his dream about what Hong Kong claimed to be—a city of freedom and opportunity. When Cheuk quotes Milton in his poem he foregrounds Hong Kong where English was the language of the elite and acted as a barrier for many. English as a medium of instruction (EMI) and Chinese as a medium of instruction (CMI) schools, reinforced that division after the 1997 Handover.[i]

In my experience as a gweipo in Hong Kong, although the city was a multicultural meeting place where east met west, opportunities were contingent on privilege. In her collection about Hong Kong, Marvels of a Floating City and Other Stories, Hong Kong writer Xi Xi refers to Hong Kong as a mythical, surreal place: “Many, many years ago, on a fine clear day, the floating city appeared in the air in the full public gaze, hanging like a hydrogen balloon.” (3). [ii]

Xi Xi’s collection portrays the mood of Hong Kong in the 1980s while the Chinese and British governments negotiated Hong Kong’s fate and the “Handover” back to China in 1997. Xi Xi, like so many Hong Kongers of her generation, was a refugee from Maoist China. She describes Hong Kong as an illusion. She is clear-eyed when she proposes, “perhaps a floating city whose existence depends on a miracle is not a permanent city.” She continues, “In that case, is its destiny really in its own hands? What if the gravitational forces of the ocean and the sky change, or if the god of destiny tires of his game?” (11)

Like Xi Xi, in spite of his love for Hong Kong, Sam Cheuk has few illusions about his city and its fate. Referencing Yeats’ “widening gyre,”—that movement of history towards chaos and instability— Cheuk considers “the mishmash fiction / of an existed town, recounted / thru binoculars from an elsewhere / terra firma, calligraphic script hanging / above ethereal mountains, before them / insinuation of greener pasture opening…” (75-76)

Reproductions of surrealist Rene Magritte’s work appear throughout Xi Xi’s short story collection about Hong Kong.  Appropriately, they include the apple which is not an apple (9), and on the cover, “Castle in the Pyrenees” which depicts an edifice on a boulder suspended in mid-air—evoking Hong Kong’s towering skyscrapers in its mountain setting.

Throughout his Postscripts of a City Burning, Sam Cheuk’s photographs showcase the surreal in the deconstruction of roadways during the protests—literally dismantled brick-by-brick by protesters looking for projectiles. “Renovation”—the common local term for it. Destroying the old order, the motivation to, “Burn, ashes to ashes” Cheuk’s narrator tells us. (67)

How to endure the sacrifice of human lives during the fight for freedom and the disintegration of hope? Love. Throughout his collection Postscripts of a City Burning, Sam Cheuk addresses a beloved. Is his beloved the city, adorned with the same passion with which Rumi loved god? He seems to be addressing his city-lover in this beautifully worded poem-entry on page 35:

“Your face, turning away, …There is no shame in wanting / to be more beautiful, // whatever happiness it is / you find in your secrecy / behind your hair trellising / the meridian of your back.”

“What is it you wish for me / to witness?” Cheuk’s narrator asks his lover. Cheuk’s Postscripts of a City Burning seems to be asking Hong Kong that throughout his collection.

In spite of the ambiguity in Cheuk’s love poems, I think his lovers are as human as Hong Kong: “let’s find a way out through our skin,” his narrator urges. (58). During difficult times his lovers seek solace through intimacy, their desire a ferocious resistance to repression.

While I was reading Postscripts of a City Burning I relived my own sense of loss and remorse about Hong Kong. Sam Cheuk’s book powerfully evokes the surreal nature of day-to-day life during the protests when tear gas regularly enveloped neighbourhoods like Kowloon’s Sham Shui Po, drifting into flats where residents were helpless to flee, the carcinogenic dioxin clouds giving many people extreme headaches and nausea.

With his signature wit and satire so reminiscent of Hong Kong for me, Cheuk references the sacrifice of Hong Kong’s youth through a description of his favourite snack (66): “deep-fried capelins, each fish within it / a genocide, we used to joke, 80% / of its weight made of roe.” Exhausted by grief, Cheuk’s narrator shares, “I haven’t the stomach…” He muses about the destruction of the Polytechnic University during the eight-day siege in 2019, “Had the government known …they wouldn’t need / to build a new campus for detainees / across the border, the old one still / smouldering.”

He contemplates the end days of the old Hong Kong as he eats a “sui loong bao [Cantonese], or Xiao Long Bao [Putongua]…little dragon bun” unsure which pronunciation will become “the correct one.”

I found Postscripts of a City Burning a beautifully written, deeply moving diary of resistance, rage and despair. It evokes the mood of so many Hong Kongers during the intense protests of 2019. Sam Cheuk’s poems have re-kindled the candle in my heart for Hong Kong.