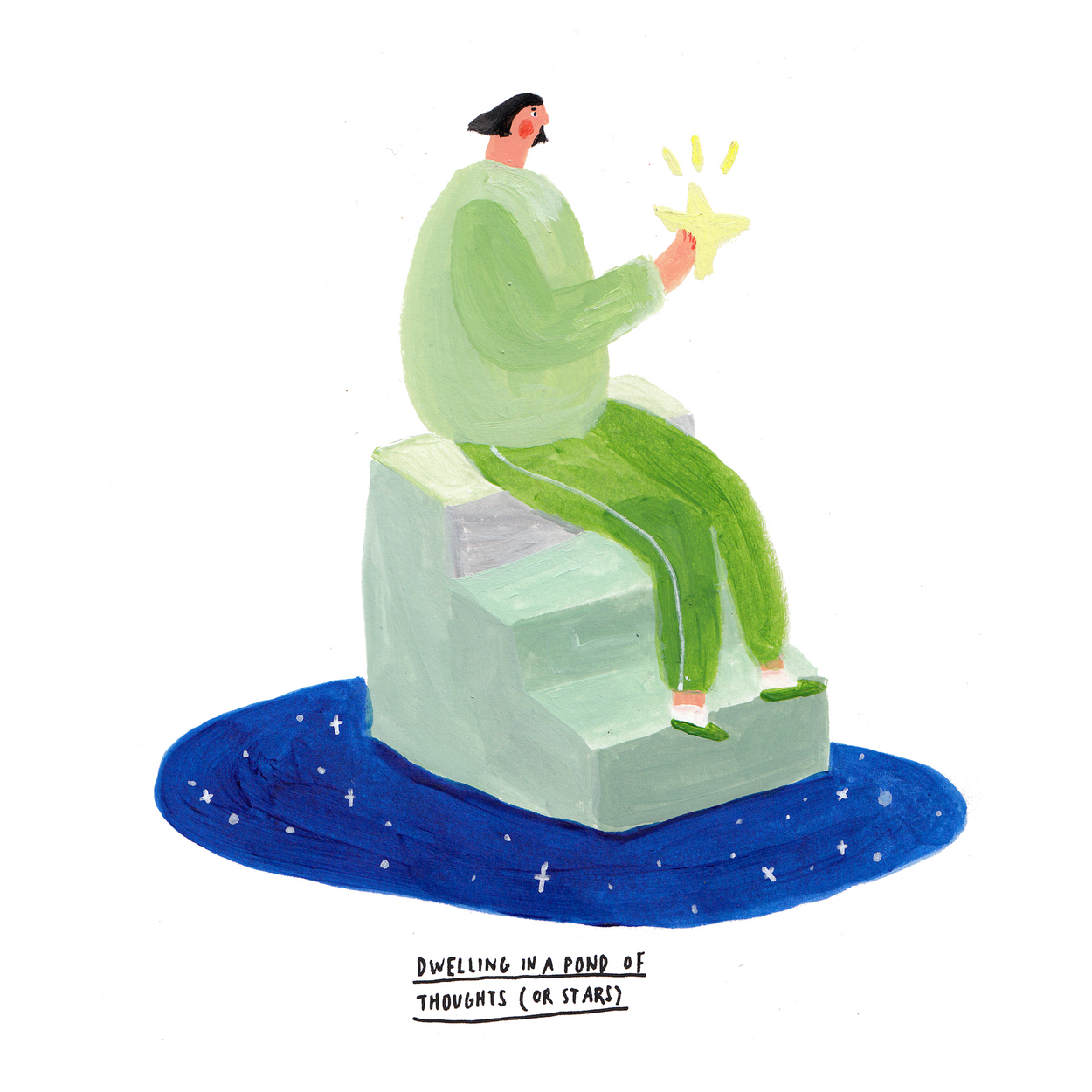 Traces from the Li Po poem, “Quiet Night Thoughts,” threaded through my memories and thus, my writing. In trying to recall the childhood poem, I researched Li Po and learned that in 725, he ventured away from his home in Sichuan Province at 24 years old to wander and write. My ancestors also left Sichuan, but my grandfather did so to flee Communism. Later in his life, Li Po was exiled from China. This time, he was condemned to roaming and his writing faltered. His homesickness was finally put to an end when he tipped over in his boat drunkenly. He drowned, grasping at the moon’s reflection in the water: the moon that beckoned him home all those years. This is my retelling of his story.

When Li Po was seven, he noticed that the houses in his alley shouldered each other for more space. So, when he and his cousins strutted down the streets, they stretched their arms in a big, taunting yawn.

They were the only kids in their Sichuan neighborhood so all the adults had permission to punish them. The rotting-mouth-uncle swore at them for ding-dong ditching his house. The missing-teeth-granny spanked them for kite flying over her flowers. The tattered-shirt-grandpa sandal smacked them for force-feeding his dogs.

With every line of eight jutted butts the cousins formed to be spanked, Li Po’s heart swelled for his cousins and his village. And because punishment and affection came hand in hand, Sichuan adored the kids as well.

Their neighborhood was a maze that looped. Li Po pinched and pushed his cousins out the door of their A-Ma’s house in a race back home. Being one of the youngest, he stuck to the main alley and sprinted like an overripe tomato, sneering at the five year old cousins who panted from behind. But, the nine- and ten-year-olds all returned to the house in half the time he did, looking half as sweaty. It became clear to Li Po: home was a place of time travel. He just needed the older cousins to take him to the portal that returned them home.

Li Po rubbed his hands together and bai tuo—begged—the older cousins to divulge their secret. But, it turned out, the clever cousin took shortcuts through the alley with the $1 candy store. The conniving cousin hid behind the motorcycle and jumped out at returning footsteps. The boldest cousin flipped over walls and clothe-lines like a ninja. Li Po’s rubbing hands dropped to his side. At seven years of age, he was old enough to see that this made sense. But, at seven years of age, he was young enough to hold on to his belief: you can always time travel back home.

The cousins had traced and retraced the outlines of the neighborhood. Hide-and-seek never lasted more than ten minutes now that they knew all the hiding spots. So Li Po led them to the gutter on the side of the street that carried the neighborhood’s sewage water. They had yet to learn its secrets. It was enclosed on both sides by slimy, moldy walls and the pathway was so narrow that there might as well have been a sign across the entrance: no adults allowed.

All eight leapt into the murky sludge with a splatter. The shade and stench swallowed their bodies.

The eldest advised them to breathe in deeply so they got used to the smell quicker. They inched forward towards the light, a team of brave little crabs.

Fresh air yanked them out at the end of the tunnel. The cousins tumbled out into an opening. They squinted as their eyes slowly adjusted to the vibrancy. Colorful flowers popped from the earth like lollipops on the candy store stand. Birds filled the air with songs, like ding-dong ditched doorbells. Yellow and white butterflies fretted in every direction, like kites caught in the summer breeze. Vines hung like clothe-lines, swaying in the breeze. They waved the insects away from their eyes and spat them out of their gaping mouths. Li Po marveled at his cousins, marbles glistening in the sun. He wanted to kiss them all.

“We need to find the source of the fertility,” Li Po suggested.

So he furrowed his caterpillar eyebrows in concentration. He cocked his ears to tune into the trickling water. Of course, it was the sewage water fed by the bathwater fed by the dirt and grime of bodies. It brimmed with life.

They ran home. Sweat trickled down Li Po’s bangs and sludge was smeared all over his radish-smooth calves. A-Ma claimed Li Po immediately and dragged him upstairs. He was her favorite grandchild.

A-Ma turned on the hot water faucet. The steam made each breath feel like a sip of warm tea. As she carefully lowered Li Po’s slippery body into the bathing basin like an offering, he dipped his big toe in the water. It prickled him.

But, A-Ma shook her head with a chuckle. And sure enough, the water was the perfect warmth when she slid his whole body into the circular basin. He loved listening to the water brim over, waterfalls cascading to tuck him in. He waited patiently for his body to soak up the water and sure enough, he slowly transformed into a sea creature. He jerked his clumsy tail in the fish tank. The water splashed at his tiniest movement.

He took A-Ma’s hand to compare their fingers in the steam and informed her that he was old like her now. But his wrinkles were exaggerated like noodles whereas A-Ma’s were genuine in their age. After A-Ma scrubbed him with soap and accidental nails, he welcomed the dead skin that collected around the outline of his stomach and clung on the edges of the basin. These were now the most treasured parts of him. He pushed the milky flakes away from him in the tachi-way his A-Ma does, only to beam when the waves returned them to his body.

He stood up in the basin. The pool of leftovers from his body splashed and swirled down the drain. His mind traveled with the dirt and grime down the sewage. He smiled as he imagined the flowers blooming in the opening of the gutter. As A-Ma rolled a towel over his bulging tummy and dug under his armpit, he recited the poem: the one about the bed, the moon, and the frost. A-Ma flapped her arms to the cadence of the poem like a conductor.

In San Francisco, Li Po travels through hills so steep cars cling on to each other to keep from sliding. Slanted houses pass by in a blur while passengers toss and tumble on the bus, like bell peppers and eggplants stir-fried in a pan. Li Po rides the 1 down Sacramento Street.

He is uncomfortable with the dirt and grime of his own body from this foreign land. He spots life poking out from the cluster: a splash of Chinatown lanterns, a dash of graffiti in the sun, a glimpse of the streets dropping into the ocean. They surprise him like an exposed belly brimming through an outstretched shirt.

In his mind, he races his cousins down these hills to the setting sun. On the bus, he traces and retraces the outlines of buildings until he’s memorized every feature.

The bus brakes and lurches forward. His body slides down the seat. He yearns for the whiplash to bring his body back. But it never comes. He is suspended with no return.

He ventured from Sichuan to this tilted city to write poetry. At first, all he tasted was exhilarating freedom in his first fruits of knowledge: the quiet, suffocating wants transformed into the first kiss. He devoured pieces of literature that whispered into his enraptured ears. And, there were the new friends who permitted him again and again to fumble with his words as he stumbled on his identity. But, each discovery and burst of courage added more distance to home. He sent a poem back home with his newfound language. No response. His travel feels like an exile now. He wanders more and writes less in a land he holds no heritage to.

He gets off at Drumm and Clay and the darkness outside swallows his body. The moon’s round edges blur like ink in the sky. He plunges underground and settles into a worn seat on Bart. The stench is detectable no matter how many breaths he has taken.

The Bart starts slowly and whooshes like waves as it settles into its rhythm. It gains speed and bursts out of the narrow tunnel into the open night. His ears fill with pressure as if underwater. The whole train slants. For a brief second, Li Po is suspended on the tilted tracks. He gazes at the bright moon reflected in the water below him and grasps at it. The Bart lowers his body into the water, an offering to end the exile. Li Po knows the water will transform him into a sea creature. He leans in, trusting the water to be the perfect warmth when it tucks him in. But, the Bart softly straightens on its track and lifts him and his outstretched arms up. They speed into the engulfing darkness of another tunnel.

The moon is gone.

The Bart accelerates. Li Po yearns for the breath at the end of the tunnel. The screech on the tracks is deafening. The compartment trembles. They are trapped in the kettle’s final scream.

Are they traveling through time? Has he returned?

The blinding streetlights yank the Bart out into the open night once more. At twenty-four, Li Po knows there is no time travel portal for him to return home through. He notices the moonlight flooding into his Bart compartment. Is that frost on the floor? Outside the Bart window, it is pouring. He watches the rain wash away the dirt of the streets.

Li Po imagines the mud pool and swirl down the sewage. The gutters must be brimming with grime.

So, in the quiet night, he remembers what can be born from the dirt and grime—his dirt and grime. So he looks up at the inky edges of the full moon and lowers his head to write the childhood poem.

Ying-Ann (Annie) Chen was born and raised in Taiwan, grew up in an international
school in Shanghai, briefly lived in Michigan, read and wrote in Berkeley, and is now
living in San Francisco, a city she adores. She majored in English and Social Welfare
at UC Berkeley and is now working at API Legal Outreach. Her work can also be
found in TaiwaneseAmerican.org and California Magazine.