These Are Our Streets!3 min read 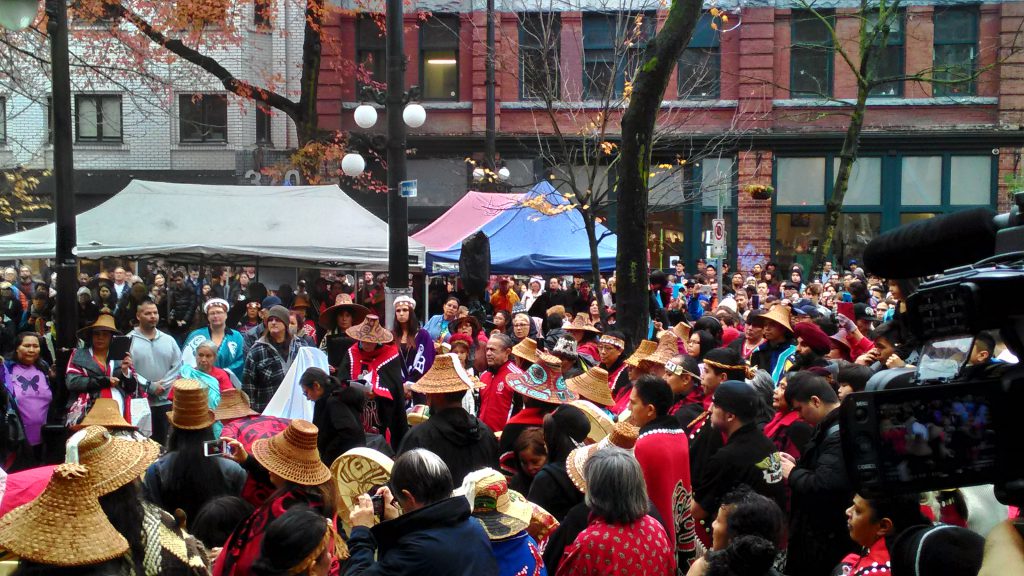 The peaceful crowd forms a circle on the cross of Main and Hastings, fanning out indecisively from the Carnegie Community Centre and on to the crosswalks. The traffic lights continue to flash, green, amber, red, and the last few cars squeeze their way past. In the light November rainfall there is calm in the city as First Nations people in regalia stand outside, awaiting the arrival of the totem pole. It arrives at last from around the block, wheeled by volunteers, carved over several years by a team led by Bernie Williams. The procession commences, heading west on Hastings towards Pigeon Park, near where the rails still embedded in the streets once cut through the city. Emptied of traffic, the streets become a meeting place, the sound of drums and conversations replacing the monotonous drone of cars in an area notorious for poverty and drug addiction.

At Pigeon Park the crowd swells. The narrow width of Carrall Street is not enough to contain it. The rain intensifies as the ceremony continues. I do not understand the words or the symbols but I appreciate that I am seeing something important. The workers fasten winches around the pole, slick and damp. It has been carved from a cedar tree almost a thousand years old, and as it rises, the crowd is expectant and jubilant. This one is particularly unique—Its design reflects the cultures of the people who have made Vancouver their home, before and after the arrival of the first Europeans.  This is a reminder that struggle and survival always continues. There is gentrification, for starters, and underlying biases that often go unnoticed. But the desire to fight and resist is as staunch as ever.

Through speeches we are reminded of this fact. We are also reminded of the Komagata Maru and the forced removal of Japanese Canadians from the city. This is why the names Sen̓áḵw, X̱wemelch’stn, and X̱wáýx̱way do not appear on maps. That is why Powell Street bears few traces of its past. 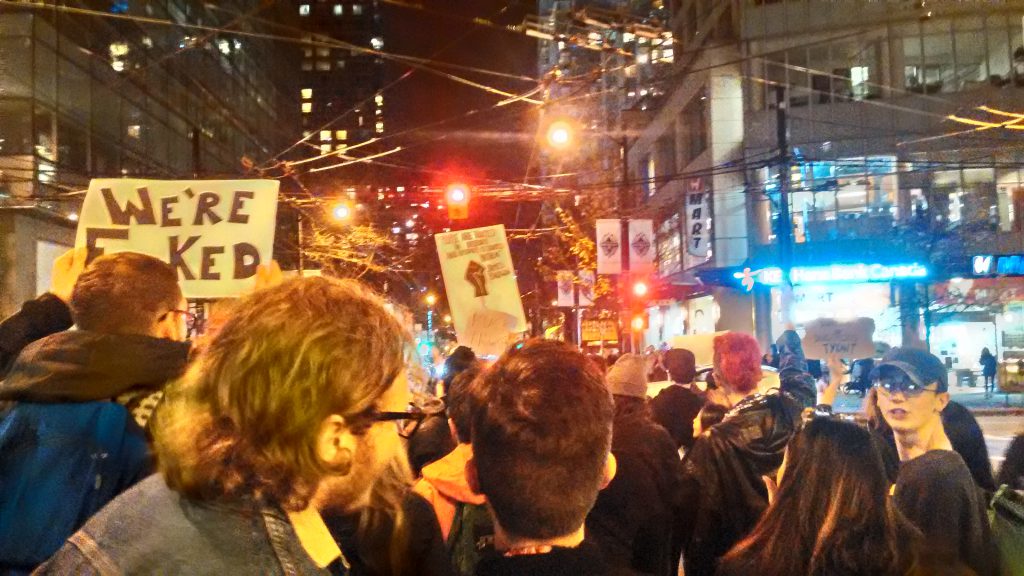 On my way to Chinatown I run into the demonstrators. I hear them before I see them, their numbers swelled by people joining in along the way. Three days after the elections across a border less than fifty kilometers to the south, and a spontaneous show of anger has broken out. Seeing them marching on the street, waving placards and posters, I hurry after them. The cars stall as they chant and hurry down Georgia, along Granville Street with its nightclubs and theatres. No Donald Trump, No KKK, No fascist USA. No Donald Trump no KKK no fascist USA!

On the sidewalks people are snapping photographs, the fall chill lightened by unseasonal warmth. In the next few days and weeks ugly incidents would rise in Steveston and Ottawa, but that night there is only outrage, expressed in the furious, fearful expressions of the crowd. These are our streets! A man on a bicycle shouts, cycling and stopping outside CBC. Whose streets are these? These are our streets!

At last I break away, watching them disappear down the street, a trail of hundreds forming. When I keep walking on, they disappear completely, as if they have never existed. Friday night silence takes over again in the east side of the downtown core. Pedestrians here do not realise what just happened in the trendy districts. They are too far away to see it.

And in Pigeon Park, a few blocks down, a brand-new totem pole stands in the early night.