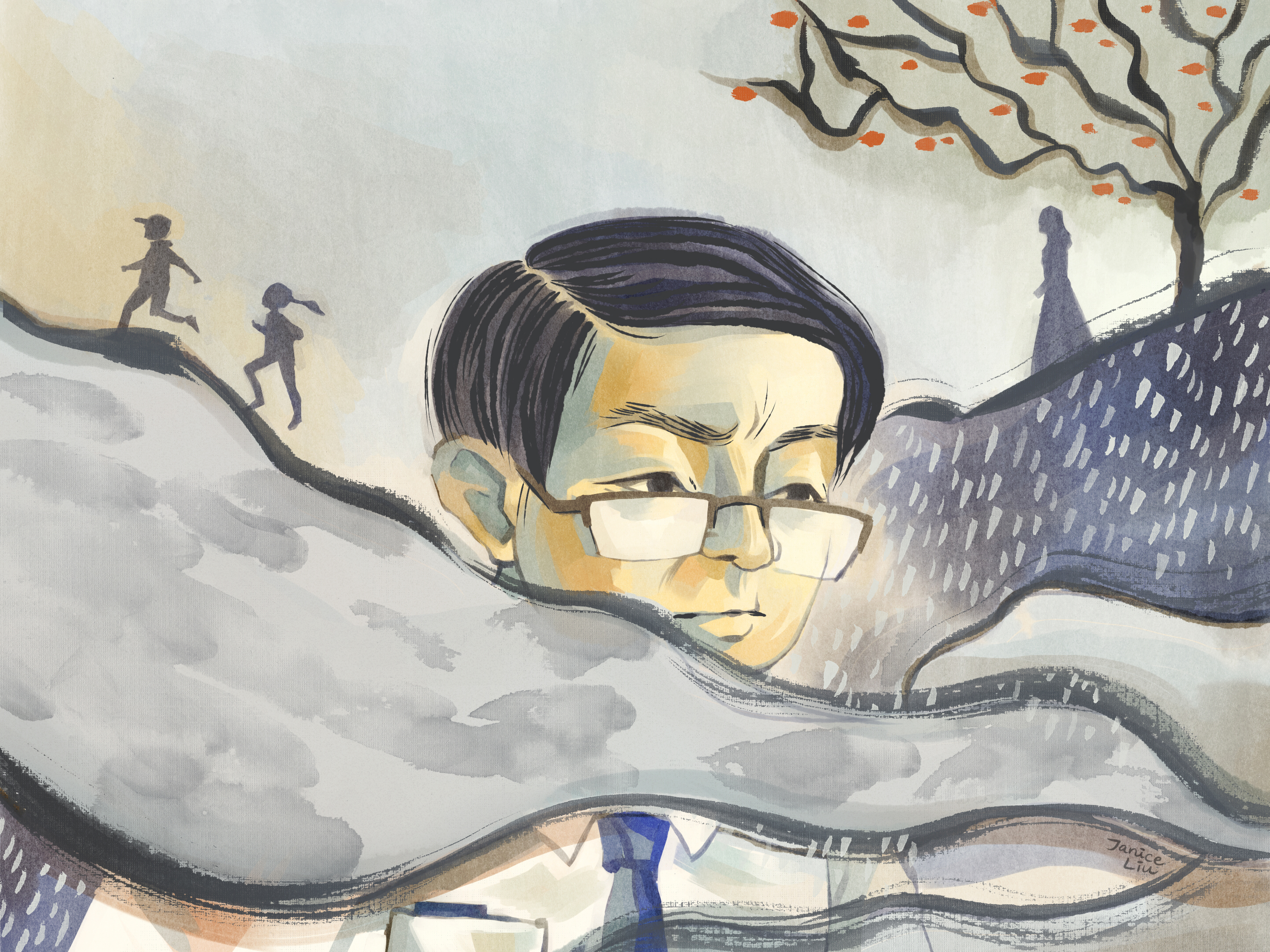 THE COMPANY MEN insisted they were correct.

Almost everything about the new business cards was familiar: the logo, the layout, the lettering. But one change worried Hak Kun. His family name wasn’t “Dul”—it was “Han.”

Hak Kun took an elevator to the underground lot, then drove out of the city. He drove toward his wife’s father’s orchard, where his wife liked to sit in the shade beneath the persimmon trees and stitch things. The keys to his car were attached to a bobble she’d sewn.

His large, black sedan filled the width of the country road. It had been many months since he’d last visited the orchard. A tree had died. (Hak Kun suspected that the man he’d paid to cut the tree down had slept with his wife in the grass.)

“You’re already finished everything at the office?” she said. “We’re leaving tomorrow for two weeks!”

Hak Kun thought of how their little one shook a tambourine.

“Dul Hak Kun,” his wife scolded him, “forgetting your daughter’s graduation, from your own alma mater, in London!”

She packed her needles. Hak Kun checked the card again, drawing it from his breast pocket and cupping it in his hands. “Dul” glittered softly in the dusk.

THEIR DAUGHTER met them at Heathrow.

The girl promised to give her parents a tour of the best new developments in the city. She had also arranged meetings with her father’s old professors and a day at the British Museum. A full itinerary.

But all the people in London who claimed to know Hak Kun proved unfamiliar to him: Professor Groom, Professor Hadley, the publican who called him Mr. Dul.

Hak Kun tried to keep smiling. His daughter insisted on dinner at the Globe.

A SOLDIER was making instant noodles in fatigues when the family arrived home in Seoul. The daughter dropped her duty-free bags and ran to hug him. “Sis,” said the soldier, “want some ramyeon?”

This must be my son, thought Hak Kun. He’s on leave from the army. I am his father. Hak Kun put his hand on the card in his pocket.

The next day, Hak Kun confessed.

“I’ve been given a new name,” he said. “And I’m having trouble remembering things.”

These moments were like looking down to see a different tie than the one he thought he’d put on.

“Maybe you should talk to your old friends,” said his son. “Tell me and I will change my name whenever you say. It is still ‘Dul’, yes?”

But all the people in London who claimed to know Hak Kun proved unfamiliar to him: Professor Groom, Professor Hadley, the publican who called him Mr. Dul.

THE WINE HOUSE is familiar. Four childhood friends, now men, assemble. The fifth member of their party is late. A sixth isn’t coming.

The serving staff brings another kettle. Hak Kun places his card on the table.

It is studied closely, held steady in their worn hands, peered at over several lenses. They ask if it comes with a higher salary or more vacation or the possibility of sending his son, perhaps, to Brazil. None of them mention the name.

Hak Kun takes the card back and reflects their movements, performing a study himself. He tells them things are the same, just another update. He drops the card on the table again as his friends congratulate him on his daughter’s graduation. They empty their tin cups of the cloudy local drink. Another kettle arrives.

The men talk for two hours before the oldest of Hak Kun’s friends shows up. He’s wet. They stand and grasp at him, call him a bastard, complain that he’s late.

“Too late,” the oldest friend agrees. “Ah, rain, you’ll be the death of my ancestors.”

Music plays under their chatter. Smoke hangs deep in the night. The serving staff appears on call, clears plates, takes orders, notes debt. The card on the table is smeared with drops of red, half-hidden under a plate of kimchi when the oldest friend finally sees it. The oldest friend goes to the bathroom to call his wife. “What is Hak Kun’s family name?” he asks.

Back at the table, the men are ready to leave. One of them pays. Another flirts harmlessly with the staff.

“Han Hak Kun,” says the oldest friend when he returns, “you’ve left your card on the table.”

They listen for a moment to the strings of the gayageum coming over the wine house speakers. A melody grows, bar by bar into a wandering refrain.
Hak Kun looks out the window at the lights of a twenty-four hour store across the street and decides to buy two umbrellas.

Angus MacCaull has recent work in Prelude, filling Station, and The Review Review, along with work forthcoming in The Town Crier and CV2. He lives in Nova Scotia where he is an associate fiction editor at The Antigonish Review.