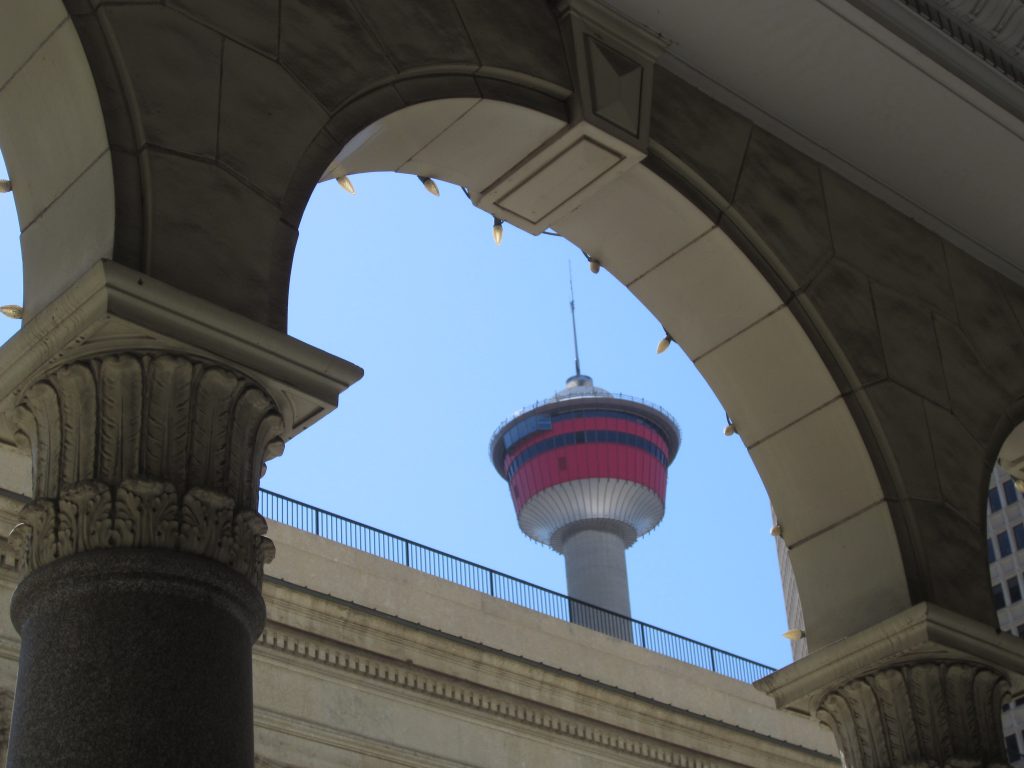 I was in Calgary again.

A heat warning was in effect and direct sunlight was blinding, leaving me dazed by how bright and hot it was. In the summer it became easier to make decisions because I became impatient and made faster choices with much fewer considerations. This was probably why I had impulsively bought my bus tickets a week earlier and wound up back in Alberta after an absence of almost three years.

I would sometimes pay visits there when I was on an eight-month co-op in Edmonton, taking breaks from the quiet northern city to tour its bustling southern counterpart, made prosperous by oil money. Return visits to Vancouver were expensive unless I was ready to endure more than half a day on the bus, so Calgary was the perfect replacement. Its vivid skyscrapers jutted out like artificial mountains, dwarfing the low hills as the prairies opened up to the east. In their shadows I would visit friends, and we would wander the neighbourhoods, reminiscing about life back at university now that we were in unfamiliar surroundings. But now they were all gone and off doing better things. Meanwhile, I was freshly unemployed and trying to figure out my next step.

It seems that whenever I have nagging problems, my first impulse is to avoid them and to get as far away as possible. In Edmonton I had been gripped by a growing sense of loneliness as I realized just how hard it was to stay in touch with the people I knew back on the Lower Mainland. Despite the fact that we were just a two-hour flight apart, connected so easily through social media, it was not possible to stay in touch properly. So my visits to Calgary and elsewhere in the province served to help me forget that I was cut off, separated by the width of a province larger than many countries.

Return visits to Vancouver were expensive unless I was ready to endure more than half a day on the bus, so Calgary was the perfect replacement.

One afternoon I had no definite plan in mind, so I just wandered into Inglewood and down by blue waters of the Bow River. I had gone job-hunting at the library in the morning, and by the time afternoon rolled around I was in no mood to do more work. I passed the hostel where I had stayed in during my first visit. I recalled arriving around midnight and the C-trains were still rumbling down the tracks. Each time they came to the junction at 4th Street Southeast and 7th Avenue, the bells rang non-stop as the barriers came down to let the train noisily rumble past. Drunk backpackers cursed the train for disturbing their sleep. “Go the fuck to sleep, Calgary!” someone swore. But I remember being excited just to be somewhere new. The city was mine to explore. 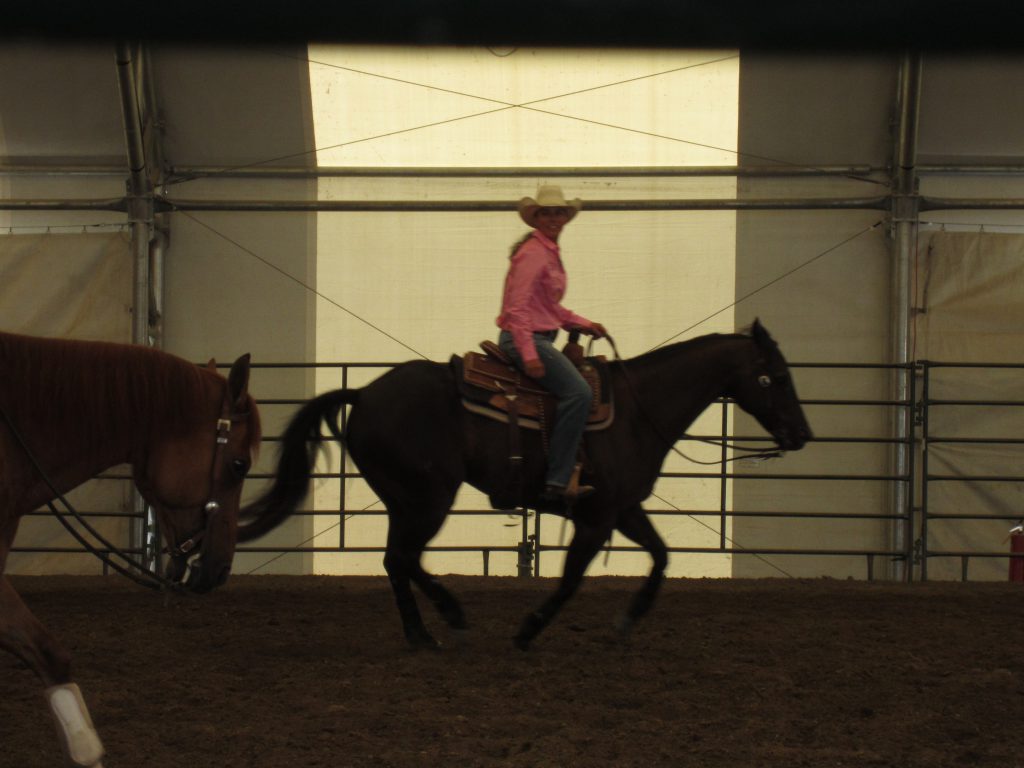 At the Stampede. Photo by William Tham.

Before oil was found, it was the railway that had spurred Calgary’s growth. The city had begun as a small settlement with a detachment of the North West Mounted Police standing guard as borders began to take shape. Treaties were signed by parties who misunderstood and misjudged each other. The tracks extended, encroaching on southern Alberta from both directions. Eventually the last spike was driven into the ground around 450 kilometres west in Craigellachie, linking a country from ocean to ocean. Then came settlers dreaming of riches, and artists who were encouraged by the Canadian Pacific Railway to capture the wild splendour of the new western frontier. No, it didn’t matter that their paintings showed a supposedly uninhabited wilderness, and no, it did not matter that the Niitsitapi people were forced by a variety of unequal treaties into Reserve land, their territory now split between the borders of the United States and the brand-new Dominion of Canada. The resulting artwork left a lasting impression and a century later we arrived in Banff on a day trip, taking in the sharp slopes of the Bow Valley mountains from our lookout point. Down below us were the turrets of the Banff Springs Hotel, giddily reproducing the contours of a Scottish castle from a distant island. The town bustled with its tourists who sweated in the warmth. I enthusiastically pointed out the places I had been to on my last visit, but perhaps I was jaded by the traveling that I had done since then because Banff looked tackier and more touristy than I remembered. It looked better through the eyes of those wandering artists.

As an answer to the artwork that romanticised colonial history, Kent Monkman captured the native experience through his darkly humorous and unsettling exhibition at the Glenbow Museum on Stephen Avenue. ‘Shame and Prejudice’, told through text, images, and objects, followed the time-travelling gender-fluid Miss Chief as she resiliently witnessed decay, residential schools, urban poverty, and discrimination. It was a sobering reminder of the realities of the past. Patchworks of treaties with dozens of nations and groups had been crucial in piecing the dominion together, and in light of the Canada 150 celebrations their significance had become more salient than ever before.

Direct sunlight was blinding, leaving me dazed by how bright and hot it was.

But outside, the city was busy partying and celebrating a frontier past that had never really existed. Life was hard and times were tough, but the cowboys of the far north had made it! The Stampede was now in its second century, with boots and white Smithbilts everywhere. In the afternoons military jets indulged the crowd with low-altitude flybys, engines screaming as the fighters rounded the Saddledome before taking off northward. The mayor was on horseback, tipping his hat to the crowd on the morning of the Parade. Native riders waited on patient horses in the shadow of the Calgary Tower, indulging the visitors who flooded the city. Occasionally things turned nasty: bar brawls, short tempers, and annual deaths of animals competing in the rodeo. But other than that the carnival experience boomed. Although it started in a divided past, the Stampede now served as a curious melting pot in an accidental metropolis. 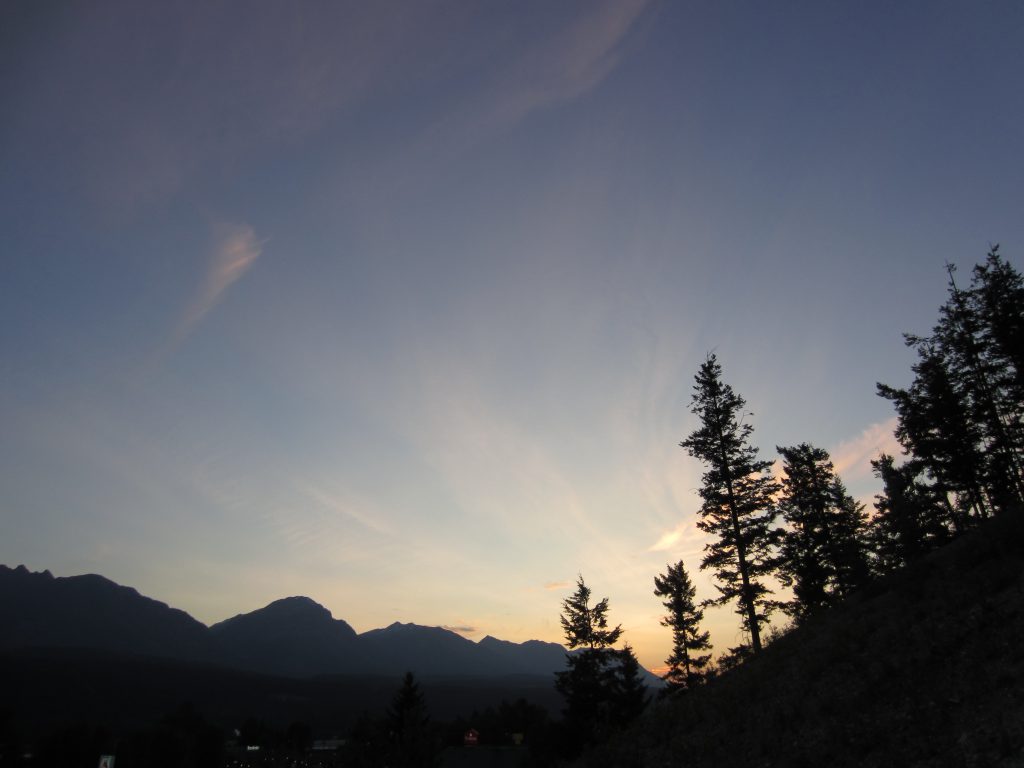 Summer evenings in the Rockies. Photo by William Tham.

The day before we left we were up on the fringes of the city. The Olympic Park lay just across the highway, and the hills offered spectacular views of the faraway downtown core and the distant Rockies, indistinct in the haze. Night settled slowly over the prairies, bringing with it a chill that reminded me how short the summer was. At sundown pinpricks of fireworks burst over the skyscrapers, like blooming wildflowers in the night. And the next day I found myself back on the bus for the coast.

My time in Alberta had been punctuated by a series of long bus rides, seemingly interminable as I traveled north and south in bids to stave off restlessness. I liked those journeys, and wistfully hoped that they would go on forever. That way I would always be in transit, hovering between vague destinations and spared the necessity of figuring out what to do once I got off. A friend once remarked that her time spent studying in Vancouver had been unreal, serving as a temporary break from reality. For me the holiday in Calgary served the same purpose. The moment the bus arrived at Pacific Central Station, once past the wildfires in the Interior, it would be time to sort things out again. Every journey always has an end point.

A freight train roared beside the highway, dragging a mile of cargo over the mountains. Dotted around were the mythic reminders of an ambitious nation-building experiment, like the Spiral Tunnels and the Kicking Horse Pass. But soon they were swallowed up into darkness as the Greyhound continued on its way.