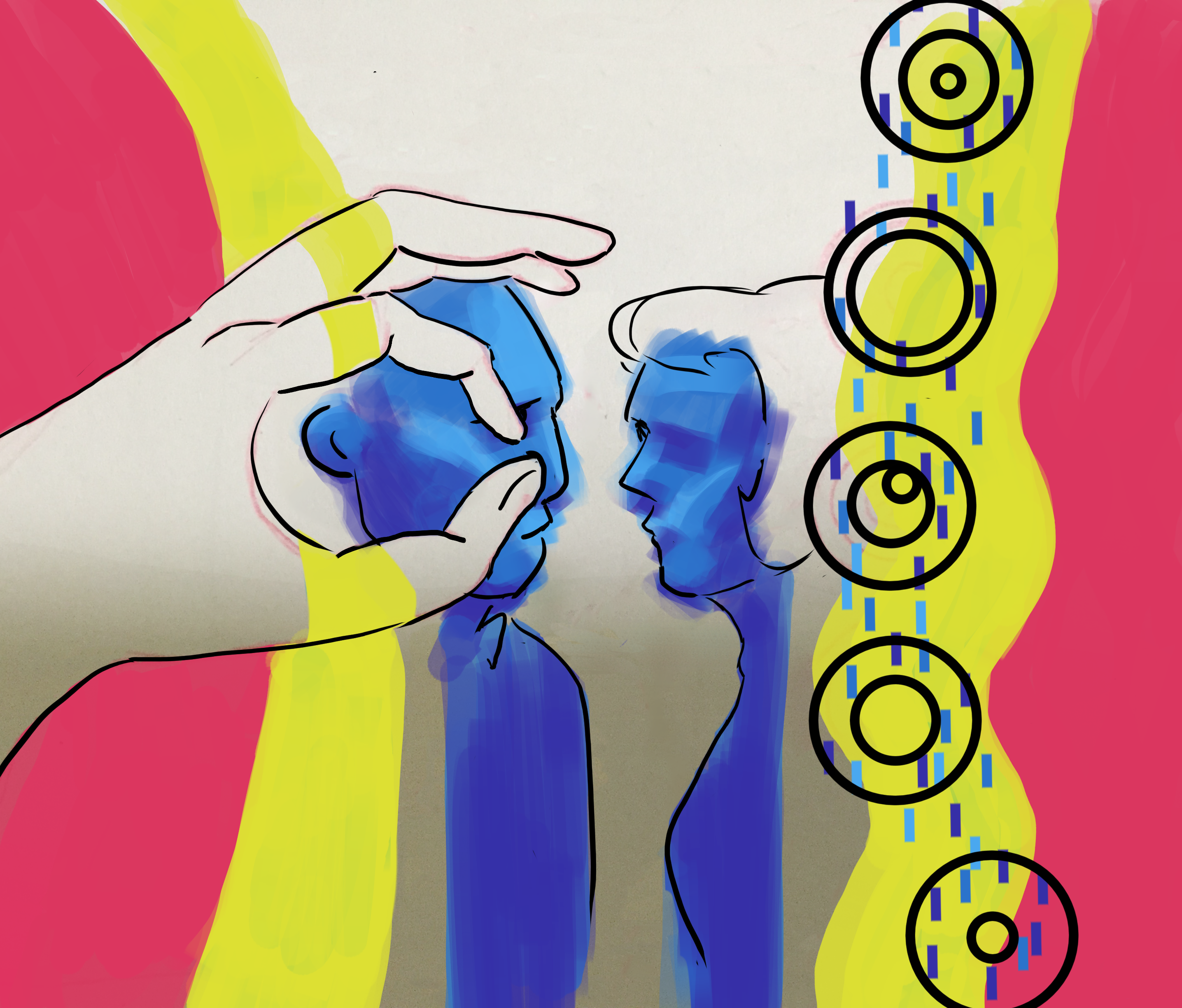 Gerry, the groom, quivered as he stared into the eyes of Carol, the bride, the sweat on his brow not visible in the 24 frames that I shot him in. If it were a 60-frame action shot, it probably would. The couple requested that I shoot them in filmic quality. For the first time, I made the mistake of filming the groom’s side. As the lead shooter of my own zero-budget enterprise, I preferred to shoot the bride—it was her moment to shine, after all.

Mickey Filbinder, my second shooter, ended up filming the bride. He could not stabilize his shots, his location sound was fuzzy, and he sometimes forgot to remove the lens cap. These days, with a digital viewfinder, one could rectify the mistake easily but Filbinder had to wait until the last second to shoot. Having the lens cap on, he missed a few crucial shots in the past. I paid Filbinder $150 since 2009 and I still paid him $150 in 2015. For some reason he was always available when I asked, so I allowed some quirks to come along for the ride.

“Carol, I think you’re a real princess, because only a princess can love a frog like me,” Gerry said, completing his vows.

Somehow, something in my cold, hard heart cracked. But I maintained my poker face. I got the frame and the right reaction from Gerry. It was the money shot, and definitely would go in the same-day edit if I offered it. As bottom feeders like myself went, we only offered the basics because we were so damn cheap.

Marie Riviere shines in Eric Rohmer’s The Aviator’s Wife (1981). She perfectly portrays her role as Anne, a desirable woman in a man’s world where everybody expects her to put out. Francois, the romantic lead, confronts Anne about her past lover and Justin Trudeau body double Christian. However, she reveals that Christian only visited to break up with her.

As I watch the film, I turn to Annie, who cringes at that vulnerable moment. This is the second film with Annie today. The first film, Pauline on the Beach (1983) is a fun romp but this film we now watch hits way too close to home.

There is something very French about Annie. She stands at five-six with her matching blonde bob. She has a Jean Seberg allure, Brigitte Bardot-like coquettishness and a dignified stature straight out of golden age Catherine Deneuve. She has a thing for Guy Maddin, Hayao Miyazaki, and for some reason the French New Wave.

She’s still with her boyfriend, but I continue to indulge her fancy since he is not a big fan of arthouse. I’m deeply infatuated with Annie so I tag along as her oversized Scottish fold.

Filbinder stuffed his porcine face with a glass of 2014 Australian pinot noir. After the chunk in his throat went down, he held his finger up and took a large gulp of water. I nursed my Jack and Coke.

“This fall, after I shoot your last wedding,” he said.

I had my dad’s Nikon on a tripod, taking static shots of the guests dancing. At Gerry and Carol’s open bar, I opted for a highball while Filbinder ate for the both of us. He loved the free food at weddings and I would partake of the alcohol if there were any. I usually drank once I got my shot list and all my interviews done.

I waited for Carol to toss the bouquet, another speech, and then I headed home and transferred all my data onto my hard drive. I usually let the footage rest for a week or two. That way I could stock up on 500mg of Naproxen and some 1664 Kronenberg Blanc. It was easier to get through Filbinder’s shaky camera with slight liver damage.

Earlier in the year, Annie and I accidentally bumped into her boyfriend as we left the premiere of The Red Turtle. Her boyfriend knows who I am and how I feel about her. My ex-fiancé’s possible infidelity is the only thing preventing myself from escalating my relationship with Annie into a full-blown affair. I empathize with the anxiety her man feels.

Since then, Annie and I see films at the Cinematheque whenever her boyfriend’s away. That way, our little film rendezvous appear less like trysts and more like a platonic affair. After all, all we ever do is watch films.

For fun, I would edit a divorce video when I get tired of editing the actual wedding video. I would notice all the little cracks in a couple’s relationship and the potential failings one would find with their in-laws. Back in 2012, I shot a pre-wedding video where I had footage of the groom still in bed with the strippers from the stag party. He slipped me an extra $200 to make the footage disappear.

I could honestly say, after logging twelve hours of video and six hours of Filbinder shakycam, that Carol and Gerry had a bright future ahead of them. I enjoyed living vicariously through the happiest day in their lives. I enjoyed it to the point where I hoped that one day, I would find that princess in my life.

I received a text message from Annie earlier today.

I want to be first fiddle. Six months of catching films with Annie holds an inconvenient truth. She has a boyfriend to come home to. I can never be that Murakami character who just accepts the affair for what it is and eventually made love with their paramours. It reminds me of Serge from The Aviator’s Wife. He never appears onscreen the whole film but when he pops up in conversation, they’re not just talking about Serge. They’re talking about me, forever a friend never a lover.

Filbinder and I caught a 7 Dunbar bus from Granville Island where we shot Gerry and Carol’s wedding. I noticed that besides our gear, Filbinder carried a tote bag full of 2014 Australian Pinot Noir bottles. That was another one of Filbinder’s quirks. He never failed to gather some post-wedding souvenirs. He was also pretty drunk after three glasses of the dry red. I had a couple of Jack and Cokes and I was still sober.

“When I get to Manila,” Filbinder began hiccuping in between lines. “I will find a hot girl like your ex, and we will have sex all day.”

I noticed that the Korean student in front of us moved three seats forward.

The drunk man behind us tapped me on the shoulder.

“Can you give me a job?” the drunk man asked.

“I’ll have to check the logistics on my next gig,” I said with a forced smile.

As he disembarked, Filbinder counted the wine bottles in his tote bag.

“I’m gonna get so drunk tomorrow, it’s gonna be awesome, I think it’s worth it. I think Carol and Gerry will be the best couple in the world.”

“Probably,” I said. “Hey how about we get a little quiet time the next seven stops, and then we can talk once we’re off.”

After a few minutes, Filbinder dozed off. He used my shoulder as a pillow for the remainder of the ride. At one point, I considered docking the guy another $50 on his last assignment. I changed my mind and paid him $200 on the his last job. Guy deserved it, being a loyal collaborator since 2009.

The Rohmer double feature finishes as Annie and I silently saunter towards the bus stop. She breaks the awkward silence with nonchalant small talk.

“What made you pick them?”

“How was your trip?”

“It was hard looking for a dress for the wedding—”

Annie stops herself as I quiver. My eyes, filled with quiet devastation, stare deep into hers. If this conversation ends up like Christian and Anne, it won’t end well, so I’ll take the subtext for what it is. Roles are reversed however as she is Christian and I am Anne. The heavy silence dissipates once we hit an intersection.

“Be well and go eat something.”

Annie chuckles as she does a double take and strides away. The worst part about a platonic break up is that there is an empty feeling atop an already empty feeling.

I received a text from Filbinder on my cell. To paraphrase the fifteen paragraphs of grief, he narrated that he found a good woman in Manila but because of his awkwardness, she ultimately gave him the cold shoulder.

I usually would feel a good deal of schadenfreude and use it to feel better about myself. However, I merely asked him if he learned anything. I didn’t get a reply.

Vincent Ternida’s whimsical brand of magical non-fiction makes his fiction realistic and grounded. His fiction pieces “Java Mausoleum” and “Guide to Canadian Urban Wildlife” appeared in Ricepaper Magazine on 2017. See more of Harry, Annie, and Mickey in Ternida’s upcoming novella “The Seven Muses of Harry Salcedo” to be released on September 2018. He lives in Vancouver, Canada.