This is the first in a short series of  articles based on William Tham’s experiences traveling in Indonesia, starting in Jakarta and ending at the Ijen Crater on its far east. 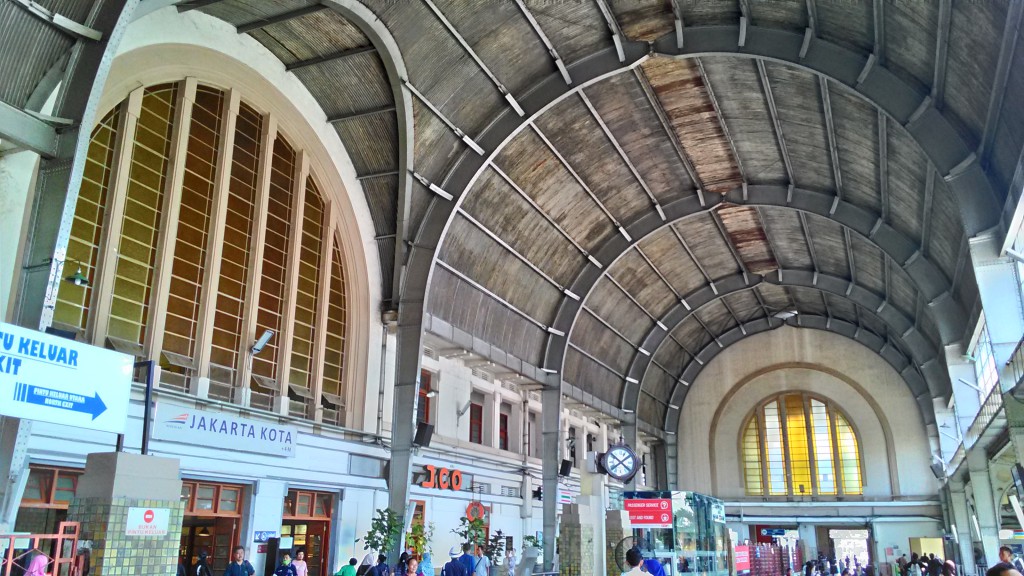 During Ramadan the pace of life on the islands of Indonesia slows down with workers going home early for dinner, self-reflection, and prayers. But in Jakarta it can be difficult to notice that anything has changed. The ‘Big Durian’ burns with a frantic energy, this city of millions clogged with rivers of cars and competing bikes and swarms of bajaj fleeing the urban crush at the north of the city for its outskirts. Under the grey smog guards in immaculate uniforms watch as the commuter trains donated by the Japanese clank past to Bogor and Bekasi, while locomotives at Gambir station scream past miles and miles of rice-paddy fields for Bandung and Surabaya. Workers toil underground to complete a massive mass rapid transit system that will finally bring the city into the modern age, while skyscrapers are in the process of filling the skyline. It is polluted, corrupt, and filthy-at the same time it is bold, proud, and determined.

Jakarta is yet another brash Asian city, competing to be cosmopolitan and sophisticated. But it is fighting against nature. Earthquakes wrack the country periodically. And experts predict that Jakarta will sink into the sea-it was built on marshlands and sea levels are rising faster than ever before. Crippling floods are already common, swamping low-lying areas like the Pluit district. But for now the city continues to burn with a manic energy. 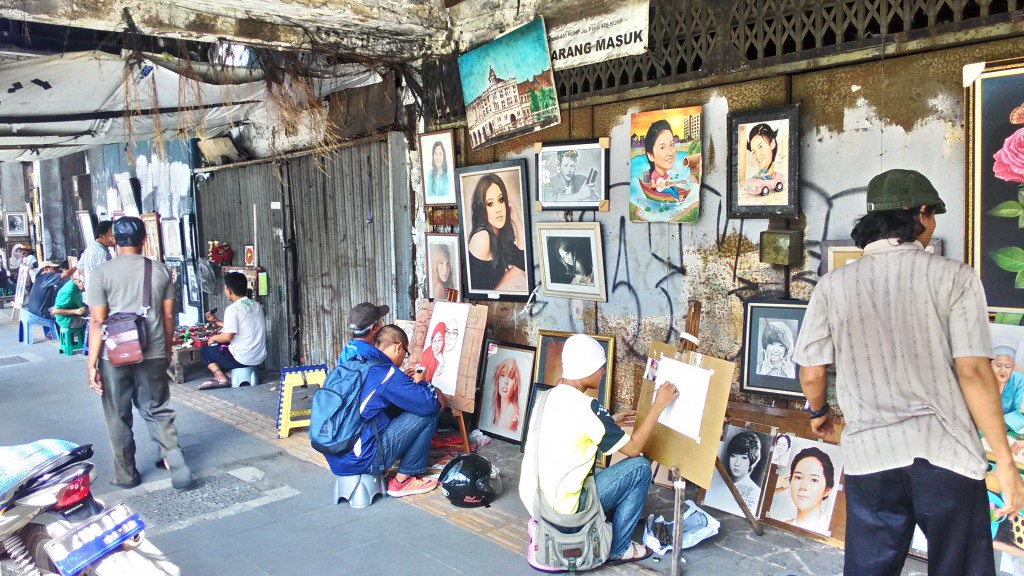 I was not very interested in the proud new buildings-I wanted to see the colonial remnants of the city once known as Batavia when it was the capital of the Dutch East Indies. For centuries the Dutch had asserted control of the network of islands that constituted Nusantara, the Malay Archipelago, fighting for prominence against the Portuguese, British, and Spaniards, while the bitterly divided local rulers slowly fell. Batavia itself had been carved out of the swamps, tens of thousands of slaves and labourers under VOC Governor General Coen constructing the canals and walls of the city following its capture from the English. Fortress Batavia had withstood a massive siege from the Sultan Agung’s massive forces, and weathered epidemics and insurrections that routinely killed its colonial inhabitants, and from there the Dutch had steadily built an empire that stretched from the northern tip of Sumatera all the way to Papua and the glaciers of Irian.

We first ventured into Glodok, Jakarta’s Chinatown, where the majority of the Chinese had lived at one point. They had initially lived in the confines of Batavia, but following riots and their subsequent massacre, the Chinese were condemned to living outside the city walls in 1741. It was just one of the many battles, riots, and demonstrations of violence that would wrack the city periodically over the centuries.

Glodok’s warren of streets teemed with familiar sights-seafood for sale on metal trays by the tiled roadside, tacky red lanterns fluttering in the breeze as shoppers squeezed their way through the narrow alleyways, stinking of desiccating vegetables and meat. Everyone spoke Indonesian there, even the old women in flower-print blouses, looking as if they would be right at home in the old parts of Hong Kong or Macau. In the years following President Soekarno’s ousting by the strongman Suharto, various decrees were passed and the new generation of Chinese was to speak only Indonesian, and names were to be changed with immediate effect. The Liems became Salims, and the Loeks became Loekmans. Roots were forgotten and remained unspoken, and I knew several people who were unsure of exactly who they were, their lineage muddled up in history.

Now the fractured collection of islands that consisted of a fledgling republic had finally consolidated itself into a single state under an iron grip. But this almost broke apart in the chaos that preceded Suharto’s resignation. The student riots that swept the country quickly degenerated into anti-Chinese riots in several cities. The reasons behind this remain unclear, buried in a murky tangle. I remember hearing a story from one of my former classmates, whose mother was Indonesian: in the days following the riots, his relatives decamped to his house in Malaysia, uneasy about the chaos that had wracked their cities. But on that afternoon in Glodok I could not see any hints of the violence. In Southeast Asia you can forget very easily.

Lunch was in Tak Hie’s Iced Coffee on Gloria Alley. It was not difficult to find but you needed to know where to look, darting past the furniture shops and street artists in the corridors. It was a local favourite, the coffee served with ice and condensed milk and sugar. The coffee was a welcome relief from the heat as I struggled to adjust back to the frothing humidity. I fumbled while ordering food in Indonesian-the language was based on the Court and Bazaar Malay spoken by traders who visited the islands, but the accent and some of the words were different. And this was not to mention the slang. The ladies at the shop spoke rapidly and I tried to adjust as quickly as I could. It was odd; if this was Kuala Lumpur I could have happily ordered in broken Cantonese but just two hours away, sweating in a coffeeshop that would have fit right into Section 22 I was speaking an entirely different language.

When lunch was over we walked back across the snarling street with its endless mid-afternoon traffic to Fatahillah Square where the stately Governor’s Office stood, imperiously dominating the skyline along with a collection of whitewashed colonial buildings. For centuries Dutch power had been concentrated there, and it was only in 1945 when Soekarno and Mohammad Hatta declared a hasty independence after the Japanese surrender. Now bored vendors sold trinkets and selfie sticks there, while the former VOC administrative office played host to the upscale Café Batavia. In front of us a girl in a red dress posed for photographs in front of the blinding white Office. The past was now a backdrop for the capital’s hipsters. 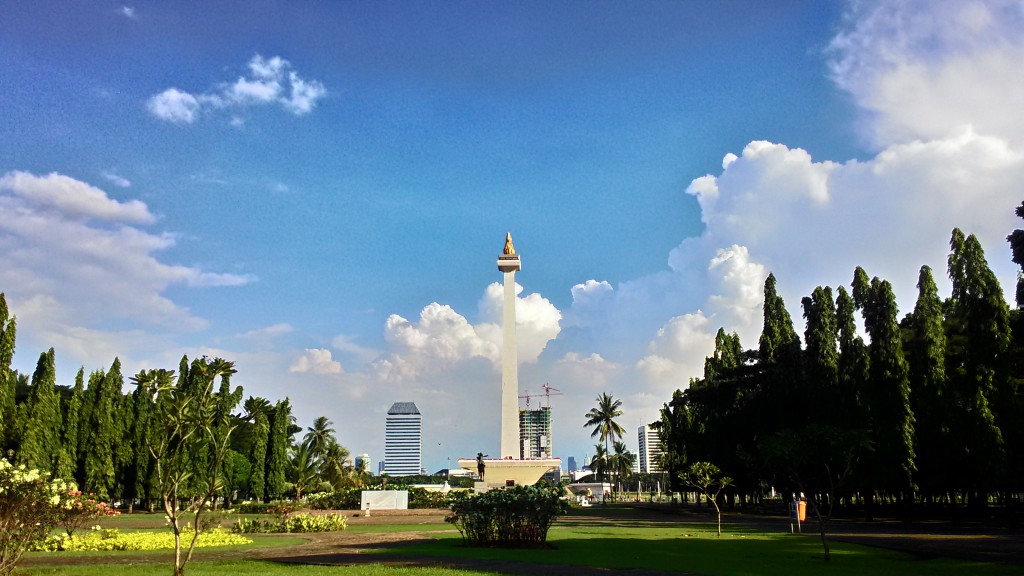 As evening beat down, we headed over to the National Monument. But even close to the monument the city’s infrastructure was crumbling. The pedestrian crossing buttons did not work. A thoughtless passerby had stuffed garbage between the wings of one of the garuda reliefs decorating the fence of the army headquarters. But still the city was still staggering from the air; in the distance was the sea, and when you turned around you could see clusters of skyscrapers poking out amidst the low-rises, dwarfing the impressive spires of the Cathedral and the great dome of the Istiqlal Mosque.

I stepped down from the edge, away from where the towers rose south of Menteng where a young ‘Barry’ Obama once lived with his Indonesian stepfather, and looked back towards my travel partner Jenn. She looked down on the city with a quizzical expression. Jakarta reminded her of the cities that she had seen during her many months living and travelling in Southeast Asia. It was yet another Southeast Asian city riddled with the insecurities of a colonial nation and making up for it with brash landmarks and gargantuan malls.

The other articles in this short series take place in Yogyakarta, Surabaya, and the Ijen crater. They form an informal ‘Java Quartet’-four stories about Java inspired by Pramoedya Ananta Toer’s ‘Buru Quartet’. Read more of the Java Quartet here.