This Earth of Mankind5 min read

William Tham continues his journey through Indonesia. Following his stop in Yogyakarta, he travels to Surabaya in East Java, en route to his final destination of the coastal volcanoes. 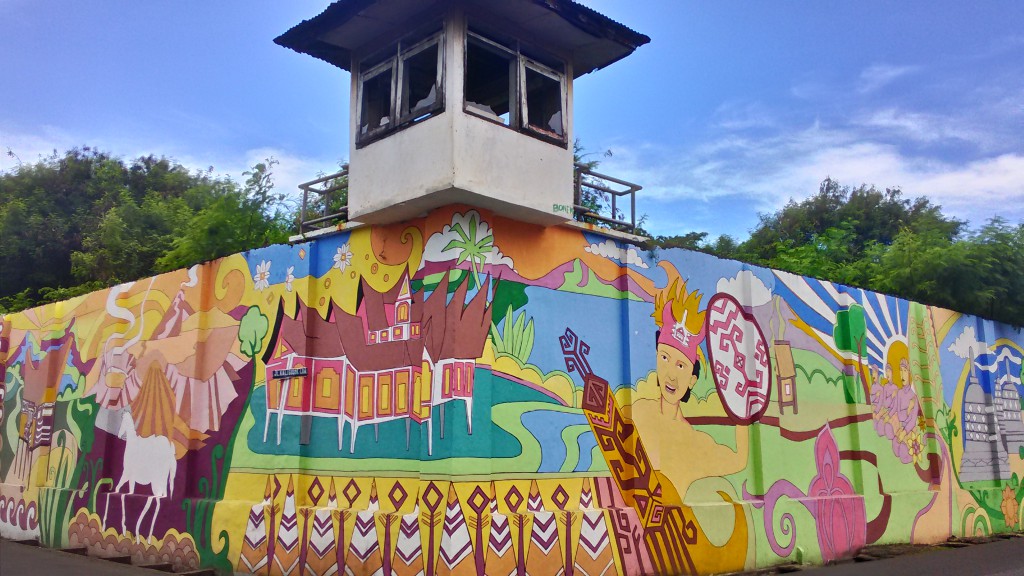 The wall of the now-defunct Kalisosok prison.

Big cities begin to look interchangeable after a while. They are instruments for living in, packed with people arriving from all over the country in search for work. Such was the case for Surabaya and its approximately twelve million people. Its past was studded with the names of powerful kings and the days of Dutch colonial rule, but I had little idea what to expect when we finally arrived in Surabaya late at night on the evening train from Yogyakarta.

The city was so spread out and the surprising scarcity of tall buildings made it hard to tell that we had arrived at our destination. We disembarked at Gubeng Station, lost in the middle of the urban sprawl. I knew that Madura, a traditionally poor island where the soil was poor and the work scarce, lay off the shore to the north. I knew that to the southeast lay the great crater of Mount Bromo, home to the Hindu Tengger people, spewing choking clouds of sulfur into the sky. But for then we were lost in the midst of what seemed like a city that haphazardly spread all along the coast.

I saw foreign visitors all packed up to go after complimentary breakfast at the hotel, dressed in sleeveless shirts and spouting enormous backpacks loaded with gear. They had arrived at Surabaya airport the night before and were off to Bromo as soon as their Dutch breakfast was over, skipping the city entirely as they hurried to the buses that would take them in the direction of the volcano. For them the city was just a transit. I guess you could say the same for Red Deer and Toronto. 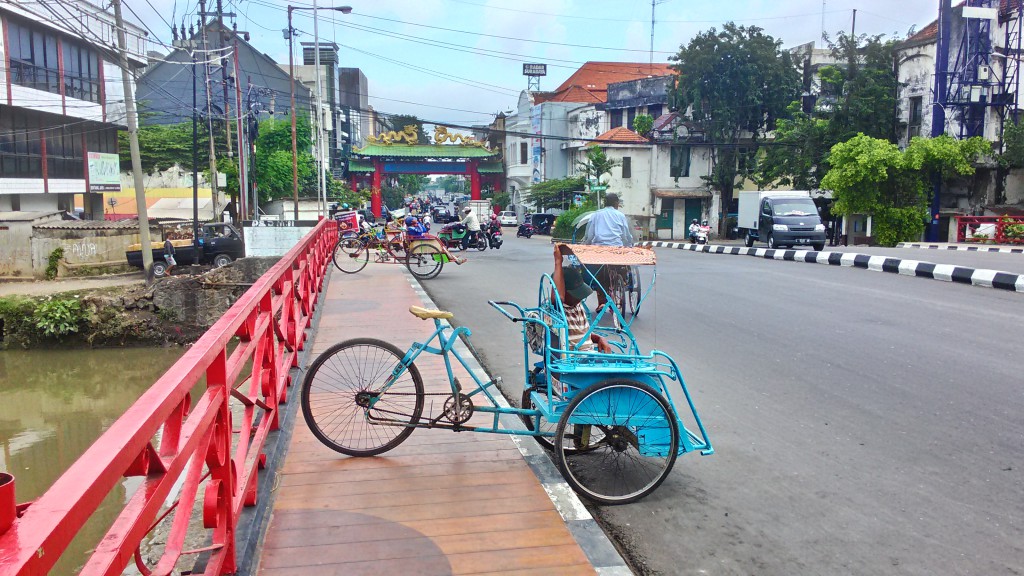 There are many stories to tell about this city.

Surabaya has some measure of literary fame thanks to it being the setting of Pramoedya Ananta Toer’s epic novel, Bumi Manusia. ‘This Earth of Mankind’ follows the adventures of a minor Javanese royal, nicknamed Minke, as he becomes entangled with the wealthy concubine Nyai Ontosoroh and her daughter Annelies in Wonokromo in the outskirts of the city under Dutch rule. A series of wretched incidents ensue, involving political intrigue, love triangles, and the indolence of local rulers in colonial Java. This was just the first of Pramoedya’s Buru Quartet, reconstructed from the stories that he told fellow political prisoners when imprisoned under Suharto’s rule on the isolated island of Buru, far out in the distant islands of the archipelago. He remained dogged by controversy right up until his eventual release from house arrest in 1992, eventually dying in 2006 after a lifetime of falling in and out of favor with political powers. His family continues earning excellent royalties for the rights to his works.

Besides that, one of the defining moments of modern Indonesia’s history occurred at the city’s Hotel Majapahit. Built as the Oranje by one of the Sarkies brothers, Armenians from Persia who had built a network of grand colonial hotels throughout Southeast Asia, it had once played host to luminaries like Charlie Chaplin and Princess Astrid. Eventually revolutionaries raced to the top of the hotel where the Dutch flag flew during the early days of independence. They ripped the blue stripe away, leaving only the red-and-white of the Indonesian flag behind. An appropriately dramatic cinematic representation can be seen in the film Merah Putih II. Today’s Hotel Majapahit, taking its name from the great kingdom that once dominated the region, is now an exclusive hotel with excellent food choices.

And of course there was the narrow Red Bridge spanning the Kali Mas, where a fierce battle broke out between nationalist militia and Allied peacekeepers. In the ensuing battle the fledgling forces of the newly-independent Indonesia earned Surabaya its nickname as the City of Heroes. Today the bridge still stands, close to the old Chinese and Arab Quarters. The men sitting on their becak call out to you as you walk past them on your way across it, wondering if you need to jump in to go somewhere. In the warren of the city’s narrow streets nobody walks.

It is very difficult to see the Surabaya of the past today. The city has changed so much that it could easily be any other place. I also once heard someone sighing that the past is easily forgotten. Sometimes people forget that Indonesia was once colonized. 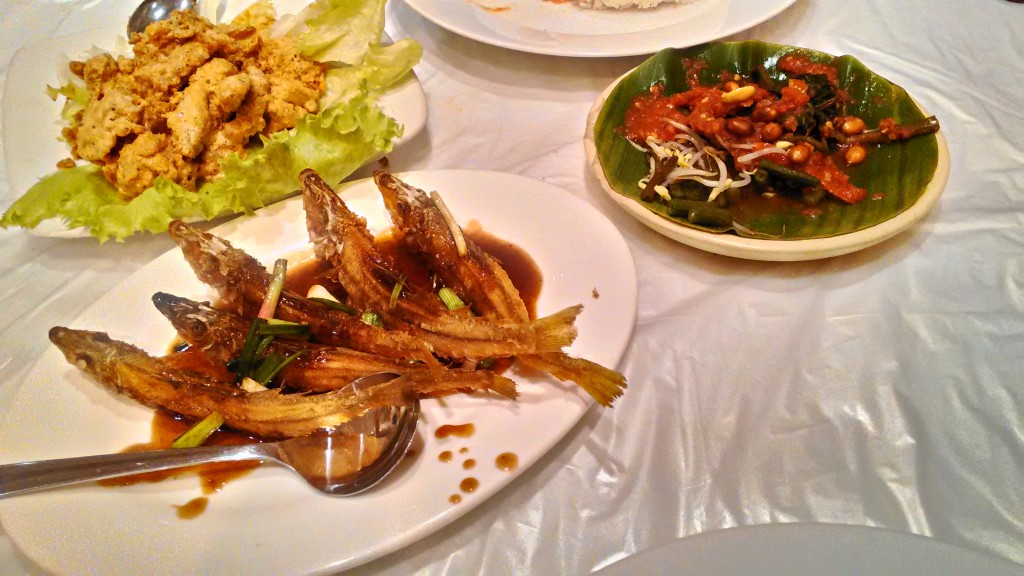 A friend of ours, who hailed from Surabaya, had happily recommended that we eat just about anything in the city.

“Everything tastes good,” Stefanus had said enthusiastically in the café of the Sauder Building at UBC when I brought up our plan to visit his hometown.

We had journeyed there in the vague hope of seeing him, but it turned out that he would not be in town for several weeks. But we still enjoyed the food. We started with lunch at the café attached to the House of Sampoerna, the museum dedicated to the company started by Liem Seeng Tee, a penniless Chinese migrant turned clove cigarette (kretek) mogul. And then there was the delicious food at Layar, where we finished with a bill that was massive by Indonesian standards. But we were not alone–all around us people were ordering copious amounts of Bintang Beer and salted-egg crab legs, some bills easily hitting the million Rupiah mark.

Dessert arrived. Es campur arrived: Beans, grass jelly, and chunky shaved ice slathered in sweet syrup. As we ate we chatted about the journey that we had begun thus far. in seven days we had crossed most of Java overland, passing through Jakarta and Yogya and now Surabaya. The next day we would leave the cities behind for the volcanic highlands of East Java, starting with touristy Bromo and ending at the vicious slopes of the Ijen Crater. But those were journeys for another day. For then our meal beckoned.

The rest of the stories in our unofficial ‘Java Quartet‘, inspired by Pramoedya Ananta Toer’s ‘Buru Quartet’ take place in Jakarta and the Ijen Crater. Photos by William Tham