In a follow up to The Big Durian, William Tham continues his journey through Indonesia, leaving Jakarta for the cultural hub of Yogyakarta in Central Java. 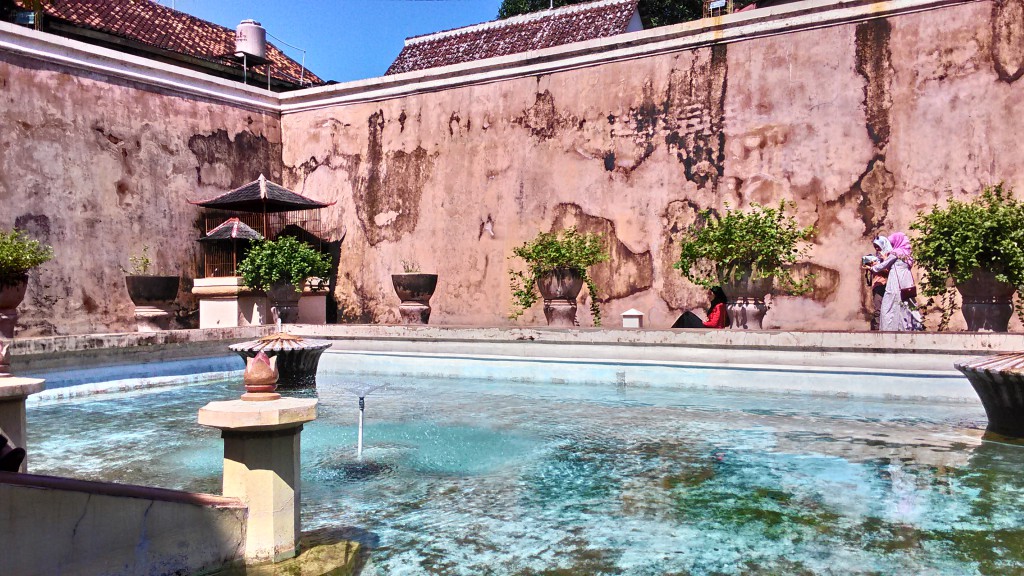 “Malaysia?” the gentleman called Pak Budi in a collared blue shirt asked me as we stopped dead at one of the little streets that criss-crossed the immediate surroundings of the Kraton, the palace of the Sultan Hamengkubuwono X lying in the distant shadow of volcanic Merapi. A funeral procession was underway and the tiny roads and mismatched buildings in the vicinity were confusing. Stepping off Malioboro Street with its rows of touristy shops, and towards the confines of the royal city, the streets assumed a medieval air, reverting back to a classical Javanese style that was at odds with the grand Dutch colonial buildings flanking the streets to the magnificent palace.

“Ya,” I replied, wondering if he had something to sell. “We’re looking for the Water Palace.” We were on our way to the Taman Sari (usually translated as the Water Palace), and had only succeeded in becoming hopelessly lost in the labyrinth.

“This way,” he continued cheerfully in Indonesian. Having learnt Malay when I was growing up, standard Indonesian was easy enough to adjust to, and I listened to his treasure trove of stories to tell as we stepped deeper into the maze of cluttered houses on an unexpected tour.

“In the past this place was under a lake surrounding the Kraton, set up for the pleasure of the Sultans. After an earthquake had wrecked the area, the then sultan invited landless subjects to build their homes in the drained lake. The only catch was that they were to serve as his servants. The new homeowners then became guards and cleaners in the palace,” Pak Budi informed us as we walked along.

He himself lived in the vicinity, in one of the little houses on one of the lanes. His family was from there and he was comfortable enough. He vaguely mentioned that he worked at the Kraton, but had Ramadan off–this was when I assumed he began his duties as a part-time guide.

“I worked in Malaysia once, near Kajang,” he reminisced. “Oil industry, there were a lot of Indonesians there. Good pay, but it’s very hard work and I was not a young man for long. I like Yogya much better.” 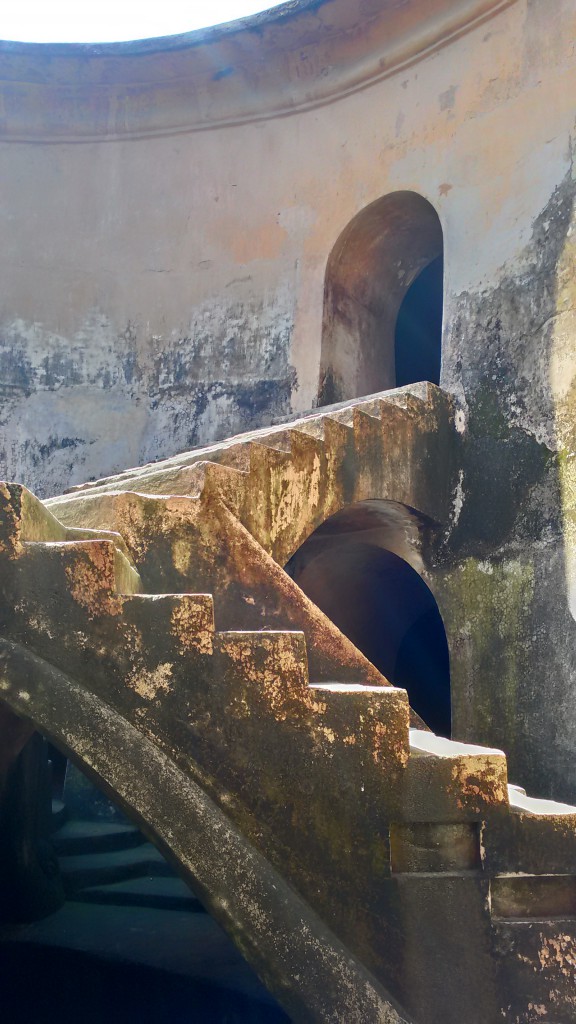 Central stairwell of the Underground Mosque

The Taman Sari was extensive, consisting of not only the baths, but at its peak a variety of buildings and beautiful gardens. First we ended up in the underground mosque. Built by Portuguese craftsmen, it had been commissioned by the first Sultan of Yogyakarta with his love for European architecture. The men prayed on the smooth floor of the upper story, and an Escher-esque staircase led down to the lower floor where the women were. In a corner of the women’s floor was the imam’s chamber, which pointed in the direction of Mecca. The stairs leading down were steeped in Islamic imagery, and its landing had sometimes been used as a podium where the Sultan once gave speeches to his subjects. In time of emergency a secret tunnel led from there to the Kraton; it had been sealed off for safety reasons. In fact the entire tunnel network was in constant danger of collapse. The recent earthquake which had shattered the ancient Hindu shrines at Prambanan had wrecked the curved tunnel ceiling, and the local authorities had put considerable effort into rebuilding the area.

The royal baths, with their aged pink walls and delicate architecture, proved charmingly impressive. High brick walls stood, protecting the royal family from prying eyes. In the old days it must have been a remarkable sight–a flotilla of boats from the mosque arriving at the shores surrounding the bath complex, depositing the royal entourage for a wash before they enjoyed the evening gamelan musical ensemble. The sultan would first depart for his private pool, cut off from the rest of his retinue by an ornate watchtower. The royal children splashed in their own pool, while the concubines stripped down and used the one next door. Once he was finished with his bath, the Sultan would retreat to the upper floors of the watchtower, where he could survey the other pools in private from behind wooden bars. This was done for the purpose of selecting a favourite concubine from the fray of swimmers, and she would be summoned to his tower.

The tower itself came equipped with a bedroom, a sauna heated from below with charcoal for cold nights, and engravings steeped in Javanese symbolism. The carvings above each door were remarkable–a palisade of geometric domes represented Islam, the branches of a massive tree were Hinduism, and the peaceful birds in the upper layers depicted the Nirvana of the Buddhists. All three religions had left their mark on the island of Java, arriving in waves over the centuries. It was eventually Islam, preached from the nearby caves, that had eventually dominated the island. With that the last Hindu kings finally departed Java for Bali, where they remained until the Dutch arrived. But here in the royal city traces of the three religions remained, seeping into the stories of the people.

The call for afternoon prayer sounded.

“Do you need to pray?” I asked Pak Budi, who was smoking a cigarette nearby.

“Ah, I don’t do it five times a day,” he said casually. “I don’t fast either. But that’s not important in Islam–what’s important is the purity of your own soul. I’ve seen people who pray religiously but remain wicked–that is terrible.” 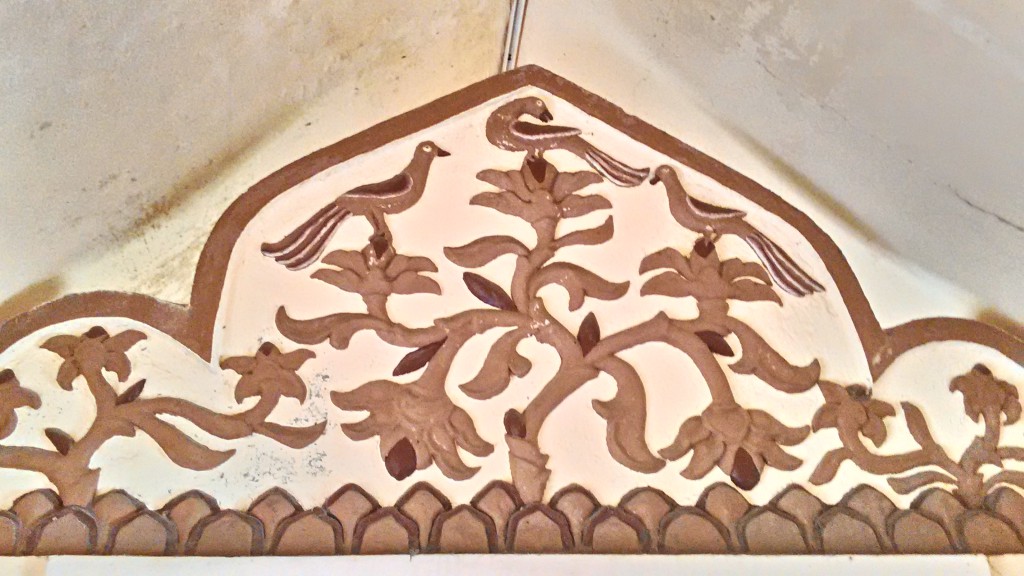 The Sultan is now one of the few royals left in Java, and practically the only one who still wields political power. In addition to his duty as the city’s Governor-for-Life he takes on his role as the protector of Javanese culture seriously in the streets surrounding his palace. Everything sold in the area was subject to his approval, be it batik, trinkets, and civet coffee-we sampled it at a small shop while a pet civet snoozed outside in the drowsy heat. Yogyakarta had been spared the brutal modernity of Jakarta, maintaining its grids of low-rises and competing mosques whose calls for evening prayer filled the city with an echoing that seemingly stretched infinitely, reaching every nook and cranny in the region.

On the surface the Sultan’s kingdom was in order, happily flourishing. But that may not be the case. Javanese culture is slowly eroding-already, many people can no longer read the elaborate script or speak the courtly language. Transmigration has dealt another blow and the people of Java are moving about, trying to find money in a rush for new wealth following economic stagnation during the tyrannical Suharto decades. And even the city’s traditional status as a centre for higher education is eroding–students have their institutions to attend in Jakarta and Bandung, and Yogyakarta is gradually emptying out. But for that day it remained locked in time.

The rest of the stories in Ricepaper’s ‘Java Quartet‘-inspired by Pramoedya Ananta Toer’s epic ‘Buru Quartet’-take place in Surabaya and the Ijen crater.